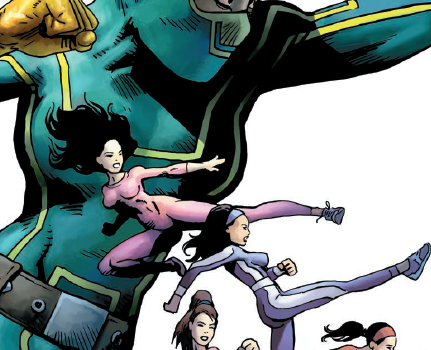 Summary: Joined by a quartet of new allies, Patience cleans up the streets in this fun and engaging new entry.

Patience is cleaning up the streets and this time she has help. When four of the girls she’d previously rescued from Santos show up—in matching outfits, no less—Kick-Ass is more than willing to accept their aid. When they track down one of the drug suppliers for the new cartel that’s moving in, she quickly discovers that they’re just as capable at kicking ass as, well, herself. She’s also continuing to sit on the money gained through her street cleaning operation, while destroying the drugs she pulls in. At the same time, Maurice still wants his cut of her money and it leaves one to wonder just how long she can stick to her code when her secret identity is on the line. Written by Steve Niles, illustrated by Marcelo Frusin and colored by Sunny Gho, Kick-Ass #14 is here!

This issue is a little more lighthearted than some of the previous entries. In particular, the fight in which she and the new girls bust into a drug den and start kicking ass has a certain campy appeal that’s almost a throw back to a more innocent age of comics.

My only real complaint was the part where she lets a bad guy go after saying she stuck a tracker to him. I don’t necessarily need to be shown every small detail of the story, but it seemed like a bit of a cop out—and I kept flipping back through the pages to see if I could spot where she slipped the tracker onto the thug.

Maybe my eyesight is failing me in my old age, but I couldn’t see anything that even hinted at a tracking device. Plus using a tracking device seems a bit inconsistent with some of the technology we’ve seen her use so far. It’s a minor nitpick, but one that stuck with me to the end of the book.

The new girls are a fun addition to Patience’s crew, and it’ll be interesting to see them get more backstory in the future.

Before I go any further, I just want to say that I love the art. The characters, the scenes, the shading is all done in a style that makes sense to the world in which Patience and her adventures are rendered. Characters features are bold and expressive, shadows are dark and ominous, and the action scenes are filled with the sense of motion and impact.

My one small thing that I noticed was when I was flipping through looking for aforementioned tracker (I know, I just can’t let it go). One of the thugs had an inconsistent tattoo on the side of his neck. At first I thought maybe *that* was the tracker, but when I flipped back, he didn’t have it in one scene and then he had it on the other side of his neck in another. In all honesty, I probably wouldn’t have even noticed if I wasn’t looking for the device.

But like I said, the art IS still pretty great.

Fun and engaging are two ways in which I’d describe this issue of Kick-Ass. There were a couple of small things which prevent me from giving it a perfect score, but it’s still definitely a fantastic read. 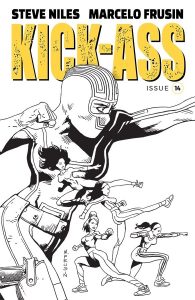 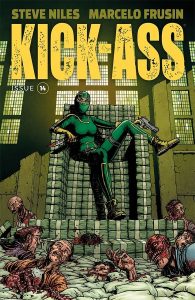