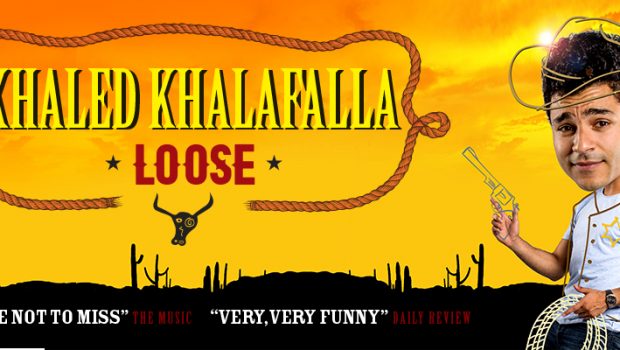 KHALED KHALAFALLA | Brings his new show Loose to Sydney for one night only at the Comedy Store this July!

Khaled Khalafalla (Upper Middle Bogan, Ali’s Wedding) is Loose, cheeky and one of Australia’s fastest rising stars. After a sell-out season at this year’s Melbourne International Comedy Festival, Khaled is bringing his hit new stand-up show to Sydney’s Comedy Store for one night only on Friday 14 July.

Khaled has been dubbed the next “huge mainstream star” by The Age, featured by news.com.au in their “hand-picked guide to film’s fresh faces and shooting stars — the seven actors who are going to be everywhere in 2017” and by The Daily Telegraph as one of nine entertainment “faces to watch in 2017: meet the fresh new faces that will have us talking this year.”

‘This guy can do no wrong. Everything he touches turns to gold. He’s taking steps forward every day and it’d be a crying shame if you missed him in action.’ – The AU Review

★★★★ ‘Khalafalla is raw and witty, leaves the audience in stitches…This is one not to miss.’ – The Music

Khaled’s abrasive, edgy comedy has already seen him perform alongside the likes of Arj Barker, Eric Andre and Jim Jefferies in venues across the country: from Melbourne’s Town Hall to Sydney’s Allphones Arena. Having lived in eleven cities across three countries, the Australian Egyptian’s worldliness and fresh, intelligent social commentary is a welcome addition to the comedy scene and has seen him awe audiences across the globe – from royalty in the Middle East to Australian troops in Afghanistan to the invitation-only New York Comedy Festival.

‘Khalafalla steals every scene he’s in, making being funny seem easy along the way.’ – news.com.au

‘Among a sea of comedians that flood the Melbourne International Comedy Festival, Khaled Khalafalla stands out’ – Herald Sun

With his compelling looks and intelligent social commentary, Khaled is a force to be reckoned with. After hosting a TV show (Studio 3 for ABC3), his first major acting role was co-starring in the feature film Ali’s Wedding directed by multi-award winning Jeffrey Walker (Modern Family, Bones, Angry Boys). Soon after Khaled landed a regular co-starring role on ABC’s hit series, Upper Middle Bogan.

He’s had his stand-up filmed and aired on SBS’s Stand Up At Bella Union, ABC’s Comedy Up Late and featured in the Just For Laughs’ Stand-Up Series filmed for the Comedy Channel at the Sydney Opera House. Khaled is making waves on-screen and off, and outgrowing every venue he performs in.

Don’t miss Khaled- live and Loose at Sydney’s Comedy Store for one night in only in Sydney this July!

GENERAL PUBLIC ON SALE
Begins: Wednesday 24 May (10am AEST)