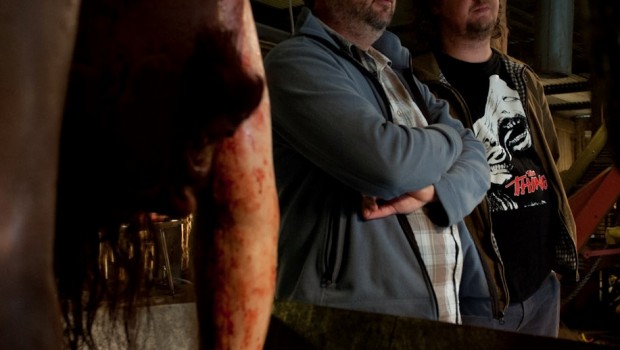 It can be announced that Meegan Warner (Turn, The Veil), Olivia DeJonge (Hiding, The Visit), and Ian Meadows (The Moodys, The Pacific) have all been cast in major roles for SCARE CAMPAIGN. Warner is currently starring alongside Jamie Bell in Season 2 of the AMC TV series Turn, and features in the upcoming Blumhouse horror The Veil. DeJonge stars in M. Night Shyamalan’s latest film The Visit. Other roles have gone to Sigrid Thornton (Sea Change), Cassandra McGrath (Wolf Creek), and John Brumpton (The Loved Ones).“We have assembled a formidable cast” comments director Colin Cairnes, “including the cream of Australia’s next wave of acting talent, along with some Aussie acting royalty.”

For Producer Julie Ryan, SCARE CAMPAIGN marks her second feature with the Cairnes brothers after 100 Bloody Acres, “I’m very excited to be making another film with the Cairnes brothers and fans of 100 Bloody Acres are not going to be disappointed. The brothers are original storytellers and this one has scares a plenty with a number of twists to keep people guessing” says Ryan. SCARE CAMPAIGN also reunites key crew from 100 Bloody Acres including Director of Photography John Brawley, and SFX and Production Designer Justin Dix.

SCARE CAMPAIGN charts the increasingly extreme attempts of a horror-themed TV “prank” show to stay one step ahead of its nihilistic online rivals, “the film will be packed with jolting scares and suspenseful set pieces.” says Cairnes. Aptly, shooting commences this week at the Mayday Hills Village previously known as the Beechworth Lunatic Asylum in Victoria. “Our script screamed out for a location steeped in history and dripping with atmosphere” continues Cairnes. “Beechworth Ghost Tours, who operate nightly explorations of the asylum, have been especially helpful in showing us the spookiest corners of Mayday Hills”.

Australian distribution for SCARE CAMPAIGN will be handled by Bonsai Films and Madman Entertainment, with international sales by Films Distribution. “We learnt a lot from the 100 Bloody Acres release” comments Ryan, “and we’re aiming to connect with our fanbase earlier via social media throughout the shoot, post and release phases”. Cairnes also points out that the international audience will be key to the success of SCARE CAMPAIGN, “this doesn’t mean going out of our way to water down the “Australianness” of the film, but it does necessitate our meeting the expectations of a sophisticated, genre-savvy international audience, and respecting their desire for big, bold ideas and polished execution.”