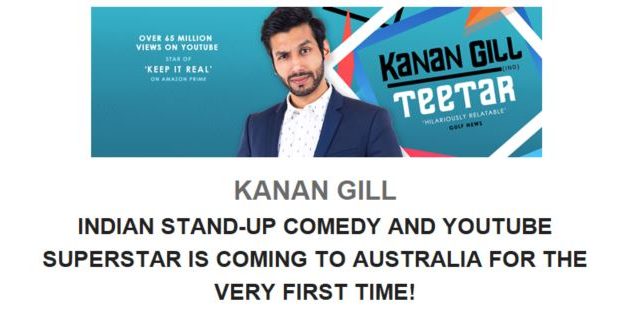 Indian stand-up comedy and YouTube superstar Kanan Gill is coming to Australia for the very first time with his solo show Teetar! In this personal, observational and deeply stupid follow-up to his wildly successful 2017 hour, Kanan juggles thoughts and ideas about everything from Julius Caesar’s death to bands and building societies. You’ll also learn what Teetar means.

After starting a career in software engineering, Kanan Gill has found incredible fame in a totally unrelated field. After making his start in stand-up Kanan joined forces with fellow comedian Biswa Kalyan Rath to launch their hugely popular YouTube series reviewing Bollywood films. The hilarious Pretentious Movie Reviews swiftly picked up tens of millions of views on YouTube, and every clip they upload still regularly collects views well into the millions. Kanan has since ventured into Bollywood himself, with a role in Noor starring Sonakshi Sinha.

‘A bucketload of laughs’ – Insider (IND)

Don’t miss the superstar Indian comedian on his first ever Australian tour – tickets will not last long!