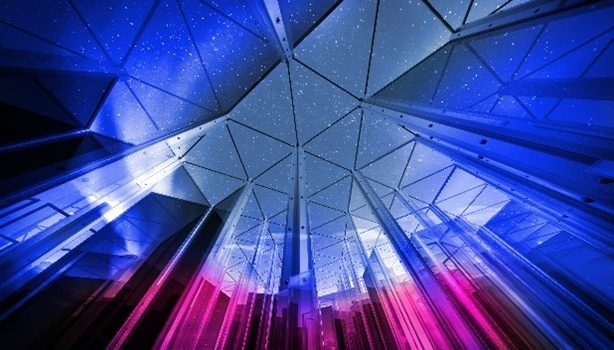 Kaleidoscope, an installation by Keith Courtney to premiere at Arts Centre Melbourne

Kaleidoscope – 700sqm of glass, steel, mirrors and moving prisms – will premiere at Arts Centre Melbourne’s forecourt from 1 June – 10 July as part of the RISING program. Visitors navigate a maze of corridors witnessing a slowly revolving display of light and colour. Motion and gravity are distorted and spaces fracture, surprise and disorientate the senses at every turn.

Drawing on the time-honoured charm and simplicity of the kaleidoscope to create a larger-than-life immersive symphony of light, colour and sound, this large-scale new immersive artwork has been designed to warm the heart and temper the soul.

Keith Courtney is one of the masterminds behind the acclaimed House of Mirrors and 1000 Doors which also featured on the Arts Centre Melbourne forecourt in 2017 and 2018 respectively. This latest work has been developed in collaboration with visual artist Ash Keating, composer Tamil Rogeon and artist Samantha Slicer alongside a team of highly skilled technicians.

House of Mirrors, a labyrinth of mirrors playing on the classic sideshow favourite, premiered at MONA’s Dark MOFO in 2016 and went on to tour 12 major cities across the globe, including Singapore, Auckland and Toronto, attracting more than half a million visitors and is now part of the MONA collection. 1000 Doors premiered at the Melbourne International Arts Festival followed by a 10-city tour of Australia and New Zealand.

Keith Courtney says: “No one will have the same experience in Kaleidoscope – this is a multi-sensory and at times physical experience where the visitor is completely submerged in sound and light – a vortex of serenity to somewhere or nowhere.”

Arts Centre Melbourne Director of Programming Edwina Lunn says: “We are honoured that installation artist Keith Courtney has chosen to bring his latest and greatest large-scale work to Arts Centre Melbourne. Keith’s previous projects at Arts Centre Melbourne received both critical and public acclaim. Visitors to Melbourne’s premiere arts precinct will once again leave with a totally transformed view of reality, having experienced a new kind of engagement with beauty and tranquillity.”

Kaleidoscope will then head to the Brisbane Powerhouse from 11 August – 3 October followed by an international tour.

Kaleidoscope has been supported with funds from the Restart Investment to Sustain and Expand (Rise) Fund – an Australian Government initiative.

Tickets: Standard $15
Children 5 years and under FREE
Persons 75 years and over FREE

Further tickets to be released soon.