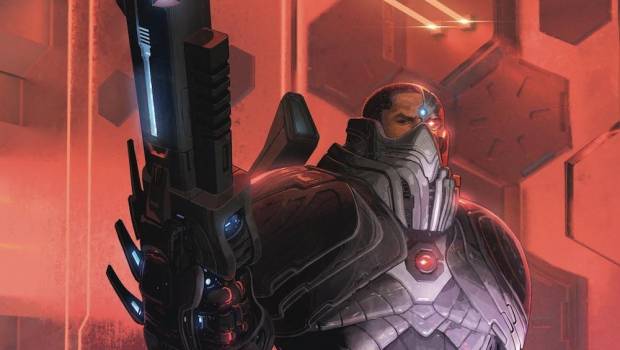 Summary: Look, the book is fine. The art is great and the cast is interesting. But the thing is, why should we care about any of this? I’d be surprised if this title went back the 25-issue mark. The book is solid, but totally unremarkable.

The Story: Jessica Cruz’s weird but awesome Justice League take another step in their war against Darkseid.

Background: Holy crap that was a surprise ending! (Not really, but to be fair, we haven’t seen this person in 20 years so… Yeah!)

Summary: Orion and Jessica has been captured by the God Xotar, who was chosen by Darkseid to defend him at all costs. As the two are tortured, an altered Cyborg lurks in the background, pinging away. The rest of the team attempts to get to a position to rescue them, but first Dex-Starr, Blackfire, Hax have to deal with a bunch of self-replicating androids. Realizing that while he may not have superpowers he does have a brain, Hax hacks the droids and shuts them down by blocking their signals.

Back to Jess and Orion, Jessica tries to get through to Victor but it is to no avail. He has been completely taken over by the mother box. Both are about to die when they are freed by Gamma’s tiny robot friends. Orion summons his armor and the game is on. The issue ends with Blackfire, Dex-Starr and Hax encounter Epoch, the Lord of time, Back from a 22-year (in real life) exile.

Look, the book is fine. The art is great and the cast is interesting. But the thing is, why should we care about any of this? This book branched out from Metal which was supposed to lead into the Justice / Doom War. The fact that we now know THAT was a giant waste of time leaves this book a little orphaned. Is Darkseid aiming to just be a helper of sorts to the ideal of doom? Darkseid originally was supposed to be part of the team and to be honest, that sounded a lot more appealing than what we got in the core of this book, which is basically another “Darkseid is evil and we have to stop him” story.

There are some good points though.  As I said earlier, I love this makeshift Justice League. The fact that Orion is featured is great (although he says that he’s not Justice League, which I guess infers that he’s never been a part of the League, but didn’t Doctor Manhattan bring the past back?) Dex-Starr is a welcome sight every chance we see him and now that Morrison is writing Green Lantern, Dex-Starr is the only other colored lantern currently being featured in the DC universe. Hax and Gamma are a little thin on characterization, but they are still pretty new to the medium.

Before I wrap this up, let’s talk about Epoch. I first discovered Epoch in the JLA/WildC.A.T.S. team up from 1998. When I read that comic I thought it was the greatest thing ever (I was pretty darn young so cut me some slack.) Looking back, the story was crap, but Epoch was actually a fairly good opponent. He could use his time armor and abilities to do such things as generate red solar energy blasts, change time, and tried to kill the leaguers when they were kids (specifically Wally West.) He was defeated when Zealot stabbed him through the chest with her sword and Grifter shot him in the eyes. He was last seen floating around time… totally discorporate. While we’ll never know how he got back, he’s back.

I’d be surprised if this title went back the 25-issue mark. The book is solid, but totally unremarkable.