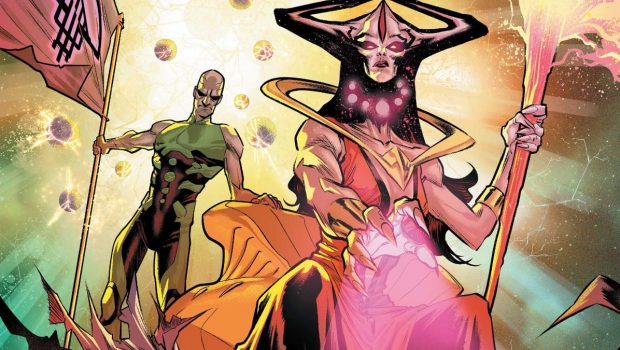 Summary: The heroes vs. the villains in a massive battle. We get splash pages. We get cars in space. We even get the death of a major character. Yet, a lot still seems hollow.

The axis tilts. Luthor wilts. A hall on stilts.

The Story: It’s an all out battle for the fate of every universe.

Summary: Luthor gives Batman one last chance to back down. Jarro tells Luthor off and it’s away to the races. Thousands of Apex soldiers run towards hundreds of heroes. Inside the hall, Aquaman, Superman, Ted Knight, Farris Knight, Alan Scott, Flash and Wonder Woman all stand in a circle surrounding the totality (which I guess Perpetua just … left?) They try and focus back towards Justice in attempt to remove the Doom Sigil from the sky, but an explosion rocks the Hall and they fail. Ms. Martian tries to pierce the sigil to call for help but it’s no use. They need Hawkgirl and her wings.

Meanwhile, in space wherever they are, Hawkgirl and Shayne are just about finished when a car horn is heard. John rams the Anti-Monitor with the Flashmobile so hard that he loses cohesion with his captured brothers and they split away from him. With that, the Anti-Monitor calls for help from his mother.

Perpetua is giving Earth-44 one last chance to submit to her. Dr. Will Tornado and his robot League tell her to go to hell. Just as she is about to destroy the universe of Earth-44, she hears her sons cries. Instead of destroying them outright, Perpetua literally picks up their Earth and hurtles towards the heroes’ location.

The World Forger has no power left. Being stuck with his brother has drained him. He decides to sacrifice himself, so the League has a chance to win. He uses the energy that the colliding planets will generate to spark his hammer of creation to generate a portal home. The Forger dies (and maybe the Anti-Monitor does as well… but that’s unclear).

The heroes are falling. There are just too many soldiers. Just as Luthor shoots the Hall Of Justice down, the heroes inside feel a renewed sense of strength. Something is supercharging them. Luthor, thinking he has won, starts to gloat, but is stopped in his tracks as John Stewart, Hawkgirl, Ms. Martian, Barry, Arthur, Diana, and Superman all walk out of the ruins, glowing with energy.  The tide has shifted back towards Justice. Here.We.Go.

Final call: Well, that was interesting. The fact that Perpetua left the League within reach of the totality seems really dumb and convenient, but let’s chalk that up to villain hubris. I still don’t entirely get what is up with Kendra’s wings. Are they attached to the totality or the source wall? Considering that is a major part of the story, it really should be clearer.

In terms of the art, we finally get some double splash pages! The villains rushing forward looks great, but the hero pages is where it’s at. I can make out every single hero in each League and Society, and a special shout out has to go to Guy Gardner’s face. It looks hilarious.

Here’s the major problem: I’m still not connected to this like I should be. When the heroes fight the villains, I’m invested, but I just couldn’t care less about Perpetua. We all know these worlds are coming back. Plus, with just two issues to go in this story (and Snyder’s run), there is a lot of stuff we still have to get to. Here’s hoping issue 39 is a double-sized issue.