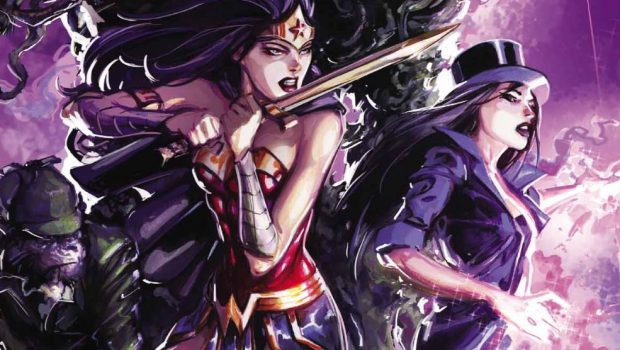 Summary: Justice League Dark #6 concludes with the fate of Myrra and the arrival of the otherkind!

Justice League Dark #6 returns readers to the magical world of Myrra as the skeleton hoard once again rises at nightfall as the undead attack the capital as Blue Devil explains the predicament this world is in. So while Blue Devil shares a moment with the Justice League Dark, Detective Chip (aka Bobo) apologies to the now deceased Nightmaster (aka Jim Rook) for unleashing death into this world before he is imprisoned.

Detective Chimp has never been ‘responsibel’ a day in his life.
– Blue Devil

Back on Earth, Phantom Stranger attempts to talk some reason into Doctor Fate who is now controlled by the legendary Lord of Order, Nabu and not his protege, human Kent Nelson. However Nabu strongly believes that when they brought magic to Earth, they destabilized the order of things and for reality to survive, magic must be torn from its fabric. Not the answer that the Phantom Stranger was looking for, he prepares to throw the first ‘punch’ in this battle of magical powerhouses.

However Nabu easily defeat the Stranger by entrapping him within one of the universes most powerful magical artifacts, the helmet of Nabu. With the Phantom Stranger gone, Fate focuses on John Constantine who warns him that if he is wiped from existence, many Kings of Hell will be gunning for this Lord of Order and rather than kill him, Nabu traps him within the helmet.

Do you understand how little power it would take to simply wipe you from existence, like the foul excrement you are?
– Nabu, Doctor Fate

On Myrra we learn that Bobo attempted to bring back Nightmaster back from the dead and as a result, he unleashed the chaos of undead that Myrra now faces. So while the warlocks of Myrra believe that only the death of Bobo will end the threat, the Justice League Dark are looking for other solutions. We also get an emotional scene between Bobo and Wonder Woman with our favourite chimp disclosing his life to her, including why he wanted to bring the hero of Nightmaster back from the dead. Rather than waiting for the solution, Diana hands Bobo some mead and breaks him out of his death cell.

Detective Chimp is also given the opportunity of redeeming himself that by re-reading the spell that was meant to bring Jim Rook back to life, he finds a way to end the terror on Myrra. After their victory, Detective Chimp and Blue Devil talk about their victory, their losses and that Jim’s son, the true heir of the Sword of Night is out there and that Bobo must find him. The story ends back on Earth with Zatanna receiving a bloody clue on her arm as John Constantine somehow cuts ‘find Mordru’ on her as Swamp Thing arrives on the scene and warns them that the Otherkind are now here.

James Tynion IV and team bring another entertaining and action-packed issue of Justice League that is not only well-writtem but boasts some great world-building and fantastic art that helps bring this tale to life. 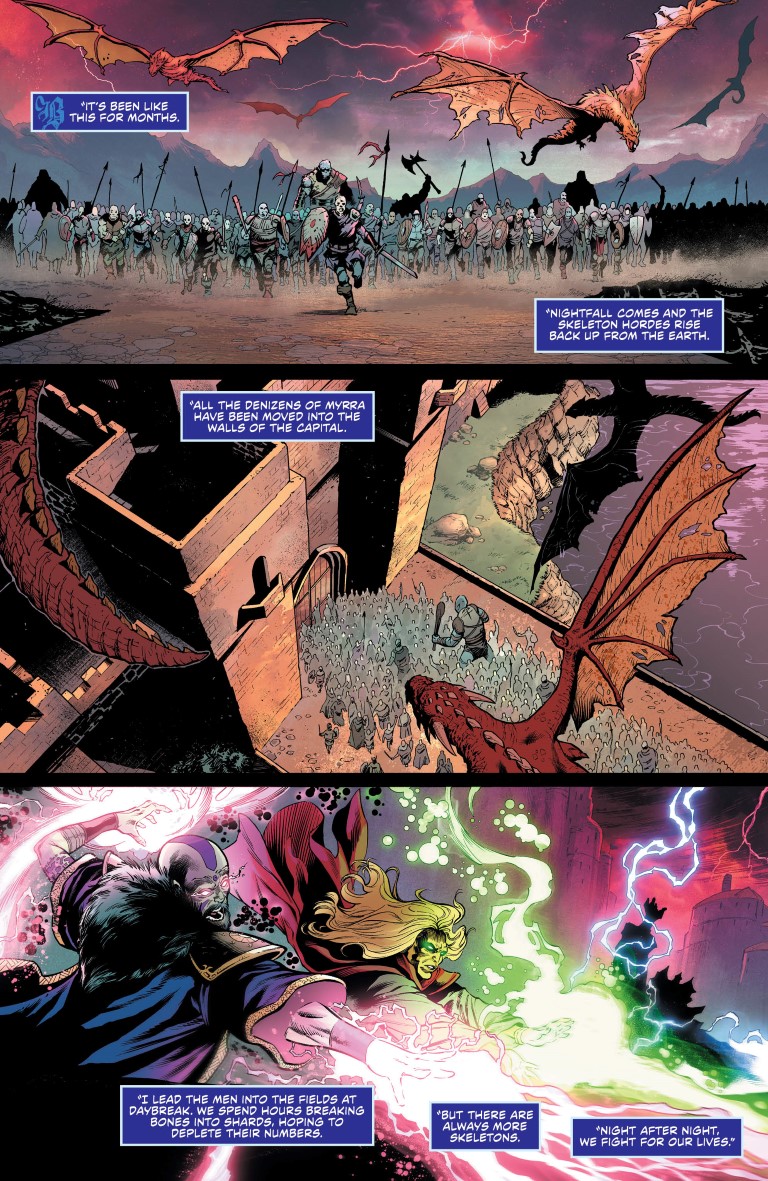 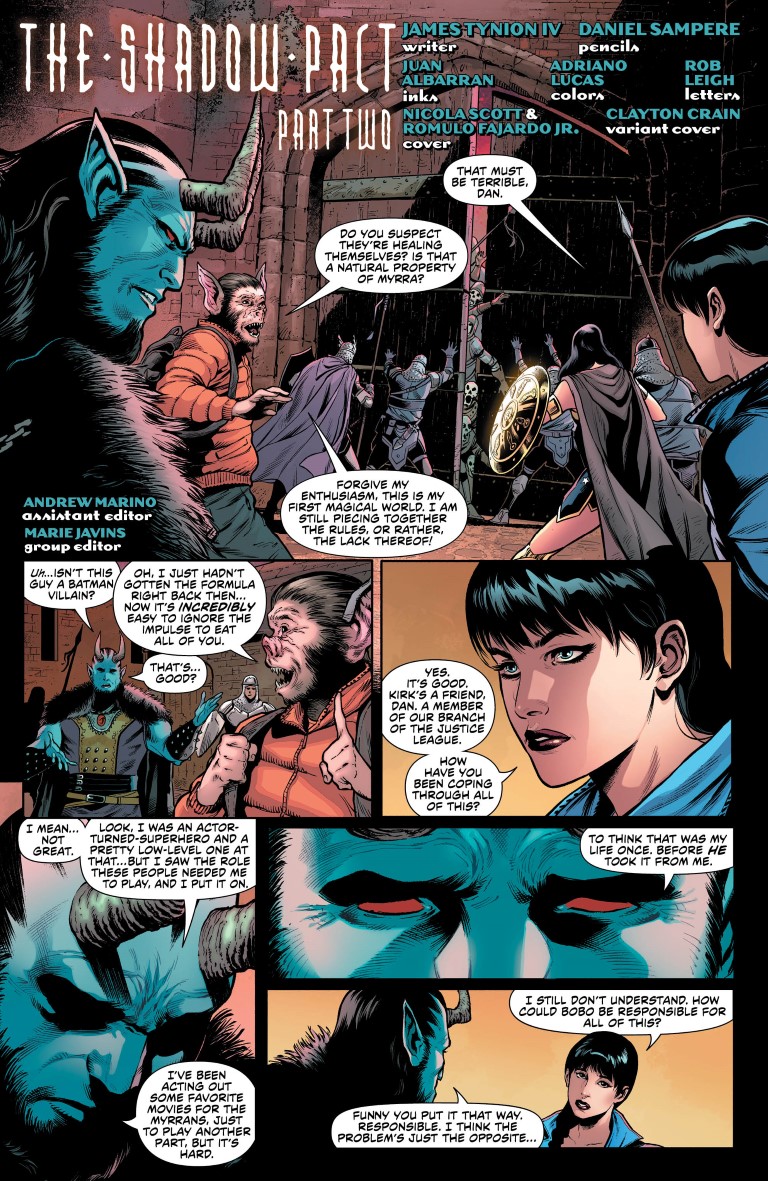 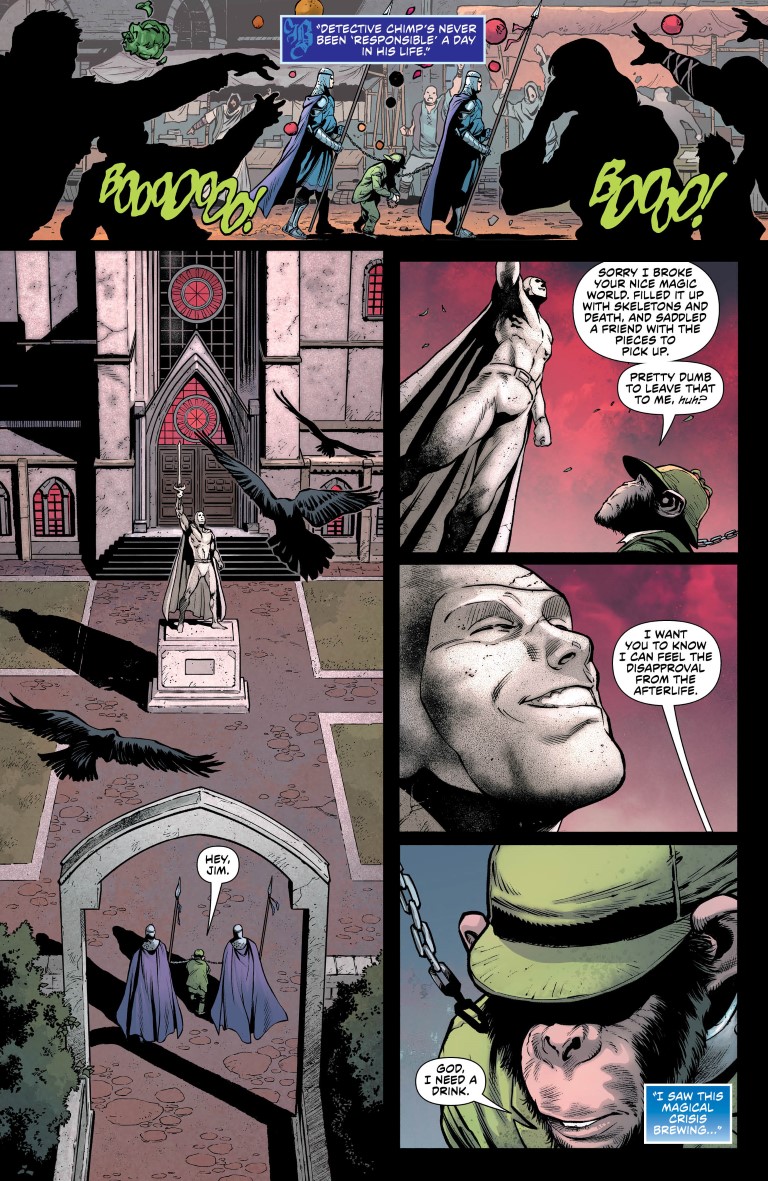 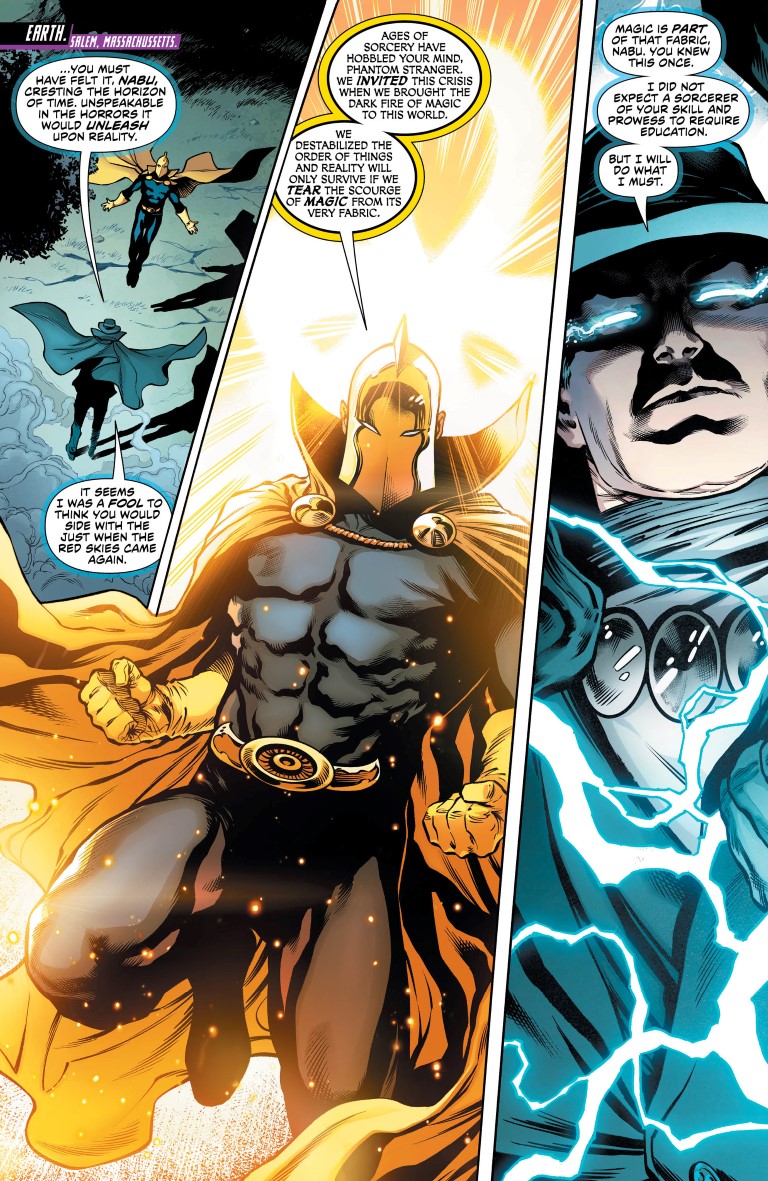 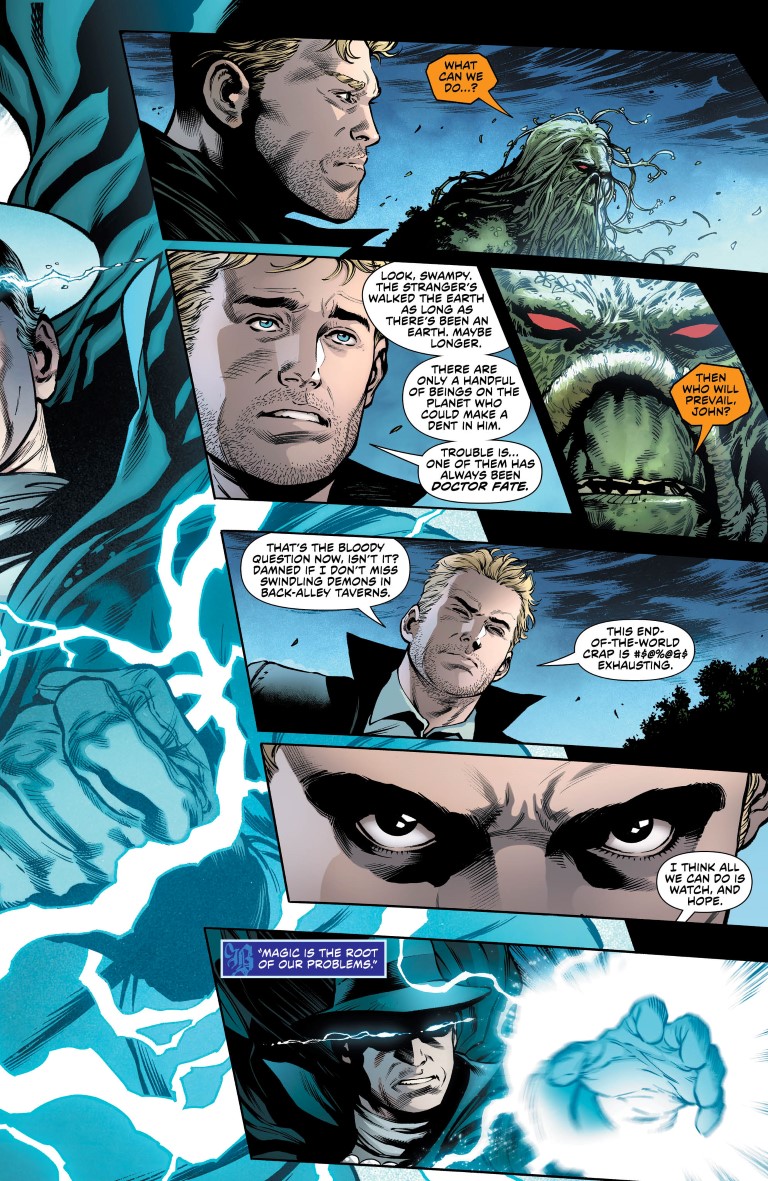 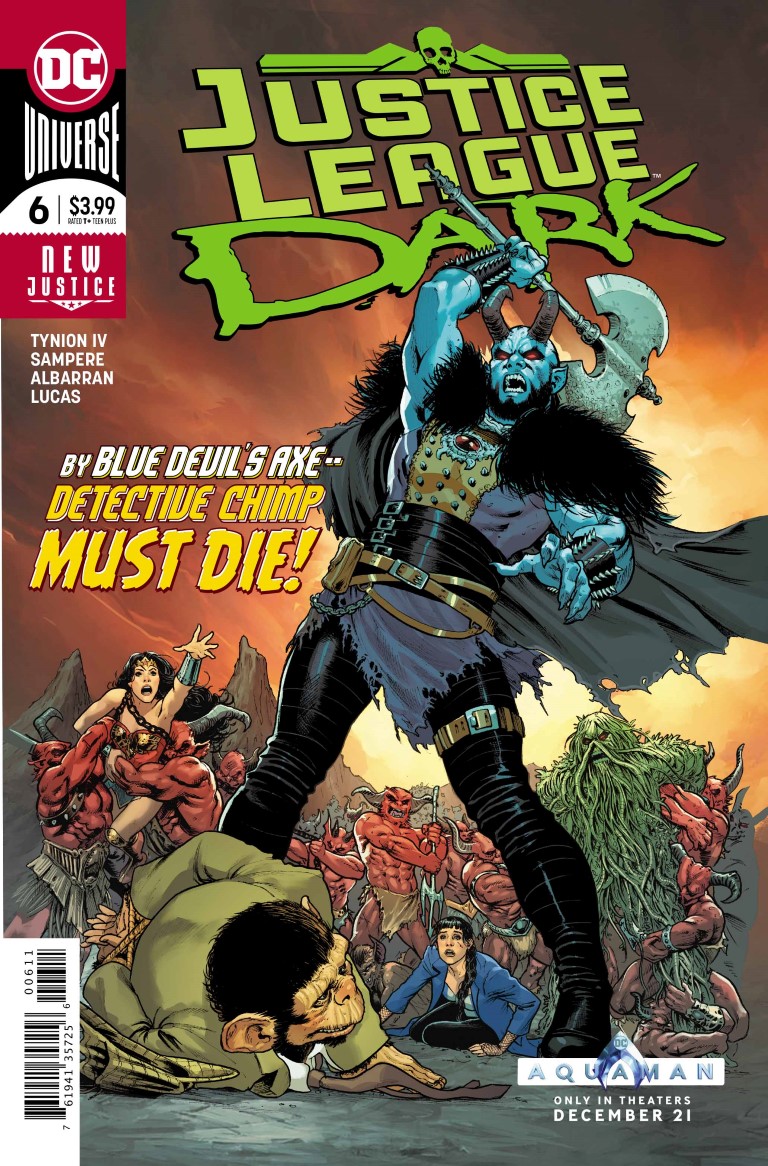 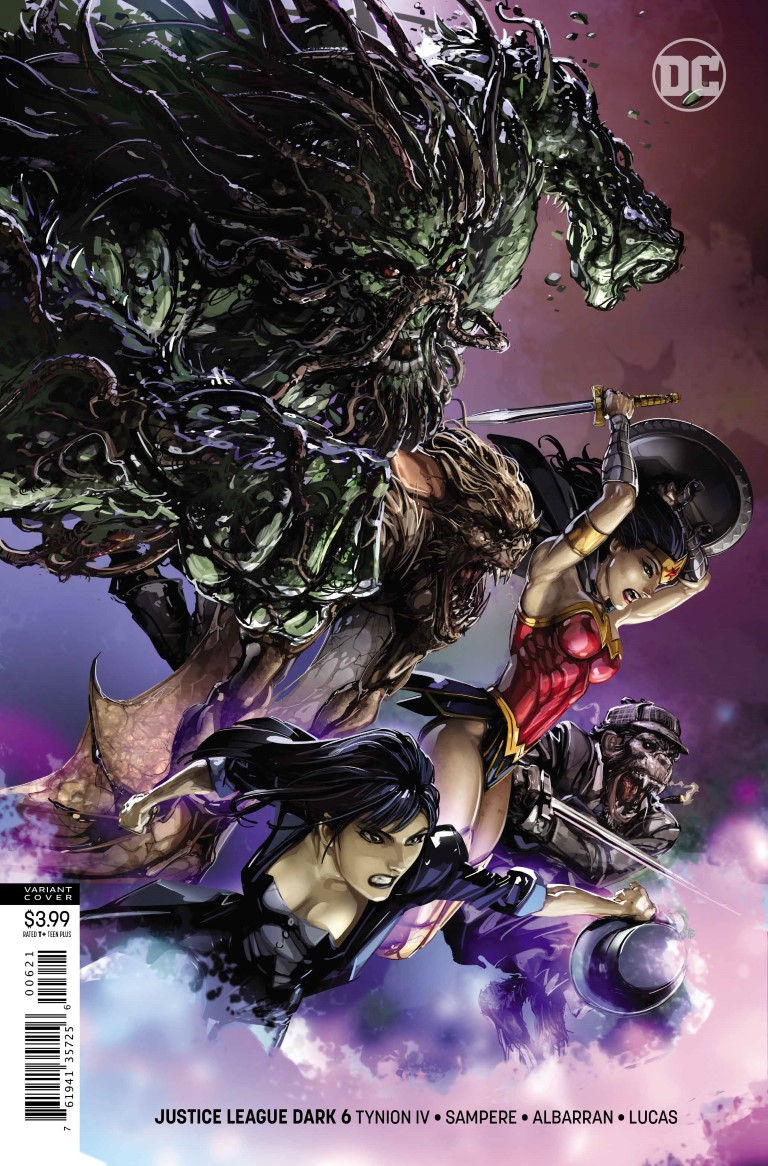