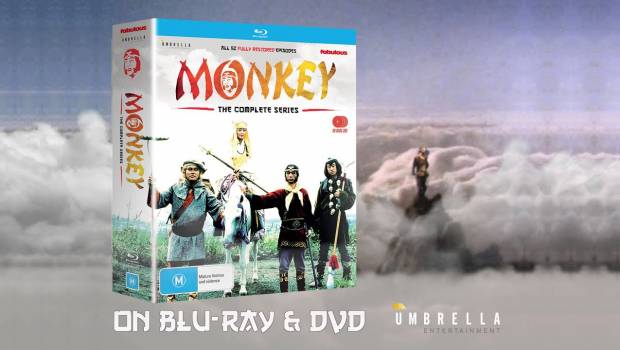 Summary: Monkey the Complete Series on Blu-ray is a love letter to fans of this amazing TV series of the 70's and 80's!

Primal chaos ruled the worlds before Monkey. Monkey was born of time, of Heaven and earth, sun and Moon, out of a stone egg. He was irrepressible!

Monkey: The Complete Series has arrived on Blu-ray (reviewed) and DVD, making this the definitive edition. If you grew-up in the late 70’s or 80’s and loved “Monkey Magic”, this box set from Umbrella is a must have for your collection. Furthermore, Umbrella should receive a medal for this release because it’s been fully restored and remastered to give it a much needed shine. Best of all, this set contains all 52-episodes of this classic TV series, including 13 that were never shown on Australian TV and as a bonus, the distributors include two episode guide booklets. 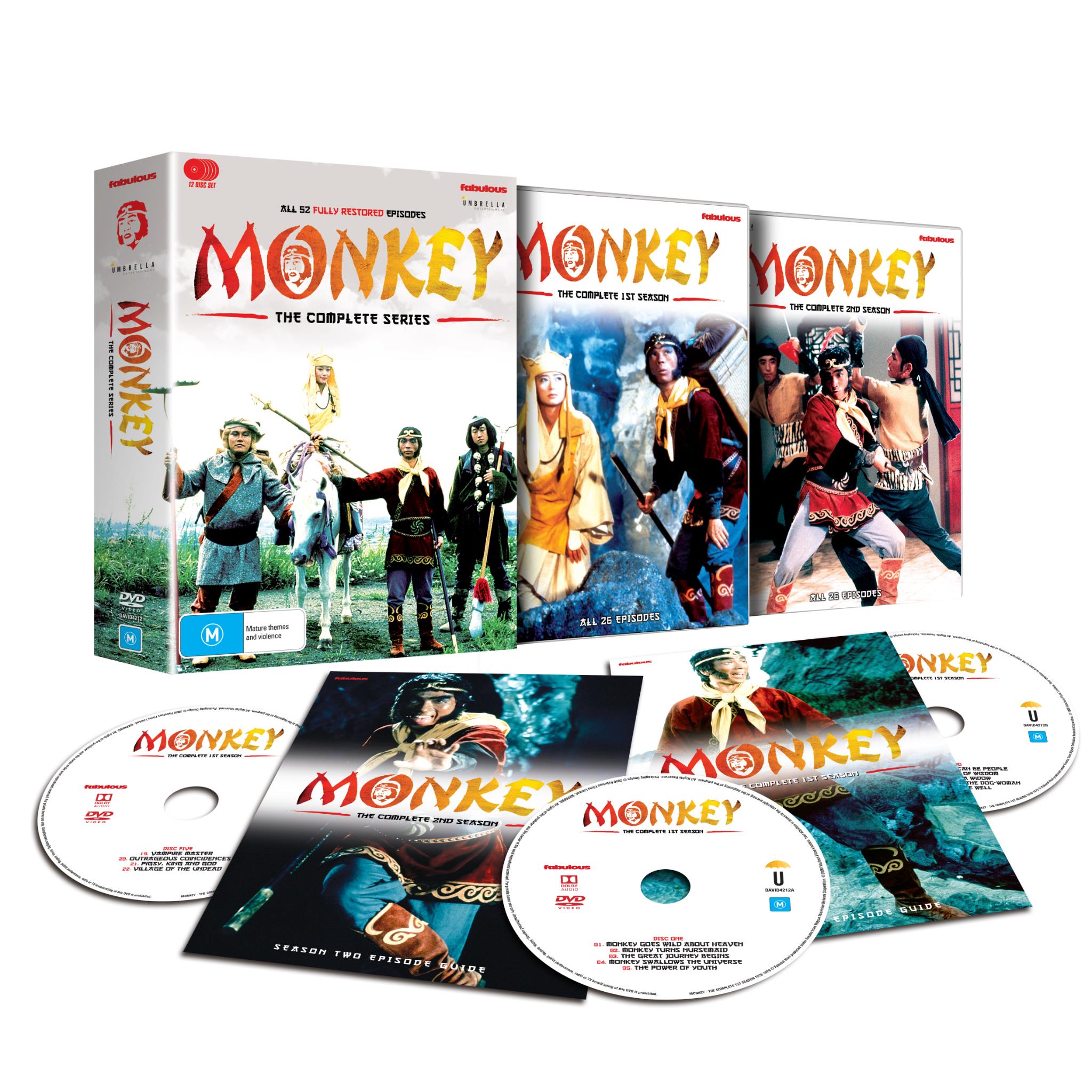 For the uninitiated or for those that need a refresher, the TV series was based on the Chinese classic, Journey to the West (or Saiyuki in Japanese) that followed the adventures of Buddhist Monk Tripitaka as he travels from China to India in order to retrieve holy scriptures to save the world. (#: Fun Fact: Actress Masako Natsume played the role of Tripitaka  in this TV series)

During this time, the world was rife with monsters, more nefarious people than you can poke a magic quarterstaff with and oodles of demons. In order to protect our young monk, he has a motley crew of animal people that include a Monkey, a fish Monster called Sandy and a lustful Pig spirit called Pigsy that together went on one of the world’s most extraordinary adventures. Oh… there’s even a horse who was once a dragon and is evolving to become a human. However what made this TV Series a hit, particularly in Australia was the over the top and hilarious dubbing, special effects and even more over the top fight scenes. It was the perfect panacea to the child of the 70’s and the 80’s and I still remember pretending be these characters with my friends, even making Monkey’s sacred staff out of a broom. Needless to say, a cult classic!

While it was dubbed into English, it was also perfectly cast as each of the actors helped bring their perspective characters to life, especially with their facial expressions and emotions. These actors included Masaaki Sakai as the enigmatic and angry Monkey, Toshiyuki Nishida as the womanising Pigsy, Shiro Kishibe as hungry fish spirit monster Sandy and their leader who helped keep them in check, Masako Natsume as the pious monk Tripitaka. Unfortunately Masako Natsume passed away in 1985 from leukemia who gave the show some humility. Also, half way through the actor who played Pigsy was replaced by Tonpei Hidari who was a little more serious but needless to say, this cast helped cement Monkey into pop culture and the series still has legions of fans from across the globe. So before we jump into our review, here’s a short Trailer below;

As there are 52 episodes on this Blu-ray, there is a total of 2317 minutes of Monkey Magic Madness goodness that is almost 39 hours of pop culture entertainment and it’s a shame that it wasn’t released a little earlier for those still caught in lock down from the COVID-19 pandemic. Each episode of this TV series focused on a particularly predicament or adventure that Tripitaka and her disciplines were involved in, including a lesson for her human “animal” spirits because these guys always messed something up. There was plenty of shape shifters disguised as human, including gender bending and not all the monsters were evil as sometimes our heroes learned the hard way. Further to this, morals and following the righteous path played a key component to most stories as they traveled this dangerous path from China to India.

In relation to the unaired episodes that were not screened in Australia or other parts of the world such as the United Kingdom, Fabulous Films LTD reunited the majority of the voice acting cast together to dub these episodes into English and the result is quite flawless. I remember watching the series as a kid and the last episode that was aired on TV didn’t finish the series that well as everything was still left in the air.

Besides re-watching the first three episodes of this amazing collection that helped draw me back into the world of Monkey Magic, including the origins of the characters, particularly around Monkey who was imprisoned and then “given” to Tripitaka for servitude for his crimes against the Gods, including his headband that she … err.. he could control if he misbehaved, my new journey started with episode 39 called You Win Some, You Lose Some that has the team encounter a man called Shotenki who does the biding of his demon master Kokufki. They soon discover that this duo are luring the towns men into their gambling rooms where they are trapped as the women and children of the village are forced to do all the work of the men.

Even Pigsy and Sandy succumb to their gambling magic and it is up to Monkey and his trusty quarterstaff to defeat the villains and free the male villagers. After watching this episode, it was great coming back to the world of Monkey and surprisingly the series is quite dark when you look at it as an adult. These unaired episodes also feel more mature in terms of their content but it’s still firmly grounded in this universe. While there is no definitive ending to the journey of Tripitaka, in the last episode “Monkey’s Learning”, Monkey is finally given some “peace” from his redemption where he catches and befriends a young thief called Chou and unexpectedly falls in love with his mother Shugyoku who is a true pacifist, even though her husband was killed by a demon. It’s another classic monkey episode! However in terms of favourite episodes, you really can’t beat the first three as it unites the gang together and really sets the scene of what’s to come. There’s also some quite scary episodes and as a kid I remember the episode called the Village of the Dead give me the heebee jeebees from its creepiness.

As the original series was filmed in an aspect ratio of 4:3, there is a noticeable difference between this remastered version and modern TV series. However if you look for original Monkey YouTube content, the difference between the remastered version is quite a contrast as it definitely looks clearer, sharper with improved colours. Sure, there are some elements like noise which creeps into the video but all in all, it’s quite an impressive release from Umbrella and really helps immerse you into this over the top series. Audio works well and while it is just DTS-HD 2.0, it is clear with balanced levels and nothing sounds muffled or distorted.

Monkey the Complete Series is also the perfect panacea to help take your mind off COVID-19 and enter a truly bizarre yet wondrous world.

“In the worlds before Monkey, primal chaos reigned. Heaven sought order. But the Phoenix can fly only when it’s feathers are grown. The four worlds formed again and yet again, as endless aeons wheeled and passed. Time and the pure essences of heaven, the moisture of the Earth, the powers of the sun and the moon worked upon a certain rock, old as creation. And it became magically fertile. That first egg was named “Thought”. Tathagata Buddha, the Father Buddha, said, “With our thoughts we make the world.” Elemental forces caused the egg to hatch. From it then came a stone monkey. The nature of Monkey was irrepressible….”