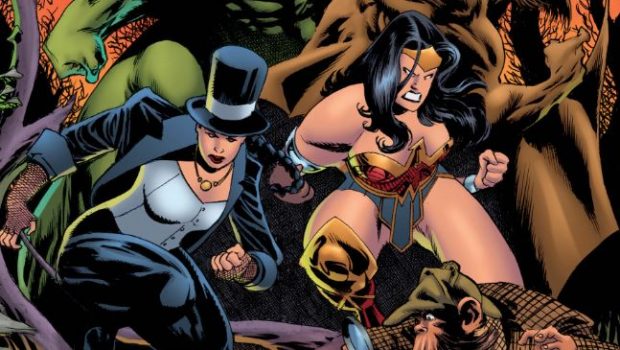 Summary: Justice League Dark#10 delivers the answers and one of the greatest threats to magic in the DCU!

The issue opens with Nabu who is in full control of his host Kent Nelson discussing the upcoming danger from the Otherkind with his kin, the Lords of Order. While these holier than thou creatures attempt to reason with Nabu, our disgraced Lord of Order reminds them that they were once men before they gained a foothold in the Sphere of Gods and gained absolute power. He also notes that they saw the world in chaos and through magic and their champions, they attempted to bring order to Earth but failed.

Nabu gives them a solution by allowing the Otherkind to feast on the world’s most powerful magic users and then the Lords of Order will destroy the Sphere of the Gods, the true source of magic and as a result these invaders will eventually die as will magic on Earth… including the Lords of Order. While the Lords of Order agree with Nabu, an interloper makes himself known with Khalid Nassour who overhears his old mentor discussing their plan. As this disgraced ‘god’ attempts to kill his former host, Kent Nelson still has some power over his body that prevents this murder as Khalid is turned into a vase by Nabu in order to prevent others from knowing the plan of the Lords of Order.

Back in the present, Khalid is recounting this tale to the Justice League Dark and the denizens of Myrra as they prepare to flee while Nabu’s newly formed Lords of Order destroy this magical world. Meanwhile Wonder Woman and Zatanna find more information on the whereabouts of Mordru, a Lord of Chaos who might have the power needed to stop Nabu and his Lords of Order… although Circe has other ideas. The issue ends with one of the Lords of Order offering those on Myrra a choice, be stripped of their magic and live or die.

Another interesting and engaging issue by James Tynion IV with some spectacular art by Alvaro Martinez Bueno who draws a mean Dr Fate. While relatively obvious how this story arc will end (e.g. The Justice League will be powered by the Lords of Chaos and Dr Fate will get a new host *again*), it’s going to be an entertaining journey nonetheless. 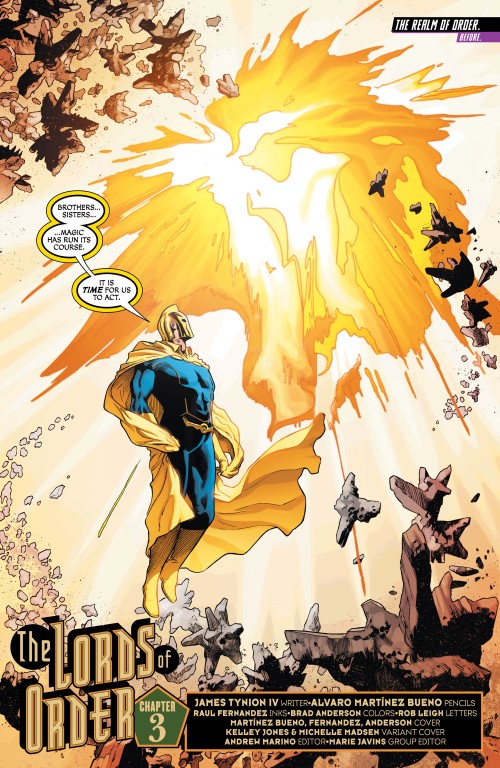 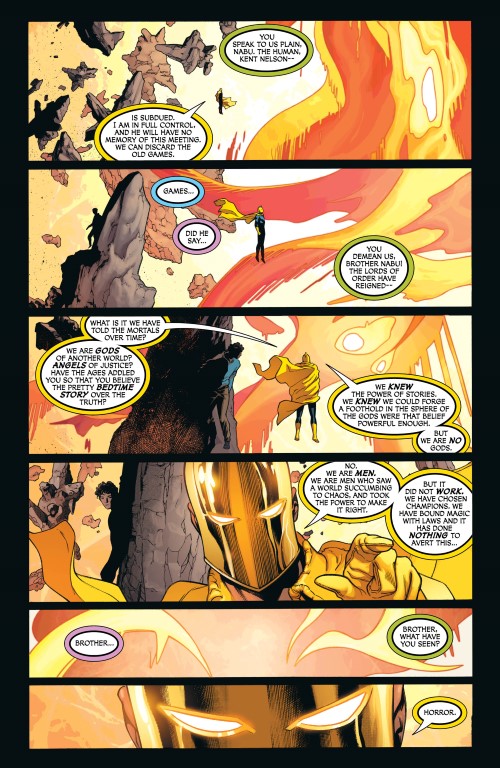 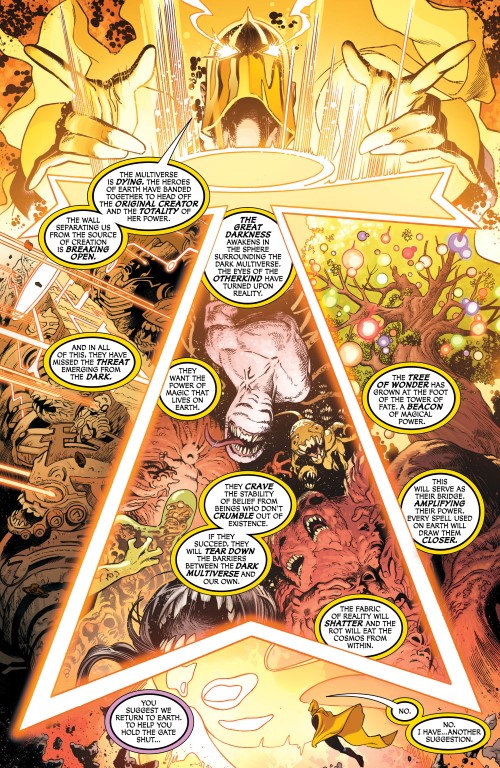 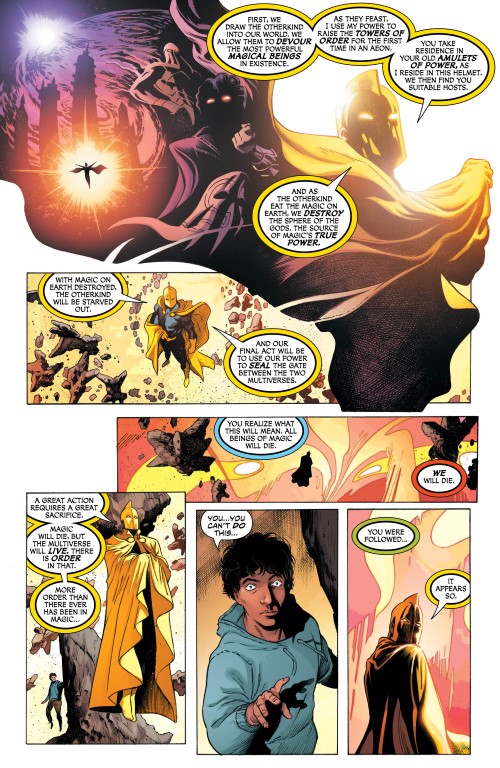 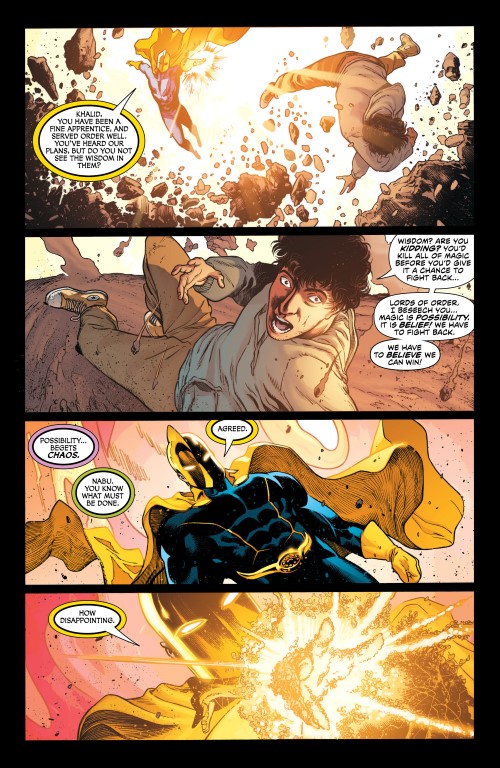 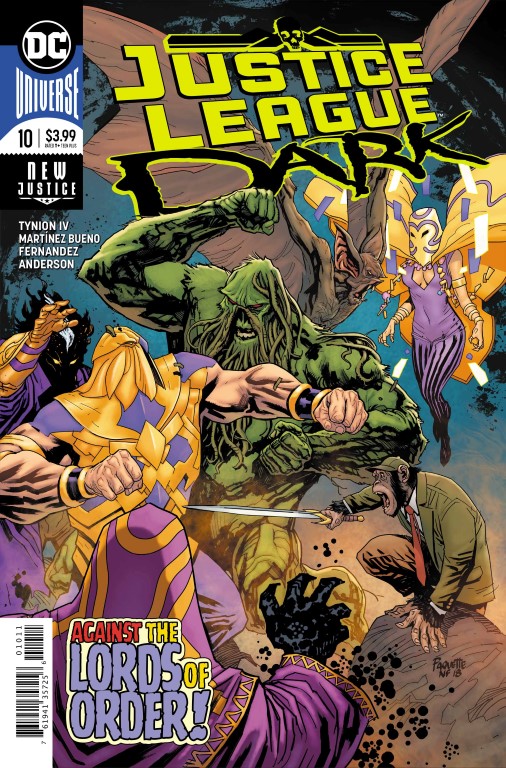