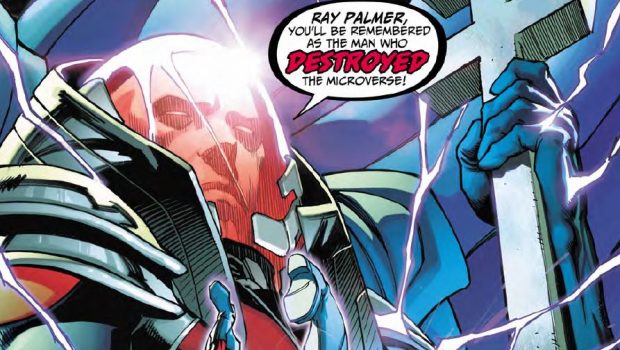 Justice League of America #16 Review (Panic in the Microverse!)

Justice League of America starts with a classic cover of yesteryear as the nefarious Dr Aron Aut proudly states that Ray Palmer will be remembered for the man who destroyed the Microverse! However before we get to this point, writer Steve Orlando and artist Felipe Watanabe successfully deliver a times past tale about who Dr Aron Aut is.

Although once a caring denizen of the Microverse, a disaster had twisted him into something darker and he was using Ray Palmer, the Silver Age Atom as a catalyst for his nefarious plans. So when Ray realises the error of his ways, it is too late as Aron reveals himself to be part of The Null who believes that by speeding up the destruction of the Microverse, it will return this universe to a state of order.

Ray however does get the upper hand on “Aron” but at a cost and Orlando revisits the scene from Rebirth as Ryan Choi (the current holder of the Atom mantle) gets the urgent message from his mentor. This comic ends with Aron thanking the League in helping him return to the ‘world’ as the battle for the Microverse is about to begin.

Steve Orlando delivers another enjoyable read that helps set the scene of the Microverse and hopefully like the Dark Multiverse that Scott Snyder is creating elsewhere, this new lore of the DCU may play a place in the future, provided it doesn’t implode thanks to his world building. In terms of character building, this issue focused more on Aron and his motivations that was accompanied with some detailed art thanks to Felipe Watanabe who helped bring this story to life, including some stunning splash pages.

All in all, a sturdy issue from Orlando and team as story arc kicks into another gear in Justice League of America #17.