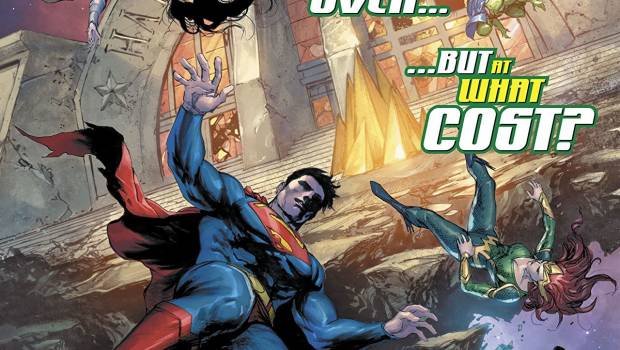 Summary: Snyder didn’t even try to stick the landing. Instead he bounced the plane off the runway and back into flight. You have not reached your final destination.

The Story: The heroes lose in the most irritating way possible.

Background: Well, this run didn’t end like I thought it would.

Summary: Jon is alive! His first action is to immediately unite the others telepathically and speak to the people of earth. Jon implores them to lend them their faith and belief. He employs them to be positive and uplifting. To think of justice… and then they lose. The unthinkable happens. The people of Earth CHOOSE doom. Perpetua laughs, telling the league that she wanted them to try, because in the end she knew she would win. The League is transported to the moon where the Doom sigil can be seen.

Things look hopeless. The League truly lost. Yet, there is still a vestige of hope. The Quintessence pops up and offers the League a chance. A doorway opens to, as the Phantom Stranger puts it, everything. The League is warned that if they go through this door, they will be exposed to every story that has ever existed, even ones they don’t remember. The League runs full speed at the door and they issue ends.

This issue (along with the end of Superior Spider-man) have officially turned me off the big 2’s mainstream titles permanently. It is a never-ending cycle. All they want is money and more money. I began this journey at issue 1 of Scott Snyder’s Justice League. I was expecting to finish the Scott Snyder run at issue 39. Instead I find out that all that money and time I spent thinking I was getting a complete story was wasted. OK, maybe wasted was a strong word to use, but I am royally pissed. I expect some kind of ending at the end of a run… unless somebody gets fired from the book. But that didn’t happen!

Now that all of that’s been said, there were a ton of good points from the books content. First of all, welcome back The Quintessence. The all-powerful magical guardians of the DC universe. An appearance by The Spectre, Ganthet, Highfather, Phantom Stranger and the two others that I can’t remember the name of is always welcome. The all-black costumes (reminiscent of the 2000 X-Men film) actually look very good on the League and I kind of wish they could find a way to keep them. Although the costumes do beg the question of whether they temporarily lost their powers thanks to Perpetua or if it’s more symbolic than anything else.

Luthor is sorry. When I first read the issue, I thought it was his redeeming moment, like it had suddenly hit him what he was doing and switched sides. But to be quite frank, it was him surrendering to the darkness, a broken (yet still powerful man). Instead of a rallying call for humanity, Luthor actually gave up.

Doomsday Clock may or may not matter at this point (I’m pretty sure DC is only using select pieces of lore from it as of now) so we don’t get any more info on the JSA or other Leagues we’ve seen in the run. That’s just another disappointment.

Some of the content was good, but the fact that this was basically a 39 issue maxi-series lowers it to 2.5 stars. Snyder didn’t even try to stick the landing. Instead he bounced the plane off the runway and back into flight. You have not reached your final destination.