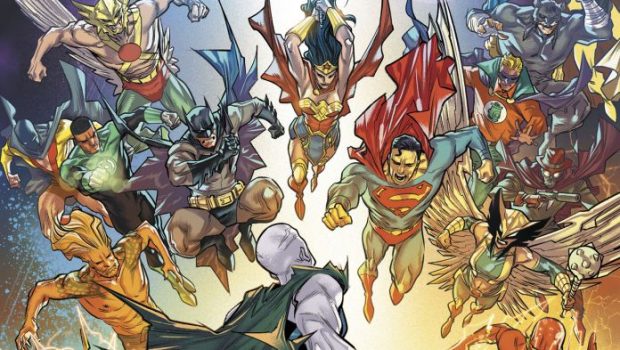 Summary: The final of the war is here. The book has a lot of great moments, but the conflict still doesn't resonate.

The Story: Lex vs everyone.

Summary: The aforementioned heroes square off with Luthor, with him exclaiming that it simply will not matter, they can’t win. Superman replies that they don’t plan on winning. They plan to go down swinging. Meanwhile, Hawkgirl asks Shayne to broadcast their message of hope and the battle to the people of the world. He’s unsure but she tells him he is the best of her and Manhunter: a hero.

John is the first one to go after Lex. He blasts Lex and Luthor responds with EVERY construct John has ever made. He manages to do this by channeling Sinestro’s power through his pod on Perpetua’s throne.

Barry is up next. Barry manages to get some hits in, but Lex channels the Baby Turtle and Grodd and begins to age Barry into an old man. Lex begins to gloat when he stops in mid-sentence. Diana has stabbed Lex in the back. She then proceeds to slice him in half.

Shane is struggling to use all that power, but Ms. Martian coaxes him on. Lex of course, his definitely not dead and heals his body back together. He blasts Wonder Woman as Jarro makes his presence known with a great one-liner which I’ll get to later.

Jarro proceeds to jump on Luthor’s face as a distraction while Batman beats the crap out him. Luthor uses his tongue to her Jarro and this distracts Bruce enough to get caught by the throat. Just as he’s about to kill the bat, he gets super-punched.

Superman has hit Luthor with a punch that hasn’t been held back… and while he’s bleeding from the nose, Lex goes at Superman full force. Hawkgirl rallies the troops as Luthor beats Superman down. He claims that Superman will never know how it feels to be human.

A momentary distraction from the spirit of Manhunter gives Diana, Bruce, and Clark to give him the big trinity punch. The sigil has almost changed towards Justice when Perpetua arrives. Shayne tries to stop Luthor and gets punched away for his trouble.

Hawkgirl tries to fight Luthor, but eh gains the upper hand. Luthor gloats and Hawkgirl asks for her last words. Luthor complies and Hawkgirl forgives Luthor for everything he has done. This stops Luthor in his tracks and gives Shayne the opening he needs to get inside his head.

Shayne and Luthor converse inside his mind as Lex thinks that Shayne is attempting to contact his younger self for help. That’s not Shayne’s plan though. Instead, he reaches out to his father’s mind, which is trapped inside Luthor. Shayne trades spots with him and in the material plane, Shayne’s body starts to shapeshift. The Manhunter From Mars has been reborn.

Well, Snyder delivers in terms of writing and character development. When Hawkgirl calls him Albie, we see Lex stunned. We see Shayne give himself up for the Manhunter to return, although to be honest it happened in a much different way than I thought it would. Ever since Shayne showed up, I knew he wouldn’t last beyond Snyder’s arc, but I thought that HE WAS JON and simply didn’t remember it. Instead, the son sacrificed himself for the father. Jarro’s one-liner is fantastic and Batman swears quite a bit in this issue. The pages are bright and the lines are great.

Now we come to the bad part. Why should I care about any of this. Yes, the one-liner’s are great and everybody get some character growth, but the fact that Perpetua almost destroyed the universe (s) seems hollow. This story simply isn’t making an epic impact on me like it wants to. The fact that we have one issue left and Perpetua is still standing is a problem. There is soooo much to wrap up next issue that I don’t know if we will get a satisfying conclusion to her arc. That and except for the League, the only heroes we see are Batwoman, Ryan Choi, Etrigan, Drake, Vixen and Mera. What happened to the Justice Society? I want more of them darn it!

That being said, Jarro better be a league mainstay or I’m going to be so mad.