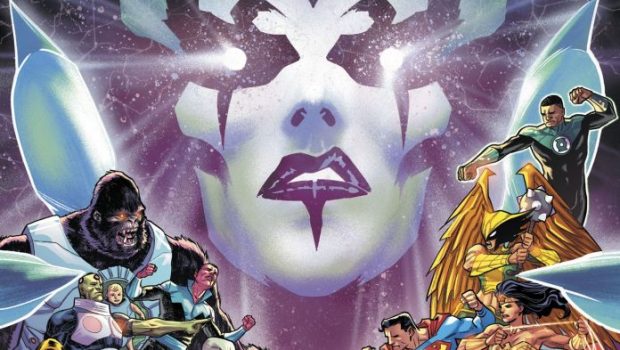 Summary: The heroes band together for the final battle. A voice from the past returns and we see the Flash-mobile.

The Story: The heroes get their second wind. That and of course Batman has a Batman moment.

Summary: The trinity is alone when Diana. Encourages them to pray. When asked which god they should pray to, Diana simply responds “None. We’re praying to something different altogether.”

The Legion of Doom has returned and are congratulated by Perpetua. The Legion wants their rewards for service, but like any good (bad) god, Perpetua betrays them. Brainiac one million is transformed into a throne for Perpetua with 3 pods at its base. For the first time that I can remember, Sinestro and Grodd actually look fearful. Even Lex is confused, but Perpetua then drags the 3 remaining Legion (well, 4 if you count baby Turtle), into the pods. They writhe and scream for help and we see a voice pleading with Luthor to help them. A voice with a green thought box. Hmmm… Anyways, the Legion is now going to used to power Lex forever with the seven dark forces.

Back on Earth, the League, the Society, and the rest of the assembled heroes gather for the final battle. Superman admits that the mistake they made was fighting for people and not encouraging them to fight for themselves.

In space, Hawkgirl and Shayne attempt to get the ship moving but are attacked by a giant Anti-Monitor. Meanwhile John Stewart uses the Flash mobile and Barry and Allan’s power to power a portal to where Hawgirl and Shayne are.

Lex shows up with thousands if not millions of soldiers and a flying hall of Doom. Lex declares victory… but Bruce being Bruce, he has transformed the Hall of Justice into one last ditch weapon: a walking hall of Justice. It’s time for the two command centers to get it on.

Final call: Well, that was fun. I actually really loved this issue. As has been my complaint of numerous issues of this run the page count puts the art at a deficit. The scene where the heroes assembled looked so tiny with just a lot of outlines. If it had a page (or dare I say two) to breathe, the art would have been phenomenal. The same goes for the walking Hall of Justice. Speaking of that, it looks ridiculous, but in the best way possible. It’s like Snyder’s inner child has come out. It does read like fan fiction but isn’t that a majority of comics? OH! John, is back. Sort of. I never thought he was actually dead though. I have a feeling he is finally going to be Lex’s salvation. The stakes still don’t resonate like they should, but it’s a step on the right path.