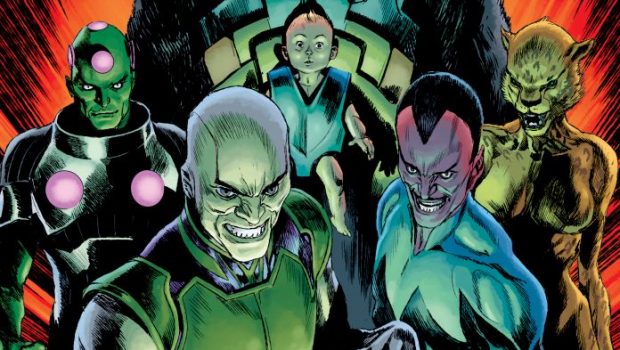 Summary: A universe is destroyed. The heroes mope. Shayne seems to be the only one with hope.

All Hail Doom (not that one)

Summary: Superman tries to figure out what went wrong. Ted Knight informs him that Starman is dead. For some reason, Jarro is ok with this. This turns out to be the case because Will Payton’s vision is coming true. 3 League members have died: Jonn, Arthur, and now Will. Next up comes the “the great disaster” as Kamandi calls it. Batman insists that they have t get Hawkgirl and Shayne back. Bruce says it’s to regroup but Jarro, reminding him that he reads minds, says that what Bruce really wants to do is say goodbye. M’Gann exclaims that the sign of Doom is literally everywhere, including the far reaches of space (The Ghost Sector, OA), and has even crossed multiverses as Earth-3 can see it as well as Barbatos in the dark multiverse. Perpetua then annihilates Earth-19 (Gotham by Gasllight.)

Meanwhile, in space, Kendra mourns her mistake. Her rage clouded her mind and because of that, Luthor won. They try to jump back to earth on their ship with Batman’s help but Perpetua damages their ship and they crash… somewhere. Perpetua then sends Luthor out to finish the league as well as Hawkgirl.

Final call: Well, that certainly was gloomy as can be. The art for the pages of Perpetua destroying Earth-19 and it’s universe is stunning, but again I wish be got a double splash page. I understand the limited page space however so it’s not that upsetting.

The thing that bothers me though is that while we saw Perpetua demolish trillions of lives, it felt hollow. Perhaps it’s because the league didn’t see it, but in my 27 years of reading comics, I’ve certainly seen more hopeless situations then this) or at least have felt more of an emotional pull by them.) When Darkseid won in Final Crisis, I knew they were going to win, but I didn’t know how. When Darkseid won in Rock Of Ages, they didn’twin. Not really. They just barely scraped by. (The fact that those stories both have Darkseid and are by Grant Morrison is irrelevant.) Hell, when Imperiex tried to hollow the universe, I had no idea how they were going to win and the way the heroes did triumph is still one of my all-time favorite endings to a villain ever. Now that Doom has one, it’s just rings untrue.

Snyder still has 4 more issues to give this some real emotional weight. I have faith in my comics that he can do it. Now if you’ll excuse me, I have to go cry over the death of Superior Spider-man.