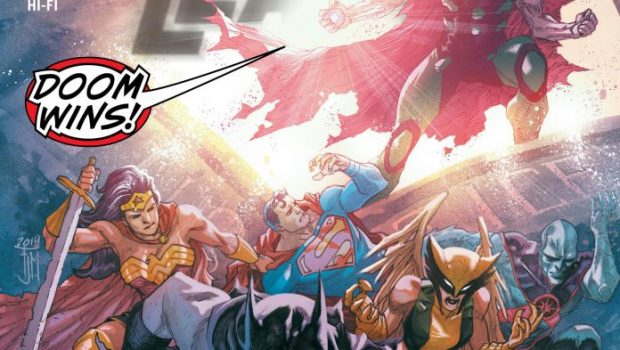 Summary: Hawkgirl learns how powerful rage can be, John Stewart gives one hell of a speech and a TON of heroes arrive.

Story: Cheetah has full control over Poseidon as Grodd and Sinestro are quite flippant, The three of them are greatly enjoying this. Vandal confronts John and the Society and refuses to listen to them. John exclaims that in the future everything ends. But they have a chance if Vandal acts with them today. Vandal concedes and agrees to help them.

We then travel to the future as the League is on the verge of defeat by Brainiac. The we get a visual feast as Kamandi orders everyone to attack. That everyone is a glorious page with the Justice Legion A, the KINGDOM COME league, the Justice League Beyond, Booster Gold, what seems to be the Legion of Superheroes (we clearly see John near the center of the page), an OMAC, and the Justice League of Earth-23. Starman One Million sends out a message across time and space to other Starmen that time is short.

In the present, Hawkgirl refuses to listen and keeps going after Luthor. She just will not stop, even when told the monitor’s need her help to win. Back in the past, Vandal helps assemble the machine that Starman (Ted) needs to spread the message across time. The 3 Starman sync up and are trying to open the portals so that the totality can be restored. They just need a diversion.

Perpetua looks frightened for the first time, Luthor looks like he is about to cry and the League is so close. But Hawkgirl breaks formation yet again to go after Luthor. Because of that, the power she holds from the source wall is exhausted. The Ultra-Monitor is split into 3 again as the world sides with Doom (the totality couldn’t be brought to bear fully). Perpetua apparently kills Starman (Gavyn) and unleashes her full power. The Anti-Monitor switches sides and betrays his brothers. The multiverse is doomed. Victor would so love this right now if he was owned by DC.

Art – Some of these pages that Redondo and Porter make are stunning. The problem is that they really should be double splash pages. Having each character designed in these pages is brilliant but it also looks cluttered. Even the following two pages has the top half covering the battle isn’t enough. I know there is a page limitation but really, give me those pages.

Commentary: I knew that Hawkgirl was going to screw everything up. Ever since Jonn had died, she’s been a damn mess. She gave into rage, which in this story at least, is EVIL! The whole story is just totally up-ended now. We finally have reached the end of the first of three chapters and now it’s time for darkness to reign. Once again, my only nitpick is that the pages seem cluttered.