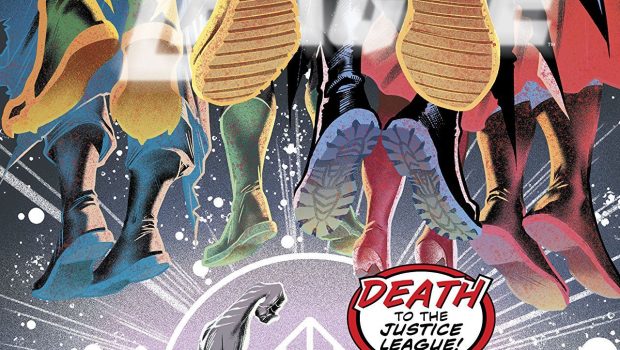 Summary: The Leagues three omniscient members combine to fight their mother and the Society learns of Atlantis. Could Justice win this fight?

Background: As the cover says… “DEATH TO THE JUSTICE LEAGUE!”

Story: Hawkgirl, Starman (Will), and the three monitor brothers attempt to fight Luthor and Perpetua. The 3 brothers join arms and fuse into the ULTRA-MONITOR. The past League/Society team travels to Atlantis to bring the piece of the totality together with the Conch of Arion. Aquaman explains that when he was about to die in “Drowning” the Anti-monitor saved him and explained what needed to be done. The Future League/Legion A struggles to fight off Brainiac One Million when Kamandi suddenly gets an idea and runs off. In the present, the Ultra-Monitor fights Perpetua while Hawkgirl fights Luthor in a rage. The monitors comment how Hawkgirl has the power of the source wall in her wings and it then transfers to her mace. She proceeds to kick Luthor’s tail. The league gets to Atlantis but Sinestro is waiting for them with a plan. A plan that involves using an enslaved Poseidon against them. The Vandal Savage shows up (!) and has a team called Legionnaires Club and orders the League to surrender. The future league is just about beaten, and we end on Kamandi giving a speech to a group of heroes to rally them to his side. The group is the JUSTICE LEAGUE BEYOND!

Art – While I enjoyed Porter’s art, Bruno Redondo and Daniel Sampere have a better grasp on facial expressions. The characters faces don’t always look like their mouths are open all the time. The Ultra-Monitor looks very nice and to be frank, I’d like a statue of that at some point.

Commentary: Why do I have a feeling that Hawkgirl’s rage is going to screw all of this up? Something about her character is just not sitting right with me at the moment. She’s ignoring everything else to go after Luthor and that can’t be a good thing. As I said early, the Ultra-Monitor looks very cool… but it also reads like bad fanfiction. Snyder’s run on Justice League has had a lot of homages to DBZ (Superman punching World Forger to name one) and now the three monitors have basically done the fusion dance. This issue has a nice call out to the name Arion. For those who don’t known, Arion was a pre-crisis sorcerer who first appeared in the comic Warlord in 1982. The cover did not lie, the League and Society were definitely on the ropes this issue. Two weeks is too long sometimes.