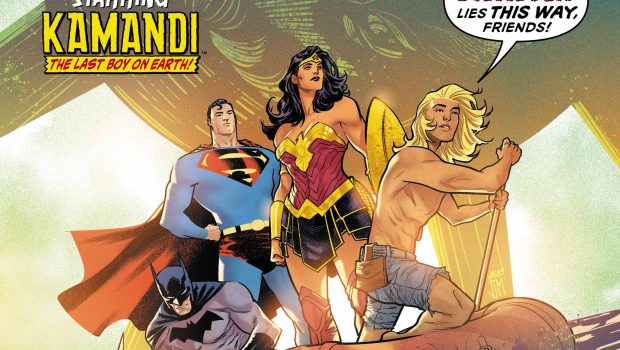 Background: The leagues battles rage on.

Story: The league has been split up into three different time periods. Luthor converses with his legion of Doom. Cheetah brings up the point that time has already been altered and she’s worried that they could further damage the time stream, while also questioning how the league doesn’t know about the JSA. Luthor tells her that Perpetua controls Hypertime and not to worry. Perpetua meanwhile holds out hope that her son the Anti-Monitor will accept his true nature and join them. The League battles the Legion at Pearl Harbor and the Japanese pilots that Sinestro has controlled through the ultraviolet spectrum. The team locates the piece of power that Starman uses and go after it. In the future, the League manages to fight off a Brainiac controlled Justice Legion A and Hourman frees the Worlog from his body. Brainiac then goes and upgrades himself into a gigantic Brainiac One Million Form. Back in the past, the League is on the ropes against the Legion and just when all seems lost, a giant Octopus saves the day, taking out the Legion of Doom. Where did it come from… why AQUAMAN OF COURSE! HE’S BACK! The issue ends as the Anti-Monitor declares war on mommy.

Art – I like Porter’s art. His pencils aren’t to hard and he gives a great depth of detail on every page. His Justice Legion A looks great especially his Superman One Million. That guy has never looked so strong.

Commentary: Oh, there is so much to talk about in this issue. The Justice Legion A makes more than a cameo in this issue and I couldn’t be happier. Morrison’s JLA was the first Justice League run I ever read back to front and it’s obvious Snyder is paying more than lip service to him here. The Worlog is back! Who doesn’t love a good old McGuffin from a previous era returning (although I doubt it will play too big of a role here.) Barry and Jay are convinced that they’ve worked together before, but neither can remember when. This just gives me more evidence that Doomsday Clock will put the years back in place that Manhattan stole but something else is going to have to kickstart everybody’s memories. While I think Brainiac One Million looks impressive, I do wish that they could’ve given this a two-page splash to look even more visually impressive.

Watching the octopus take out Grodd, Turtle, Sinestro and Cheetah was awesome and hilarious at the same time, and watching the Leagues faces as they realize what this must mean was great. Aquaman is back! The Anti-Monitor fighting against Perpetua was also nice but expected.

Rating – It’s crazy that this thing is still pretty much in it’s first act. But we are getting close to the second. 4 out of 5 stars.