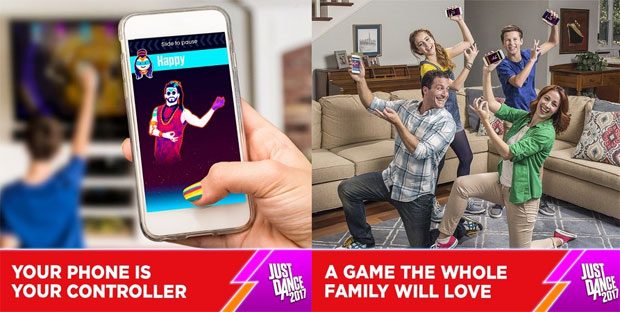 Sydney, Australia — March 6, 2017 — Just Dance® 2017 is now available on Nintendo Switch™, the first Ubisoft® game released for Nintendo Switch at launch. The chart-topping dance track, “How Deep Is Your Love” by Calvin Harris & Disciples, will be available as an exclusive track for Nintendo Switch owners via Just Dance Unlimited.* This hit song joins 40 tracks already available in the game, including “Sorry” by Justin Bieber, “Lean On” by Major Lazer Ft. MØ & DJ Snake, brand-new hits like “Don’t Wanna Know” by Maroon 5, party favourites like “Single Ladies (Put a Ring on It)” by Beyoncé and classics like “Don’t Stop Me Now” by Queen.

Nintendo Switch players will also have three months of free access to Just Dance Unlimited, the dance-on-demand subscription streaming service, which offers more than 200 additional songs and access to exclusive tracks, with new hit songs added all the time.

More accessible than ever, Just Dance 2017 can now be played anywhere, with up to six players at the same time using a Joy-Con™ controller or by using the Just Dance Controller app (which turns your smartphone into a controller).

* “How Deep is Your Love” from Calvin Harris & Disciples is available through Just Dance Unlimited and can be accessed either via the free trial or subscribing.