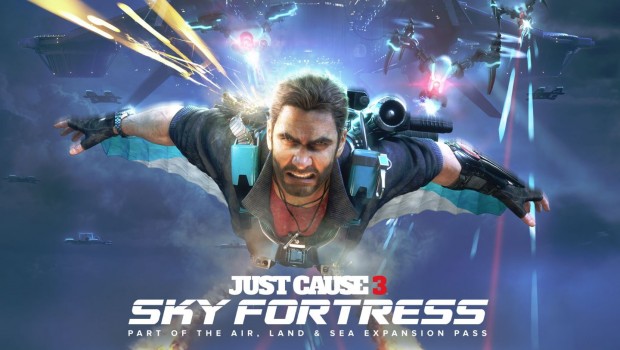 SYDNEY, 16TH March 2016 – JUST CAUSE 3: SKY FORTRESS, the first content pack from the Air, Land and Sea Expansion Pass which was previously only available to pass holders – is now on general sale for all players.

SKY FORTRESS contains a brand new set of missions that introduce a new threat – the eDEN Corporation and their huge and terrifying Sky Fortress, with its army of deadly robotic drones. To tackle his deadly new adversary, Rico Rodriguez will use a new upgradeable, rocket-powered, weaponised ‘Bavarium Wingsuit’ fitted with shoulder mounted machine guns and auto targeting missiles – alongside his new ‘Eviction’ personal defence drone and ‘Bavarium Splitter’ assault rifle.

“The new content will fundamentally alter how our players approach the game – we’re really looking forward to seeing how fans adapt to the new Wingsuit,” said Tobias Andersson, Senior Producer at Avalanche Studios. “The new story missions, challenges and gadgets that can be taken into the main game really mix things up, and we can’t wait for players to revisit Medici and start getting even more creative”.

The SKY FORTRESS pack is priced at $17.95 whilst the AIR, LAND & SEA Expansion Pass is available for $37.95. All three content packs will be available before the end of summer 2016 and released one week early to Expansion Pass holders.