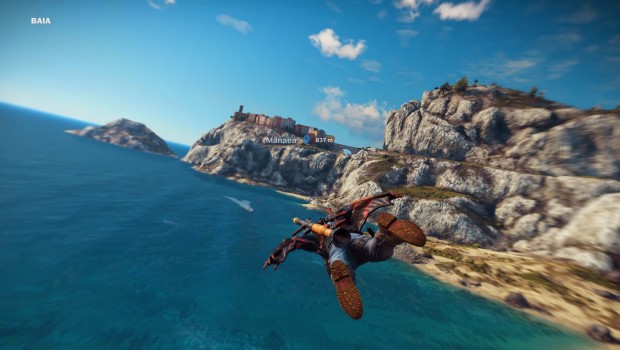 Summary: Just Cause 3 is over-the-top, dumb fun, and incredibly beautiful to boot—when it all eventually loads, of course.

Just Cause 3 is about fun. The islands of Medici are a destructible playground for the player, full of neat challenges to complete and utter chaos to wreak. But one thing hampers this more than any other aspect: the load times. I have a lot of positive things to say about Just Cause 3, but the time I wasted waiting in loading screens is not one of them. My record wait time was 67 seconds—this came after I attempted to restart a race, seemingly a simple task. The average wait time is somewhere in the vicinity of 25 seconds.

I understand that a massive environment puts strain on hardware, but there are so many load screens—before and after cutscenes, of which there are many; when restarting challenges; when fast-travelling; after death; between the extremely frustrating attempts to log-in to the online mode that is totally unnecessary—that the wait time adds up. It wouldn’t surprise me if I’ve spent over an hour of my life staring at Just Cause 3 loading bars. 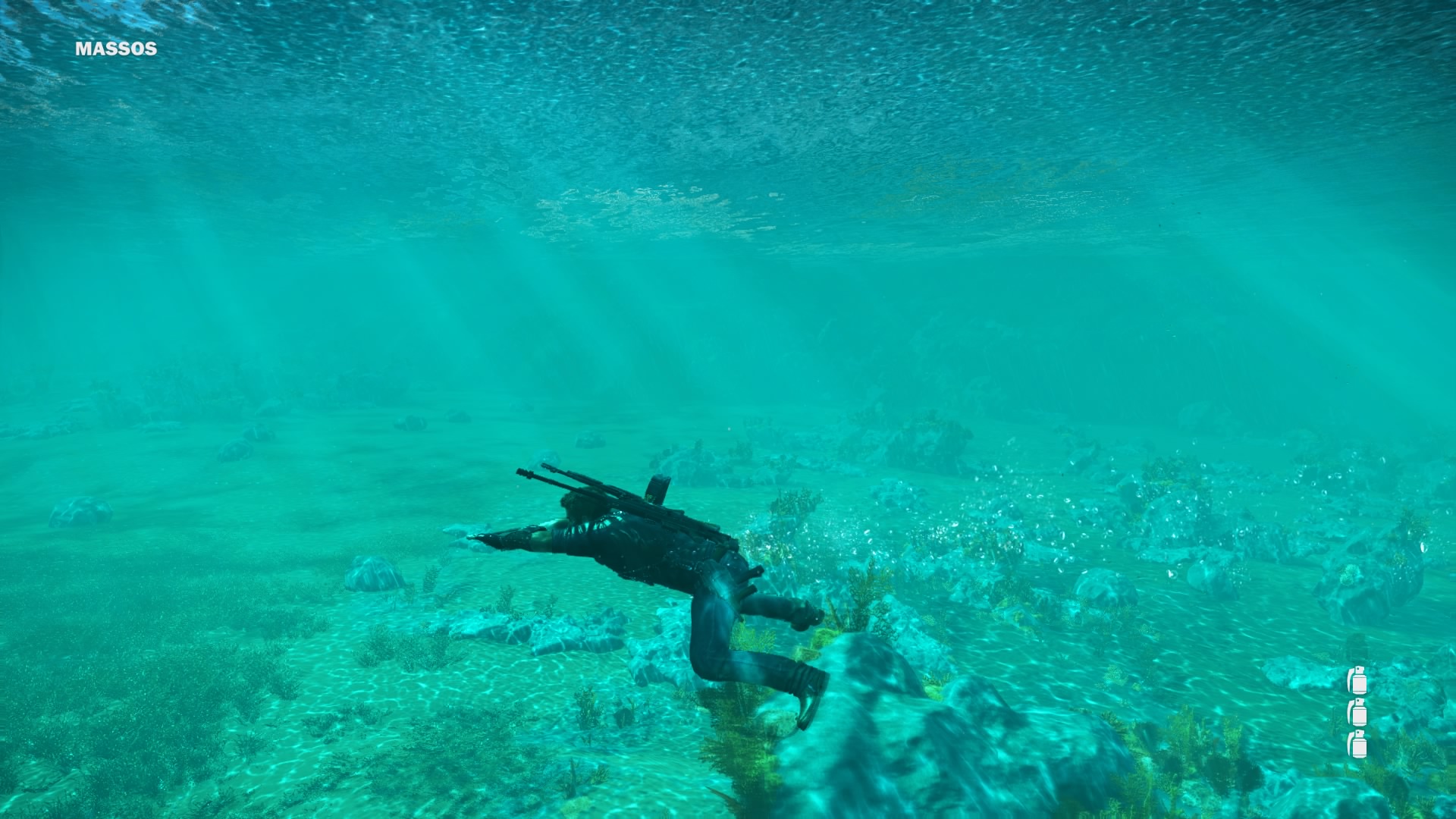 Fortunately, there are no loading screens while traversing through the wonderful islands of Medici (assuming your online session doesn’t time out, but enough about that). Floating over the crystal blue waters by parachute or soaring through trees in a wingsuit, it’s almost tranquil enough to make you forget that Medici is under the ruthless grip of a corrupt military dictator with an endless army of indistinguishable goons.

Up close, the settlements aren’t terribly interesting—samey buildings that never change, even while being shot up or bombed—but this serves only to encourage players to spend more time in the great outdoors, a wonderland of mostly-untouched landscapes. I cannot overstate how satisfying it is to move (so effortlessly) through stunning natural locales. 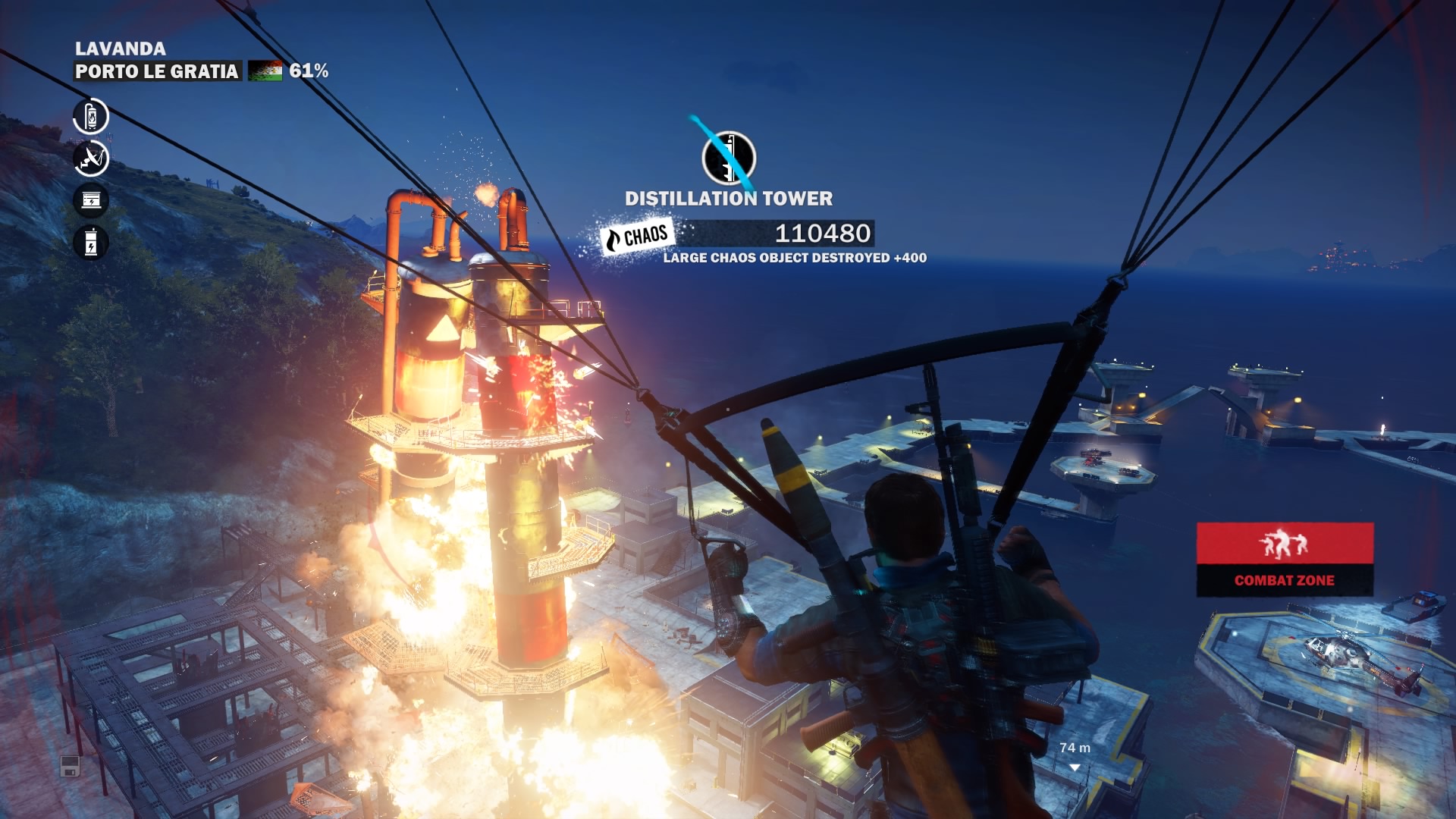 Complementary to this is the satisfaction of absolutely going to town on military bases. Full of destructible chaos objects, tearing through a military base with guns ablaze and grenades a-sploding is a special kind of cathartic. Plenty of changes have gone into making this easier: C4 is unlimited in supply; rebel drops allow free weapon and vehicle resupply wherever you are; and upgrades to the tethering system mean that protagonist Rico Rodriguez’s grappling hook can be even more effective in causing elaborate demolitions.

One of my favourite things to do is attach three or four tethers between the outstretched hand and smug face of antagonist General Di Ravello’s statues in various settlements. When each end starts retracting towards the other, the stone Di Ravello generally ends up ripping off his own head before pulling his arm off. That, or attaching the statue to attacking helicopters; two birds, one problem. 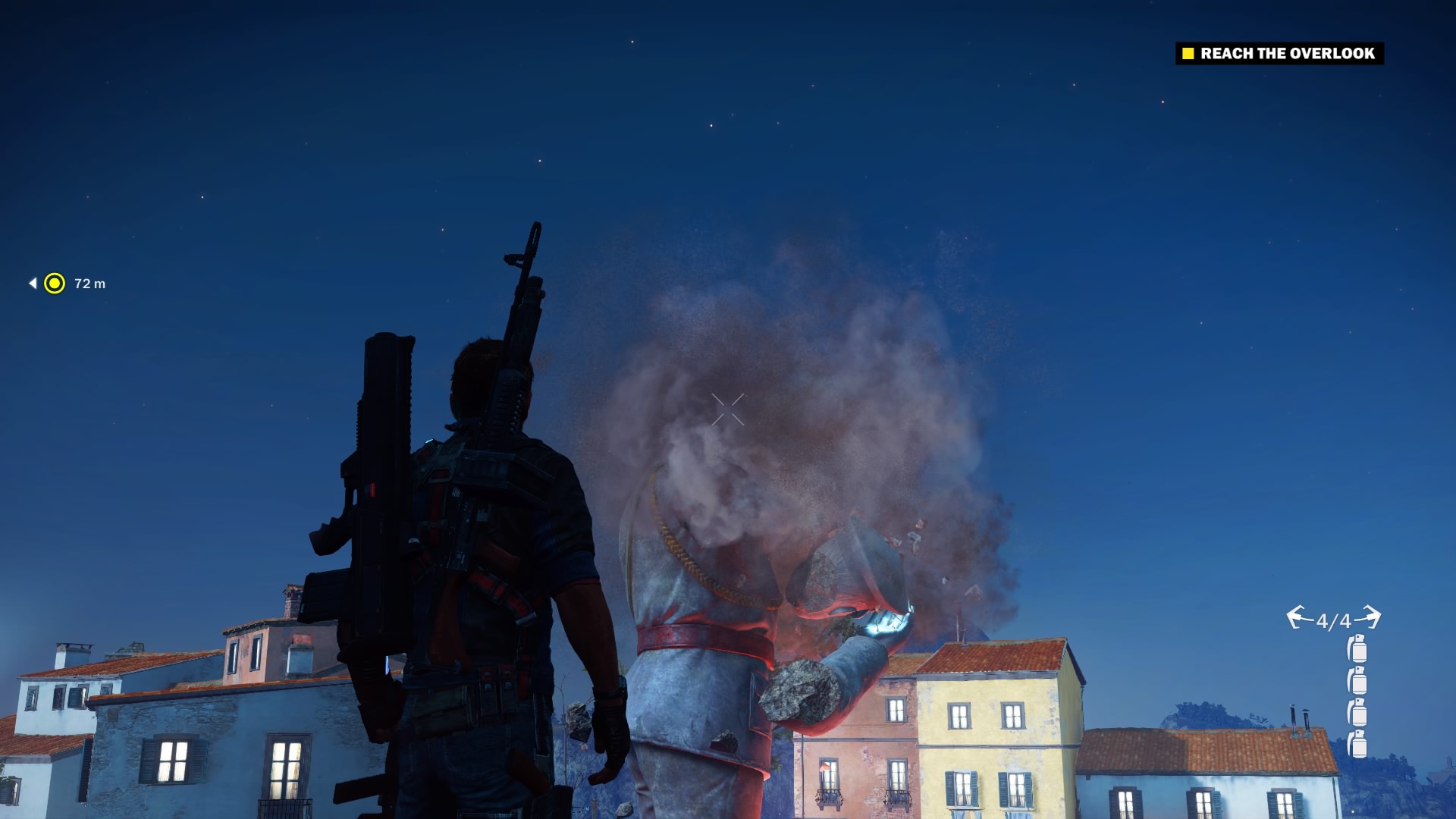 As a counterpoint to how focused the action is, the narrative wobbles along on clichés and spy tropes. The events aren’t terribly inventive or surprising; the premise is effectively identical to that of Just Cause 2, except Medici is Rico’s home. But even if the plot isn’t that clever, what really surprised me is how genuinely entertaining the writing is; the characters are genuinely entertaining and spout often-clever action-movie-esque one-liners, further creating a sense of almost-parody.

Even cruel Di Ravello—whose ruthless acts seem to imply he’s meant to be taken seriously—comes across as more ineffective, exaggerated jerk than a legitimate threat. Like the burning of ‘cowboy’ Tom Sheldon’s signature cowboy hat: it was clearly meant to show that Di Ravello has no limits, even with his associates, but I was in hysterics as it happened.

But the best part, in my heavily biased opinion, is David Tennant as the voice of the propaganda minister. After blowing up military structures, Tennant—presumably playing himself, kidnapped while on holiday—is forced to make government-sponsored announcements about how x military base was blown up to make way for a water park, and so on. Tennant is wonderful and his reports are perfect incentive to continue decimating every base you find. 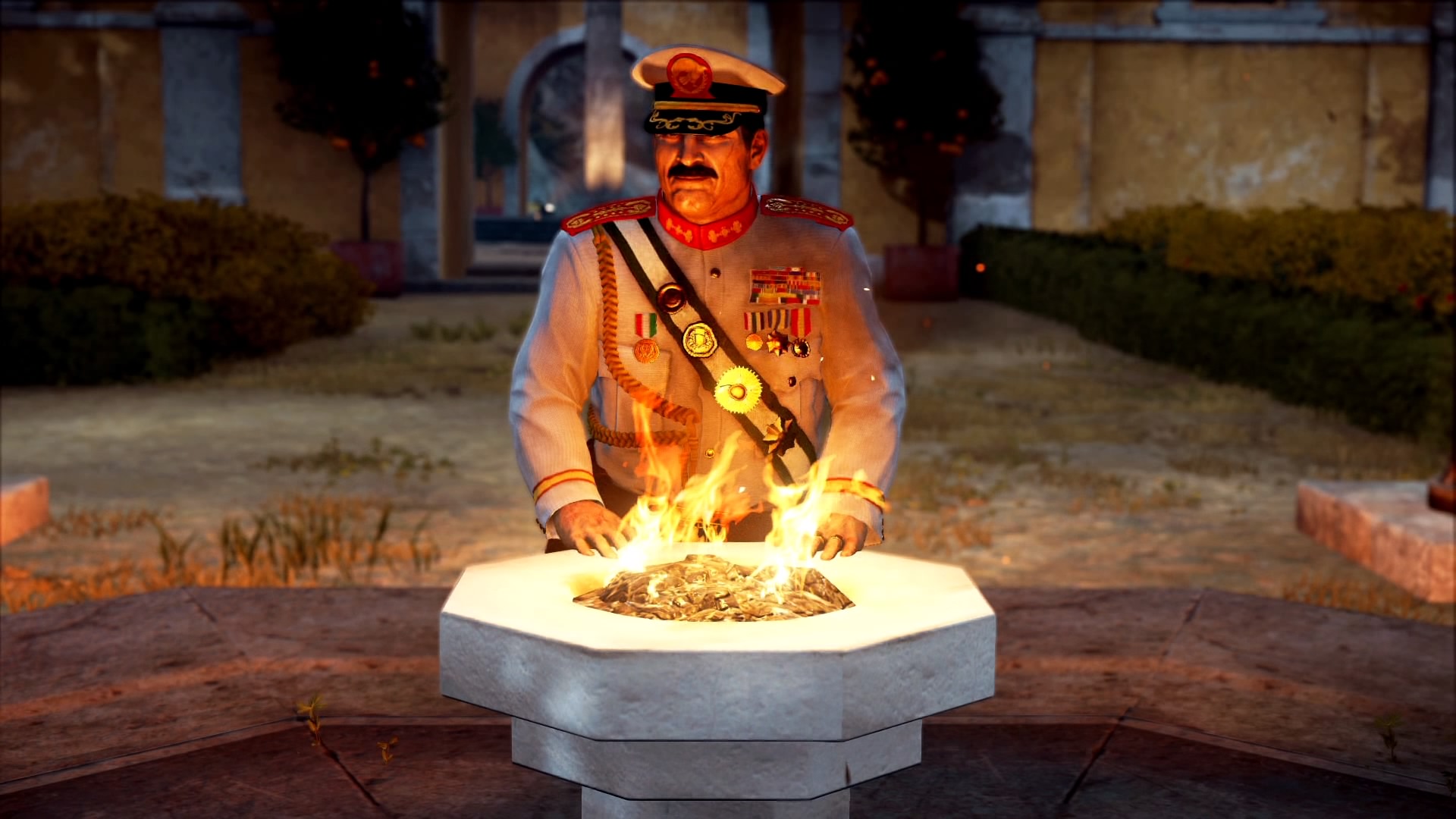 There are plenty of problematic elements when you look closely. One of the first interactions Rico has when he returns to Medici is with his childhood friend and member of the rebellion, Mario Frigo, who says that whatever Rico destroys, the people will rebuild. There’s this bizarre sense that any collateral damage is acceptable—use civilians as inadvertent human shields, or mow them down with weapon or vehicle without a care.

Spam missile fire from your helicopter into a city before diving out and letting the machine smash down into the street and explode. Because the buildings don’t receive damage, it’s almost as if this destruction is negligible, but the human cost of these actions is undeniable. This is, perhaps, why most of Medici is wide open spaces—the fewer opportunities for murder, the more justifiable Rico’s and the rebels’ actions are. 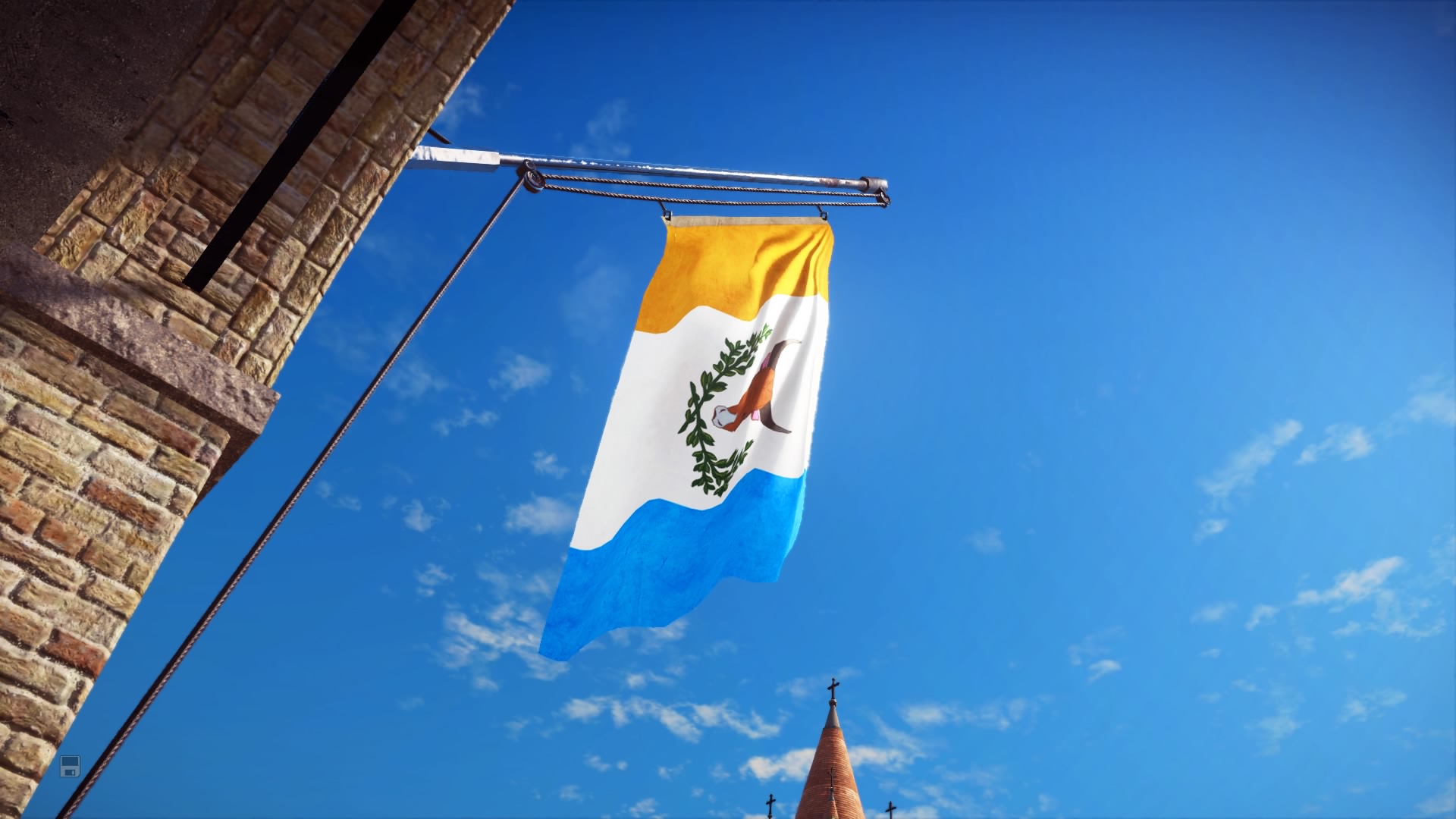 Because at the end of the day, and end of the game, it’s really hard to say that Rico Rodriguez—a man who tore down infrastructure, mass-murdered military forces (many of whom are likely equally oppressed under Di Ravello’s rule, and who are just following orders), left countless dead or injured civilians in his wake, stole vehicles, and otherwise committed gross acts of terrorism—is a hero.

Toppling a corrupt, violent, and oppressive dictator is clearly the right goal, but the manner in which it’s done is very questionable. But then, that’s why it’s called Just Cause, right? The ends justify the means, in this game at least. It’s still weird and unsettling though; Medici is Rico’s home, and many citizens recognise him on the street, so any one of those people he’s robbed or killed could have been friends or family. Troubling stuff. In any case, I suppose I had best get back to tearing down satellite dishes by dropping C4 as I glide past with my parachute.