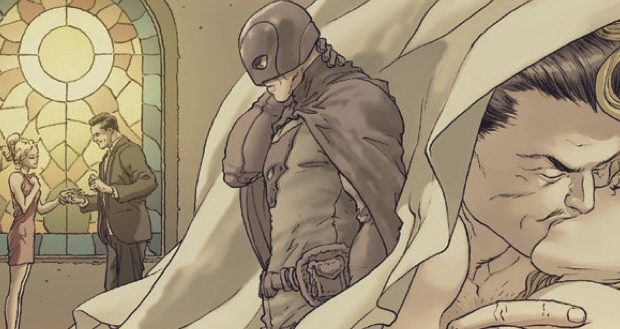 Summary: A slower paced issue that explores an interesting and complex relationship.

The plot thickens as our super-villain family attempt to recruit Hutch’s father, the infamous and ever-dashing Skyfox. The only problem with this plan is how do you recruit and convince a man to fight for your cause who has given up on everything? 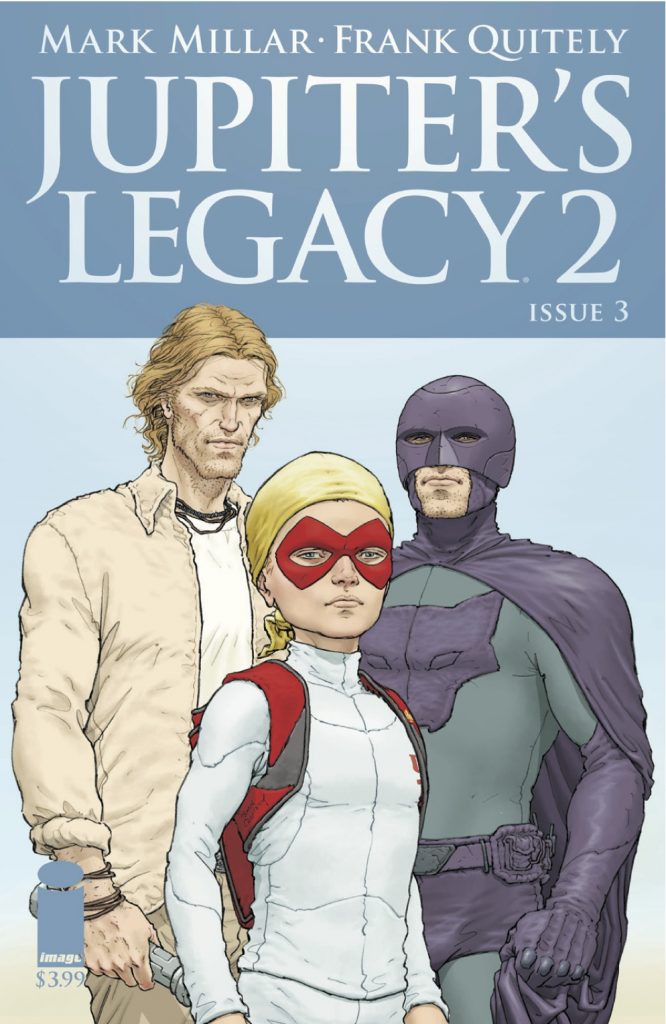 This issue begins in Northern Russia, as Chloe, Hutch and Jason search for the whereabouts of the infamous Skyfox. The mood is tense, as this is one highly anticipated reunion between father and son. Skyfox seems arrogant and cavalier when seeing his son, Hutch, for the first time in decades. You could cut the air with a knife, with the weird and awkward tension that there is between them and he comes across incredibly dismissive as he would much rather focus on old footage of himself, rather than acknowledge his own son. What a jerk! Without giving too much away, let’s just say that things don’t go to plan and our band of super-villains are forced to brainstorm a new plan to break into Supermax. Of course though, there is a twist and we are left with a satisfying conclusion as to what plan of attack that they are going to take. 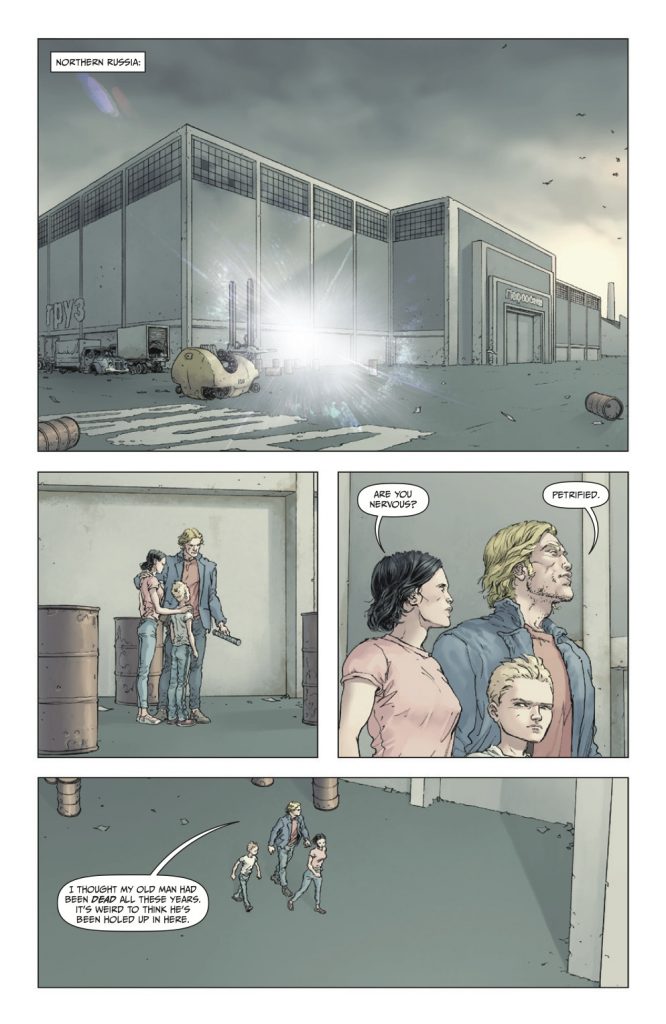 This is a slower paced issue than the previous one as Mark Millar establishes the relationship between Skyfox and Hutch. Even though they are father and son, they essentially do not know each other, as Skyfox was absent for most of Hutch’s life. Naturally, there is a lot of guilt there with Skyfox and Millar does a great job at creating an awkward and uneasy tone with their reunion. Over the years Skyfox has become a hardened and embittered man. His past has really shaped him in a negative way and to put it bluntly, he doesn’t give a damn! It takes Jason, his grandson, to reignite those feelings, all of which really agitates him in the process. This leads to some interesting and rather entertaining dialogue between these two.

Throughout this whole series so far, I’ve found that Skyfox is my favourite character. Yes, he’s vain, selfish and incredibly abrasive but he’s also intelligent, funny and engaging. We’ve seen his past and experienced some pretty heavy things with him, which have all shaped him into the man he is now. He adds that much needed embittered dark side to the story. He has been wronged by those that he trusted the most and he wants vengeance. This is going to be a sweet story of retribution. I just know it! 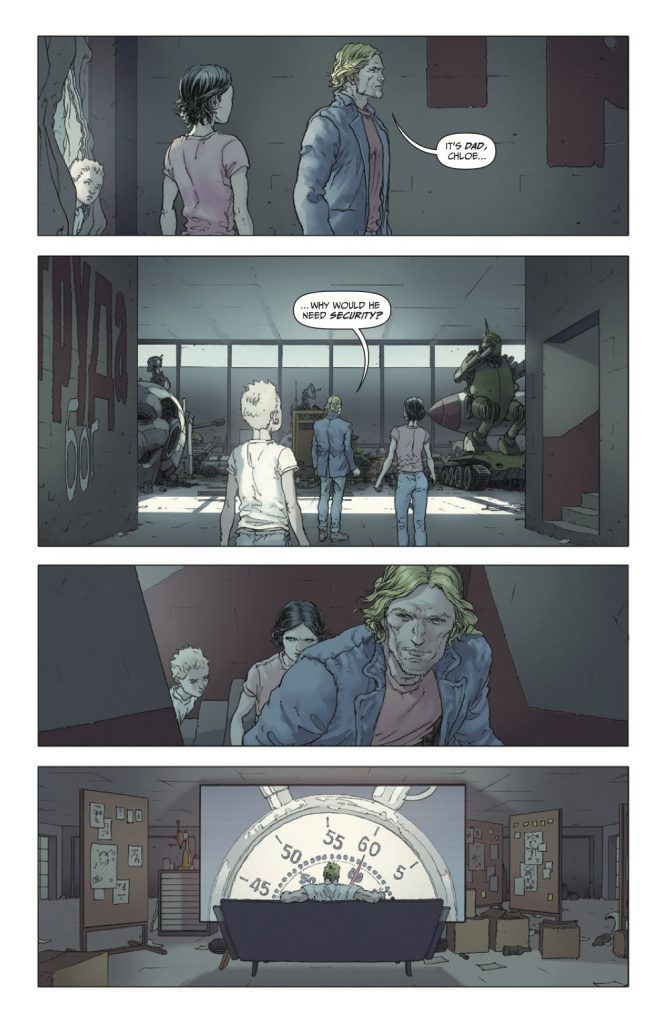 The art is just lovely and of course it is, it’s Frank Quitely! Unique, beautiful and very real, his art really brings a living element to each character in their own unique way. Visually, they all have their own individual personality and the gritty realness to the way that they are drawn really heightens this aspect. Quitely effectively conveys a strong sense of emotion in his art and this is clearly evident when looking at their faces. You can clearly see how they feel and what emotions they are experiencing and it all feels very real and organic. Sunny Gho’s colouring once again works to reinforce the overall tonal mood of each scene. His colouring creates a sense of bleakness in Northern Russia with dull and muted colours and a sense of hope and anticipation during the scenes in Africa with the use of more vibrant colours. I also thought his use of a sepia-like tone during the flashback scenes was effective. It really helped to establish those scenes as clear memories and so that we knew we were seeing them in retrospect. 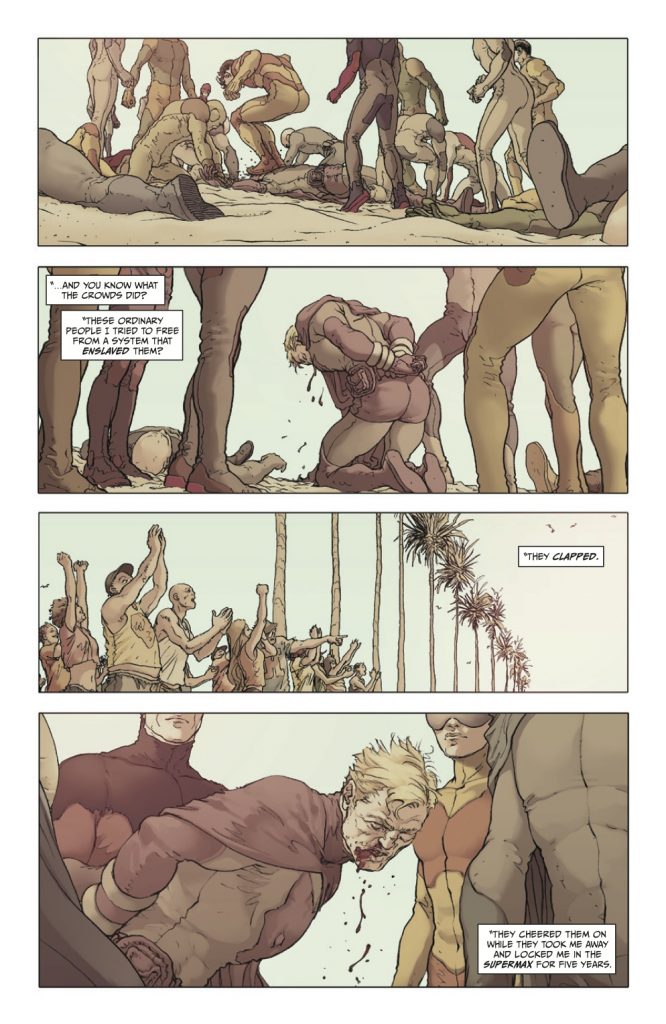 Although this issue was slower paced and didn’t progress a great deal, the deliberate gradual pace was needed to help establish these new and complex relationships. Overall I’m really enjoying the character development and the interesting relationship dynamics that are forming. I’m looking forward to when the next issue comes out and we get to see more of the super-villain’s plan to break into Supermax. Millar is laying the foundations for an all mighty raid and I can’t wait to see how it’s all going to unfold.