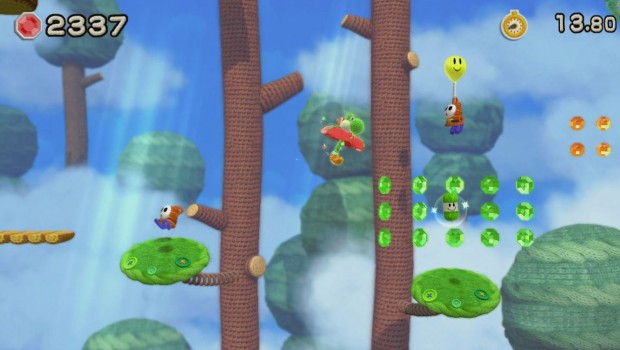 14th May 2015 – A beautifully-rendered world made from wool awaits Yoshi fans on 25th June, when the latest game in the Yoshi platform series, Yoshi’s Woolly World releases exclusively on Wii U – 2 days earlier than the previously announced date of 27th June. Rendered in a woolly art style so intricate it looks hand-made, prepare to head to Craft Island and discover – at your own pace – over 50 beautifully “knitted” levels full of surprises and hidden collectibles.

In accompaniment to this yarn-inspired adventure, a Yarn Yoshi amiibo – available in Green, Pink or Light-Blue, and made from knitted material – will also be released on the same day (SRP AU$24.95 each). When touching a Yarn Yoshi amiibo to the Wii U GamePad, you can play solo with Double Yoshi – two Yoshis on screen. A bundle comprising a copy of the game and a Green Yarn Yoshi amiibo will also be available for purchase from launch for only SRP AU$89.95! (Suggested retail price of stand-alone game is AU$79.95).

Once upon a time in Craft Island, a paradise located in the middle of Handmade Ocean, the peaceful lives of different-patterned Yoshis are rudely disrupted by the dastardly Kamek, who has kidnapped Yoshis by turning them into balls of yarn using his magic. Having escaped the surprise attack by this notorious villain, Yoshi must set out on an adventure spanning various Worlds, with beautiful landscapes ranging from lush woolly meadows to fluffy mountain peaks. And at the end of it all…well, Yoshi might encounter an even fiercer villain behind this pesky plot…

On this journey of discovery, Yoshi must Ground Pound, Flutter Jump, and gobble up woolly enemies, which can be turned into Yarn Balls – both big and small – to lob at obstacles and other enemies standing in Yoshi’s way. As a classic staple in the Yoshi platform series, Yoshi can also transform in certain levels, so don’t be surprised to encounter a fast-swimming Mermaid Yoshi, a quick-firing Sky Pop Yoshi aeroplane, and even a Moto Yoshi, where Yoshi turns into a high-speed motorbike.

But while Yoshi’s adventures will be action-packed, there is no time limit to finish each level, and if a level is getting particularly tough, you can switch the game to Mellow Mode at any point and play as Winged Yoshi. With the power of flight, Yoshi will find the action a little easier to manage! In addition, and in the spirit of two Yoshis being better than one, a co-operative feature allows one of your friends to join the platforming fun as a second Yoshi and play the entire adventure alongside you.

Keep a keen eye out for cool collectibles in Yoshi’s Woolly World, with Hearts to restore Yoshi’s life gauge, Stamp Patches that unlock stamps for Miiverse, and Smiley Flowers to increase the chances of unlocking a bonus game. Be sure to collect a horde of Beads, as these can be saved up to purchase Power Badges between levels, which when activated allow – for example – Yoshi to unleash powered-up Ground Pounds, or even be able to play alongside woolly canine companion Poochy. Meanwhile, for the full yarn-themed experience make a particular effort to hunt down Wonder Wools, as by finding all five in every level, watch as one of more than 50 uniquely-patterned Yoshis revives in front of your eyes! Best of all, you can then visit Yoshi Hut on Craft Island and choose to play as one of these many different-patterned Yoshis during your adventures.

Uncover a lovingly-crafted world of woolly wonders on 25th June when Yoshi’s Woolly World launches on Wii U, in stores as well as on Nintendo eShop.