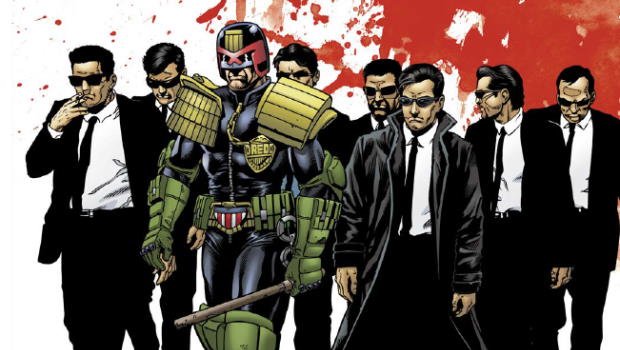 Summary: A handful of stories showing Dredd's tough side and his.... other, tough side.

Dredd is a force to be reckoned with, which is both good and bad. It’s good if you want criminals to think twice about doing the wrong thing because Dredd might track them down… it’s bad if you don’t want any collateral damages. In Judge Dredd: Case Files 38 we see Dredd hunting down a perp in the remains of Cincinnati, we see him trying to recover colleagues from the “Sovs” and we even get to see Dredd “work with” People’s Justice Ministry Inspector Liu Chan Yeun. Along with some more routine local law enforcement engagements.

Dredd is an interesting character for a number of reasons, obviously his conviction that things are black and white… if you’ve done a crime you will do the time (or be otherwise punished) for it but also for his history and the fact that he does have a family… of sorts. This collection features Dredd delivering a line that is quite telling about the man and just what he thinks is reasonable in his pursuit of “justice”… in the story Shakedown Judge Dredd calls into a building “This is Judge Dredd! You know me — I hate law breakers! I don’t care if I have to take out a few innocent citizens just to get them! So you got one chance to come out intact!” Now whether he was just saying that to be intimidating or if he was serious we may not know… but it is pretty telling of how serious a character he is. That seriousness is contrasted in a later story in which Dredd is forced to work with a fellow Judge who he feels is a disgrace to the profession… but what we see from the story is certainly a different approach to the job, but arguably one with more compassion and decency, yet even seeing how effective that Judge can be and being helped by him, Dredd cannot budge on his view that the guy is a disgrace.

There’s a pretty varied bunch of styles here and I’m not mad on all of it. I quite like the Reservoir Dogs Style cover art, but the first story Meat Monger is stylised in a way that doesn’t sit well with me. I know Dredd’s chin is a big feature of the character but here he looks like he could puncture a tyre with the point of his chin. But then we get a more painterly look in Master of Fear and colour tones that remind me of the first Dredd comics that I read (so perhaps there’s just a touch of nostalgia at play there.)

There’s a good bit of variety here, some really interesting stories and some light hearted pieces as well. It’s interesting to read about Dredd’s “family” of sorts and to see the inevitability of him as a character. He’s still a complicated character… on the one hand we see that the world is full of lawlessness but then we also see that Dredd isn’t afraid of putting the so called innocent citizens at risk if it means he can stop one perp… so where do you draw the line between upholding the law and protecting the citizens and breaking the law and endangering the citizens. Some interesting reading that’s for sure.