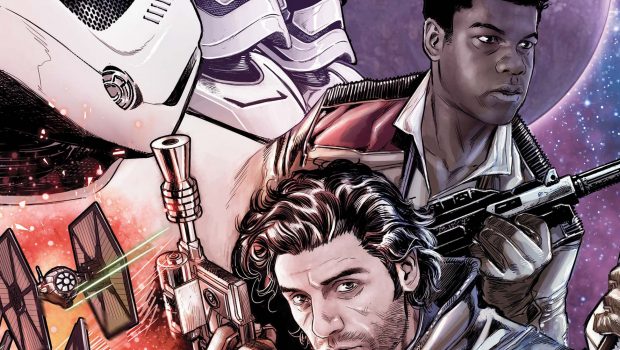 Summary: A nice little potboiler story on the way to the big show.

Star Wars comics have a long history and I have seen some of the trade paperbacks in the library but have not had the chance to read any of them as yet. This story is set in the lead up to Rise of the Skywalker and a lot has taken place since the events of the Last Jedi.

Rey, Leia, Rose and Chewie have been arrested on the Mon Calamari home world for getting in a brawl and on the other side of the galaxy Finn and Poe are cornered by bounty hunters.

There is a lot going on in the story for such small volume and I felt like I wanted to go back and read the previous issues and keep buying new ones which is always a good thing for a comic book series.

Nice artwork in the different scenes and all the main characters are recognisable.

I had to laugh that Rey is the one who is acting aggressive in this story and not Chewie for a change. The reason the characters are in that particular situation is mentioned briefly, but it does not really matter that much in terms of the story.

The story reminded me of some of the extended universe novels I have read, in that there is a lot more going on behind the scenes than they can show in the movies. Flying around in spaceships seems to happen a lot less you would think. I have been following some of the Star Wars lore channels on Youtube and look forward to what they make of this story

If you are just interested in the movies then what happens in the story probably won’t interest you, but if you want some more Star Wars to tide you over then I would recommend it.