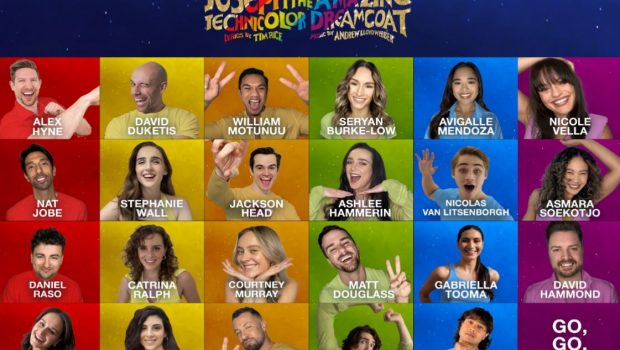 Joseph and The Amazing Technicolor Dreamcoat

Ahead of rehearsals commencing next month, Tim Lawson in association with Michael Harrison and The Really Useful Group are delighted to announce the adult ensemble cast for the Melbourne and Sydney seasons of Joseph and The Amazing Technicolor Dreamcoat. Performances commence 13 November at the Regent Theatre, Melbourne and 11 February at the Capitol Theatre, Sydney.
Joining Euan Fistrovic Doidge (Joseph) and Paulini (The Narrator) will be Seryan Burke-Low,

Tim Lawson said, “We are so proud to introduce our enormously talented cast who will bring to life this magical, newly imagined production of Joseph and the Amazing Technicolor Dreamcoat on our Melbourne and Sydney stages. The creative team were thrilled by the level of talent of each and every member of this company, and I know the chemistry that will be created on stage will be electric.

Our cast of children will be announced shortly, and together with this wonderful group of performers, this show is guaranteed to be a joyous experience for our audiences.” After two triumphant seasons at The London Palladium, this brand new production of Tim Rice and Andrew Lloyd Webber’s sensational show will come direct to Australia with Melbourne’s opening to be the first staging of this newly reimagined production outside of the UK.

Released as a concept album in 1969, the stage version of Joseph and the Amazing Technicolor Dreamcoat has become one of the world’s most beloved family musicals. The show features songs that have gone on to become pop and musical theatre classics, including Any Dream Will Do, Close Every Door to Me, Jacob and Sons, There’s One More Angel In Heaven and Go Go Go Joseph.
Told entirely through song with the help of The Narrator, Joseph and the Amazing Technicolor Dreamcoat follows the story of Jacob’s favourite son Joseph and his eleven brothers. After being sold into slavery by the brothers, he ingratiates himself with Egyptian noble Potiphar, but ends up in jail after refusing the advances of Potiphar’s wife. While imprisoned, Joseph discovers his ability to interpret dreams, and he soon finds himself in front of the mighty but troubled showman, the Pharaoh.