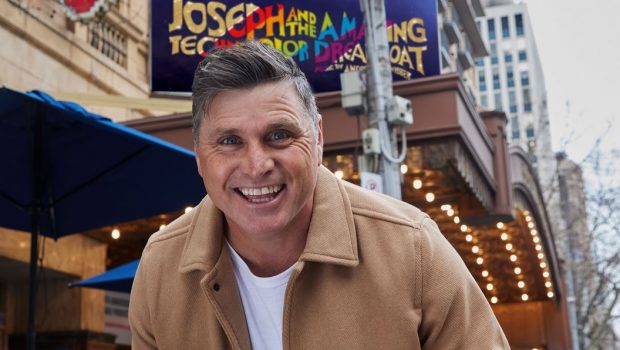 Joseph and the Amazing Technicolor Dreamcoat

Tim Lawson in association with Michael Harrison and The Really Useful Group are thrilled to announce that AFL legend, SHANE CRAWFORD will star exclusively as the Pharaoh, in this dazzling new production of Tim Rice and Andrew Lloyd Webber’s Joseph and the Amazing Technicolor Dreamcoat, for the strictly limited Melbourne season.

Shane will join an all-star Australian cast that includes Euan Fistrovic Doidge (Kinky Boots, Priscilla Queen of the Desert) as Joseph, and Paulini (The Bodyguard, Australian Idol) as The Narrator. Enjoyed by over 30 million people worldwide, this reimagined, feel-good musical is sure to enchant new audiences and longstanding fans alike.

Shane Crawford has a truly diverse and remarkable career which includes his decorated AFL career, his wide-ranging television background, as an author and for his work as an ambassador for Breast Cancer Network Australia.

This will be Shane’s first role in a major theatre production, adding to an already impressive career.

Shane Crawford said “To be offered an opportunity like this is amazing. I have done so many different things in my sporting and media career, but I have never performed in a musical, and I can’t wait! To be given the chance to be on stage, working with so many talented performers, entertaining an audience will be a huge buzz. Playing the role of the Pharaoh in this new production of Joseph and the Amazing Technicolor Dreamcoat is going to be fun – and a little daunting. Bring on the rehearsals!”

Shane Crawford is one of the AFL’s most marketable players, with a successful 16-year career at Hawthorn Football Club, he is one of the few players who has made a seamless transition into life in the media.

Shane played 305 career AFL games for the Hawthorn Football Club. He was a member of Hawthorn’s 2008 Premiership side. He is a four-time All Australian player and played in three International Rules series for Australia. He became captain of Hawthorn in 1999 and that season also won the AFL’s top individual honours, the Brownlow Medal and the Leigh Matthews Trophy. He also won four Hawthorn Best & Fairest Awards (1998, 1999, 2002, 2003).

The charismatic premiership player has demonstrated a range of talent that has won him many fans, with his quick wit, empathy with a wide audience, and natural ease on camera.

Having had a long association with Channel Nine as a key member of the Footy Show, Shane has been a presenter on the Today Show, Sport Sunday and Postcards. In addition, Shane joined j the fifth season of Australian Ninja Warrior 2021 sharing the hosting and sideline commentary duties.

In 2010, Shane released his autobiography That’s What I’m Talking About and in 2014 he published a series of children’s books, Crawf’s Kick it to Nick.

In 2019, Shane appeared in I’m A Celebrity, Get Me Out of Here! on the Ten Network and exited the Jungle in third place.

Shane is an ambassador for Breast Cancer Network Australia (BCNA). In 2010, Crawf – as he is affectionately known – completed an amazing feat to make Aussies proud, walking from Adelaide to Melbourne to raise money and awareness for BCNA. That’s What I’m Walkin’ About lasted 12 days, raised $620,000, and saw Shane run back onto The Footy Show set through streets lined with supporters dressed in pink. In 2013, Shane raised more than $1.3 million for BCNA after riding 3,600 kilometres from Melbourne to Perth in 22 days on his marathon Tour de Crawf. Shane is also an ambassador for Just Like Jack.

Euan Fistrovic Doidge is well known to Australian audiences having starred as Tony Manero in Saturday Night Fever, Felicia in Priscilla Queen of the Desert, and as Marius in Les Misérables. He was the youngest ever nominee for the ‘Helpmann Award for Best Actor in a Supporting Role in a Musical’ for his performance in A Chorus Line. Euan has also appeared in many other musicals including Fun Home, Charlie and the Chocolate Factory, Pippin, Kinky Boots, Legally Blonde and Grease. In 2014 Euan released his debut album Let It Sing. Euan is currently appearing in the national tour of Cruel Intentions.

Fijian born songstress Paulini rose to fame through the first season of Australian Idol, making it through to the final four. Post Idol Paulini rose to the top of the Australian ARIA Charts with her debut Platinum album ‘One Determined Heart’ and her Platinum smash single ‘Angel Eyes’, both hitting the #1 spot and receiving Aria Number 1 Chart Awards. Paulini went on to become a part of the chart-topping group the Young Divas, who had two top 10 albums and two top 10 singles. On the stage Paulini played the lead role as Rachel Marron in The Bodyguard Musical, was a lead vocalist in Saturday Night Fever, and played Dionne in the 50th Anniversary of Hair the Musical. Paulini returned to television in 2019 in the hit show The Masked Singer, and more recently appeared on I’m a Celebrity Get Me Out of Here, where fans fell in love with her again for her voice and sincerity.

Released as a concept album in 1969, the stage version of Joseph and the Amazing Technicolor Dreamcoat has become one of the world’s most beloved family musicals. The multi-award-winning show, which began life as a small-scale school concert, has been performed hundreds of times in over 80 countries worldwide. The show features songs that have gone on to become pop and musical theatre classics, including Any Dream Will Do, Close Every Door to Me, Jacob and Sons, There’s One More Angel In Heaven and Go Go Go Joseph.

Told entirely through song with the help of The Narrator, Joseph and the Amazing Technicolor Dreamcoat follows the story of Jacob’s favourite son Joseph and his eleven brothers. After being sold into slavery by the brothers, he ingratiates himself with Egyptian noble Potiphar, but ends up in jail after refusing the advances of Potiphar’s wife. While imprisoned, Joseph discovers his ability to interpret dreams, and he soon finds himself in front of the mighty but troubled showman, the Pharaoh. As Joseph strives to resolve Egypt’s famine, he becomes Pharaoh’s right-hand man and eventually reunites with his family.

“A rip-roaring Joseph for the 21st century” – The Sun, UK

personality and mischief” – The Guardian, UK

Most recently the Pharaoh has been played by Jason Donovan in this production at the London Palladium and he can still be seen in the role on the current UK tour of the production.

In Melbourne from November, playing at the Regent Theatre, for a strictly limited season.