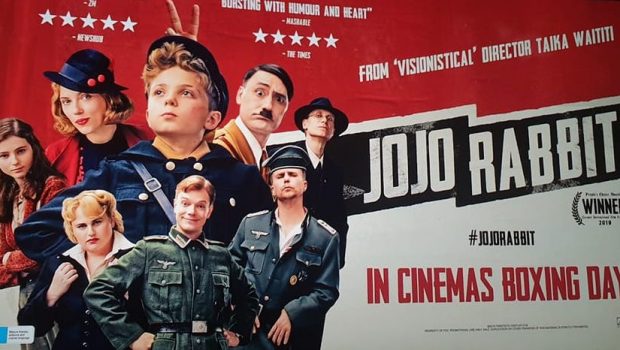 Summary: Jojo and his imaginary friend Hitler are looking forward to him joining the Hitler Youth, through a series of mishaps he ends up with a real friend.

Nearing the end of World War II little Jojo (Roman Griffin Davis) finally gets the chance to join the Hitler Youth as he has been wanting to for ages, his imaginary friend Hitler (Taika Waititi) encourages him to be the best little Nazi he can be. His mother (Scarlett Johansson) is not so sure and just wishes he would go back to being a little boy. Due to a mishap on the weekend training camp, Jojo ends up hospitalised and disabled. Captain Klenzendorf (Sam Rockwell) cops it in the nuts from Jojo’s mum and is put in charge of looking after the kids and defending the town from invasion.

Complicating matters is Elsa (Thomasin McKenzie), who Jojo’s mother has hidden in her house. Knowing that children are perfect informants, she has neglected to tell him. When Jojo finds Elsa’s hiding place and confronts her, she turns the tables and he loses his army knife. Hitler is no help in this situation and all his suggestions are useless. The end of the war is looming, but will Elsa and Jojo make it that far?

I was looking forward to this but was concerned about how it was going to turn out. Jerry Lewis famously tried to do a movie on the Holocaust and chose not to release it at all. Movies such as Come and See, Barefoot Gen and Grave of the Fireflies that do show you war from a child’s perspective and are not to be trifled with. John Marsden’s Tomorrow, when the War Began does have teenagers in it, but they can look after themselves and it is more an action adventure.

Taika Waititi has said during the making of the film that he wanted to have a lighter take on World War II as most of the films from that time period seem to be dark and gritty affairs. From their actual research they found fashions of the time were a lot more colourful. Jojo’s mother’s dresses and Captain Klenzendorf’s battle dress that he designed himself are an example of this. I did like the scrap robot that Jojo has to dress up as you do see those sort of photos from time to time but never in colour.

It reminded me of all those photos of people from Germany posing with Teddybär around the same time as World War II that look like they are having a lot of fun.

While the tone of the story does seem to get it right, you know you are watching a movie about World War II so not everyone is going to make it, especially not in Germany. While there are no actual deaths of children shown on screen, they do end up dying and Jojo is injured and causes injury to others.

It does manage to avoid hitting you over the head with the message, something that a lot of movies about this time period do. We already know there was a war, we do not need the moral lecture again. The Holocaust is a difficult thing to talk about without bringing strong emotions into it. Taika Waititi said he wanted to play Hilter because “Fuck Hitler!” and also Hitler gets kicked in the nuts in this movie. He gets to play many types of Hitler, the fun-loving wacky Hitler, the serious speech giving Hitler, the insane with rage Hitler, the supportive Hitler and downtrodden Hitler.

Roman Griffin Davis as Jojo is great as he is very honest with his feelings and acts differently to how you would expect him to in the situation. This is his first acting role and hopefully he goes on to do a lot of things.

Thomasin McKenzie is also good as Elsa and plays differently to what you would expect. Her character takes control of the situation and reverses a scene that you think was going to end up like the opening of Inglourious Basterds.

Scarlett Johansson was refreshing it is was so good to see her outside of a Marvel movie. This is my favourite thing I have seen her in since Under the Skin. She does get to do a great scene where she pretends to be Jojo’s absent father and has an argument with herself.

The rest of the supporting cast hold up well with special mention of Stephen Merchant’s creepy Gestapo officer, you half expect the Ark to open and his eyeballs to melt.

The absurdity of some of the situations of the war also comes through, with the scene with the Gestapo raiding the house where the phrase “Heil Hitler” is used 33 times in just over 1 minute. Reminded me of the “Doctor” scene from Spies Like Us. Also the “paper-like” uniform that one of Jojo’s friends has to wear near the end as they are totally out of fabric to use.

While there is not much actual fighting in this movie for a movie set during World War II, it still does tell a good story set in that time period and does remind me of something like the Book Thief in that regard that covered some of the same ground.

I would recommend this movie even if you would not normally watch war movies or historical dramas. There is enough in the story and comedy elements to get something out of it even without the heavy themes behind it.

As the director said you can use comedy to deliver a message more effectively than just giving a lecture as people let their guard down and more likely to take on board what you are saying.

Based on the book Caging Skies by Christine Leuens