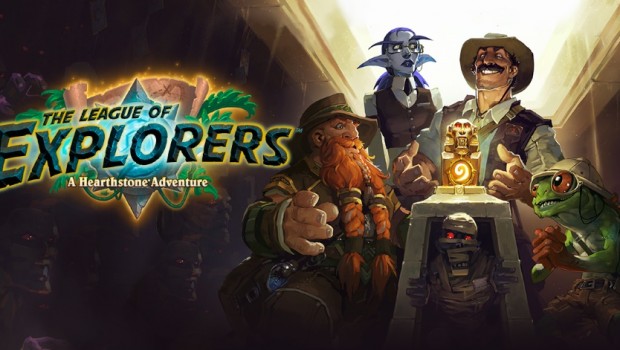 Join the Expedition! The League of Explorers coming to Hearthstone November 13

SYDNEY, Australia—November 7, 2015—Grab your hat and torch; it’s time to go exploring! Today at BlizzCon®, Blizzard Entertainment revealed The League of Explorers™—a brand-new Adventure that sends brave duellists far and wide on harrowing expeditions to recover a mysterious lost relic. The newest addition to Hearthstone’s Adventure Mode, The League of Explorers will pit adventurers against dastardly villains in fierce encounters that will require unique strategies to conquer. And yes, there might be serpents.

“League of Explorers is a fun mix of memorable locations from Warcraft and exciting new locations to battle through,” said Mike Morhaime, CEO and cofounder of Blizzard Entertainment. “Players who join the expedition are in for a good time and will walk away with some great new cards for their collections.”

The League of Explorers introduces four intrepid adventurers—Elise Starseeker, Reno Jackson, Sir Finley Mrrgglton, and Brann Bronzebeard—and invites players to join their journey through a series of exotic  destinations, some familiar and some new, to recover an artifact of immense power. These brave explorers will face many perils as they navigate through the Temple of Orsis, Uldaman, the Ruined City, and the Hall of Explorers in hopes of discovering lost artifacts that will lead them closer to the relic. Escaping giant boulders and emerging from all of the locations in one piece will reward adventurers with a combined total of 45 treasured new cards, bringing a slew of new tactics to the game.

Available for exploration starting November 13 on Windows® and Mac® PCs; Windows, iOS, and Android™ tablets; and iOS and Android mobile phones, the four League of Explorers locations will open on a weekly basis (one per week) over the course of a month, with a one-week break in the middle during the U.S. Thanksgiving holiday. The League of Explorers can be purchased in full for $24.99 AUD, one location at a time for 700 gold or $8.99 AUD each, or in discounted bundles based on the number of individual locations already purchased.

Prepare for the perilous journey ahead and learn more about Hearthstone at www.playhearthstone.com.