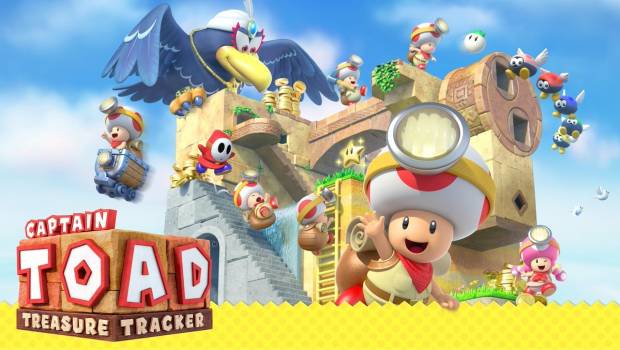 JOIN MARIO’S PLUCKY LITTLE FRIEND CAPTAIN TOAD ON A BIG ADVENTURE OF HIS OWN IN CAPTAIN TOAD: TREASURE TRACKER FOR NINTENDO SWITCH AND NINTENDO 3DS

New trailer showcases the brand new levels based on Kingdoms from Super Mario Odyssey, and a free Nintendo eShop demo is available to download now

21st June, 2018 – Grab your backpack and headtorch, and prepare to set off on a charming puzzle-platforming adventure in Captain Toad: Treasure Tracker, coming to Nintendo Switch and Nintendo 3DS family systems on 13th July. The game includes levels based on four of the Kingdoms from Super Mario Odyssey, with the newly released Captain Toad: Treasure Tracker Overview Trailer offering a sneak peek at them. Players who can’t wait to meet the sometimes nervous but always courageous Captain Toad can now download a free demo version of the game – available for both Nintendo Switch and Nintendo 3DS.

As a platforming game, Captain Toad: Treasure Tracker is a little different from the rest. For starters, the Captain’s heavy backpack means jumping is not possible – so in order to guide him past the various enemies, traps and obstacles that stand between him and the precious Power Star in each course, players will need to take a different approach. Rather than rushing in head-first, it’s important to put some thought into plotting Captain Toad’s route, and even more important to use the adjustable camera to carefully observe the surroundings from all angles. Each level is a compact and lovingly-crafted diorama in its own right, designed using the same “miniature garden” concept – called “hakoniwa” in Japanese – that inspired much of the level design in Super Mario Odyssey. This means that lots of charming details, along with plenty of surprises and hidden collectibles, are packed in to what at first glance might seem like quite a small space.

With more than 70 levels to conquer, there’s plenty to keep even the most intrepid explorer occupied for a long while. As seen in the Overview Trailer, four of these are bonus levels based on Kingdoms featured in Super Mario Odyssey: Metro Kingdom, Sand Kingdom, Cascade Kingdom and Luncheon Kingdom. These bonus levels can be unlocked through regular gameplay, but they can be accessed straight away by scanning one of the Super Mario Odyssey amiibo figures: Mario (Wedding Outfit), Peach (Wedding Outfit) and Bowser (Wedding Outfit). Scanning the Toad amiibo figure will cause a powerful Invincibility Mushroom to appear, while scanning any other amiibo will provide the useful bonus of a 1-Up or two.

The Nintendo Switch version of Captain Toad: Treasure Tracker is available now for digital pre-load via Nintendo eShop, priced at AU$59.95 / NZ$69.95. By purchasing the game now and pre-loading it to their Nintendo Switch consoles, keen players can be among the first to access the game when it is released at 00:00 local time on 13th July. It’s also worth remembering that digital purchases earn Gold Points worth 5% of the total amount paid, which can be spent on future purchases of Nintendo Switch games and downloadable content in Nintendo eShop.

Join Captain Toad on a pleasantly puzzling adventure in Captain Toad: Treasure Tracker, coming to Nintendo Switch and Nintendo 3DS family systems on 13th July 2018. You’ll even get the chance to revisit some favourite Kingdoms from Super Mario Odyssey! A free demo version of the game is available now on Nintendo eShop.