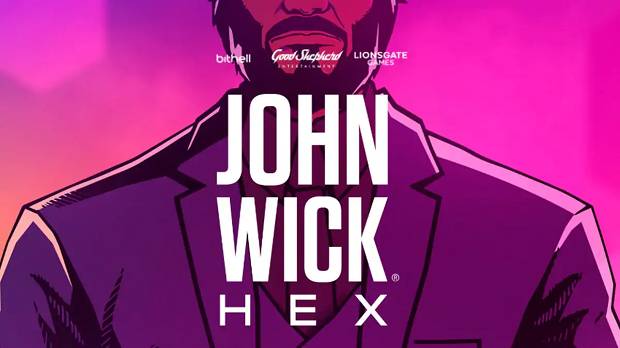 Summary: John Wick Hex is a game that lacks the flair and identity of the franchise it's trying to represent. A decent enough attempt, but a few key issues and lack of replay value diminishes it's otherwise earnest effort.

John Wick Hex, is a timeline strategy game with elements of resource management. You, control John Wick, the titular character, are in pursuit of international criminal master mind Hex. The crime boss has kidnapped Winston and Charon, from the New York branch of the Continental. The High Table wants them retrieved and Hex to swear fealty once more. On your hunt, you must defeat and dismantle his network of underbosses and enforcers throughout New York and Switzerland. Only then, will Hex’s reign be stopped and the High Table’s dominance restored. 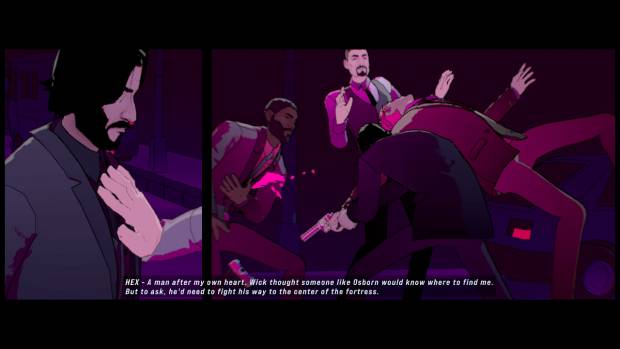 John Wick Hex is a fairly simple game. One that is very easy to play. So much so that the game barely even tells you how to play, not that it really needs to. It’s a linear, timelines strategy game. Similar to something like XCOM. Instead of controlling a squad however, you control only John Wick. Not that you need anyone else, John Wick is all you’ll ever need. You have three melee skills and two ranged; strike, push and takedown for melee and shoot, throw weapon for ranged. Each of these have different pros and cons.

These are tied directly to the only two resource managements in the game. Bandages, for when you’re wounded and focus, for all the cool stuff like takedowns etc. Focus allows you to push, takedown and throw weapon. Once you run out, you can take a moment to refocus, filling your focus bar. Bandaging yourself allows you to recover from any damage you’ve taken until the point of use. All of these actions, including basic striking and moving, use the games main resource; time.

Every action in John Wick Hex takes time. Some longer than others, striking, waiting or moving take the smallest amount of time. Whilst shooting, pushing, takedowns and bandaging take the longest. Enemies spawn as you move through the level, there’s a certain capped limit of enemies per stage. So you can take your time progressing through the level, but there are par scores to beat for special titles. These weren’t really a motivating factor in pushing me to strive for par times.

Enemies spawn as you progress the level, so at times when I thought it was clear. I’d rush headlong into the next zone only to be ambushed and taken out. So I began to make sure I moved through each stage carefully and methodically. In an aim to clear it first fun. The spawn locations and numbers are the same every try so you can very easily get used to the layout of the maps and know where everything will come from. Your health and focus levels do not reset either, so if you’re reckless, you’ll pay the price later on. 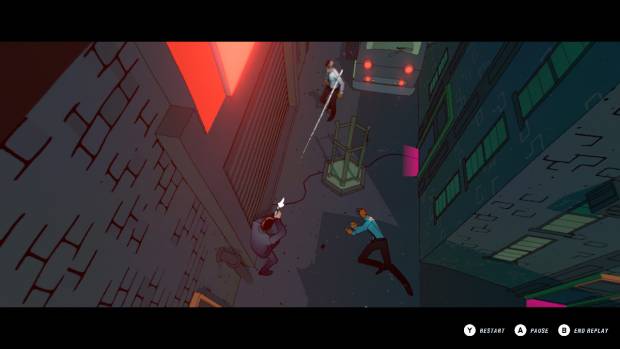 John Wick Hex, also has it’s own in game currency. This is used to purchase passive upgrades or consumables for later maps. These cannot be carried over so it really incentivizes the player to really think about how to manage these, as they are limited. Do you play a bit recklessly? Maybe drop a bandage somewhere in the next level to make recovery a little easier. Do you want to be more hardy? Maybe lose less focus per each special move? Invest some points in these passive upgrades and John will become unstoppable. As long as you’re careful.

I found the game, probably a bit too easy? Sure I died a couple times. But the nature of the game means even if you die once, you’ll know most of the spawn locations and can take it slower the next time. All the enemy types are pushovers, there are basically only three types, standard, armed and bosses.

Standard foes, are 9mm toting hotshots with poor aim that are easily exploited by walking around corners and drawing them into melee range. Armored, are even easier to exploit, they carry no weapons but take longer to put down. So you can freely get two shots in, and then throw a weapon at them. Or simply save your focus for takedowns which take most of these guys out completely.

Bosses, are the biggest joke, they’re gun toting sure, they’re accurate sure. But follow the same dumb ruleset as the 9mm standard foes. Draw them in by hiding around corners and then beat them up until their focus is depleted. Then simply shoot them as they attempt to flee to recover said focus. It’s basically a joke. The only threat I felt in the game was the few times I blindly walked into an area that I thought I cleared only to be ambushed and slowly taken down. 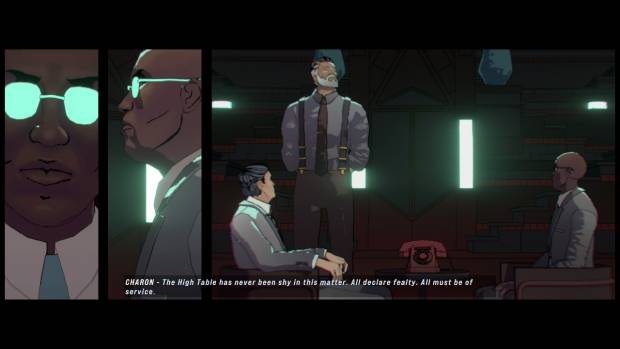 Stringing combos together makes you feel like Baba Yaga himself, but the janky animations remove all sense of badassery

John Wick Hex has an interesting, almost cartoony, cell shaded art style that strangely fits in really well here. As you move John through the level, parts of the environment are revealed or shrouded as they enter or leave your line of sight. You can’t see enemies on the field until they cross your line of sight and time pauses when you spot an enemy or take damage, giving you all the time in the world to make your next move.

This is both a pro and a con, it makes for easy gameplay but strays from the fast paced action John Wick movies are known for. Every stage has a unique layout, giving a fresh experience to each new level to keep it from getting stale. The colour scheme is an almost sin city, film noir filter. Yet somehow it just works.

I have some issues however, John Wick looks as stoic as ever, even more so that Keanu himself in the movies. So it comes off as a somewhat stiff interpretation. Wintson and Charon have their usual charm and Hex has all the character of a well fleshed out mob boss. Clean, well dressed, sharp beard, witty remarks, you name it. But all, and I do mean, all enemy types are identical. Every single 9mm thug, every fisticuff bouncer look identical. The underbosses are unique in design only, they have no voice lines and even less charisma. They follow the usual stereotypes too, clean business man, drugged up, tattooed Russian club owner, etc.

The physics in John Wick Hex too, leave something to be desired. Frequent glitches put your foes in awkward and unnatural death positions, rag doll physics throw your enemies across the room after unloading a few 9mm rounds into them. I didn’t know these guys were packing explosive rounds!

When the game works, it’s a solid experience. Slapping a few rounds into one guy before throwing an empty gun at another to stun him before running up to him and doing a sweet takedown. Combos like these are as sweet as candy and when I can pull it off without janky animation physics, it looks that much cooler. And making the moves on a time based system, means I get to take my time and plan out the coolest sequence of moves. The best part is watching it all unfold.

There’s not a lot to say here. John Wick Hex doesn’t have much in the way of audio. Gunshots are generic, fisticuffs sound exactly the same every time. Takedowns are equally unremarkable. Keanu doesn’t say a work in the game, likely too busy working on Cyberpunk at the time of development.

Ian McShane and Lance Reddick reprise their roles as Winston and Charon with the quirky, cocky humour they’ve always brought to the roles. This is very well received, but the absence of Keanu is really felt. Even for a man of few words. John feels like a blank, Keanu flavoured slate for the player to project onto. To feel like they’re as badass as the Baba Yaga himself. Hex, who is played by the talented Try Baker brings another charismatic performance to the story, but even with his stellar performance. The game lacks impact.

The soundtracks are nice, typical dark city undertones that we’ve all come to expect in John Wick films. But even these feel cheap, repetitive and lacking real flair. 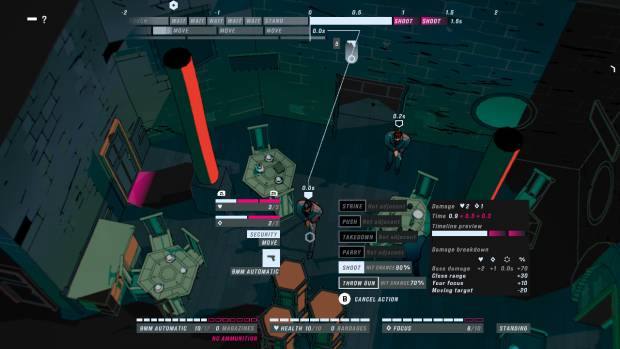 John Wick Hex is more fun than I expected, less than I’d hoped for. The linearity makes the game a one time play experience for me. The game itself is one best play at a slow pace, for an hour or two a day to get drag the fun bits out for the longest time possible. There is no incentive to replay the game at all.

Spawn locations are the same each run, meaning that the fresh level design is done after the first run. Janky animations can sometimes add humour, but in a game like John Wick Hex, that takes itself seriously, it’s sorely misplaced. Reprised roles make for little amusement when not all the original cast could be there and Troy Baker as Hex is overshadowed by the cliche story and easily exploitable henchmen.

John Wick Hex would greatly benefit from enhanced AI, less janky animation, Keanu Reeves reprising his role and different game modes, with more variety of enemies. Its $30 price tag isn’t so bad, but for a game that gives you 2/3rds the experience, it should be noted that 2/3rds the price isn’t an excuse.

I’d recommend buying it one sale no less than 30% or more off. For a game that can be beaten in just a few hours and with such a minimal replay value. I don’t think it’s worth the full price. John Wick Hex is okay, not good, not great, not terrible. One of those games that will fly under the radar of both good and bad reviews alike.

All footage used was of my own playthrough, you can find my other articles right here 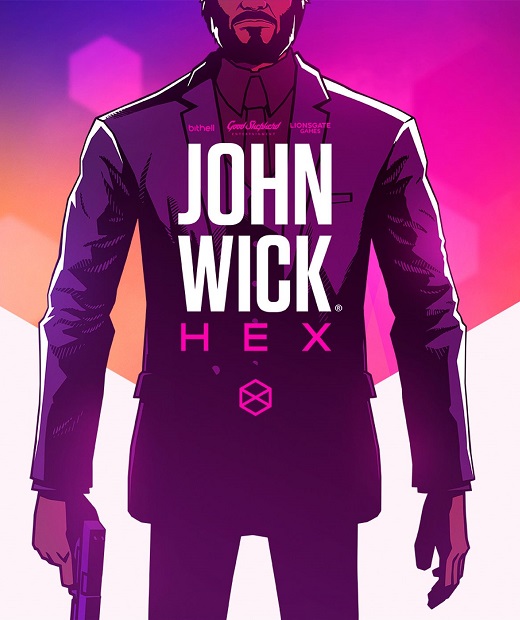