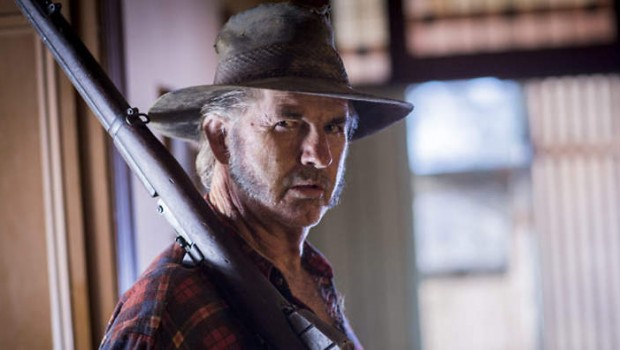 Australian cinema’s scariest bad guy, John Jarratt, has placed himself behind and in front of the camera in his directorial debut, STALKHER, an inappropriately funny, dark, romantic thriller, set for theatrical release in late August, distributed by The Backlot Films.

Written by Kris Maric and co-directed by Kaarin Fairfax (well, Jarratt spends half the film tied to a chair, doesn’t he?), who also co-stars with Jarratt, STALKHER is the tale of two people destined for each other, yet destined to be each other’s demise. Offering raw dialogue and characters that will make you laugh at all the wrong things, STALKHER is a gritty battle of the sexes with verbal and physical blows that come thick and fast. Audiences will be kept guessing as they follow twists and turns that lead them to truly wonder who is the cat and who is the mouse in this demented lover’s game.

Jarratt comments on reading the first draft of the script, “It instantly made me think of MISERY meets WHO’S AFRAID OF VIRGINIA WOOLF?”.

The film sees Jarratt in the director’s seat for the first time. He also plays the film’s lead, Jack – a rough, charismatic but jaded pharmacist with a stalking obsession. The tables quickly turn when Jack discovers that his prey has claws. “I spent most of my time directing the film while tied to a chair with my hands bound – a fun challenge that I really enjoyed” says Jarratt.

Fans of WOLF CREEK 1 & 2 will enjoy seeing Jarratt getting his comeuppance – the hunter becoming the hunted.

The film also features distinguished Australian talent, Kaarin Fairfax returning to the big screen as Emily – a friendly nurse with a penchant for baking and bad habits. As things unfold we see that Emily’s scars run deeper than her skin. It doesn’t take long for Jack to realise that Emily is not the woman he thought she was.

Executive Producer and industry veteran Alan Finney was blown away by the final product, “STALKHER is a creative masterpiece that relies on two brilliant performances and great dialogue.”

Taking place over one sweltering summer night, sweat drips as the humid air hangs thick with tension. The thrilling story is set against a rustic Aussie backdrop with a hint of country vintage charm all washed down with a cup of laced hot cocoa. From dark until dawn a twisted and thrilling courtship of the sexes takes place that leads one to wonder which one of them will survive the night.

STALKHER has a powerful soundtrack brimming with internationally renowned Australian music artists and songs sourced from as early as the 1920s and leading up to the present. Featuring the likes of Nick Cave, Skyhooks and Sarah Blasko, with a few surprises – including John Jarratt’s song debut ‘Killer in Me’. The music in the film provides the perfect blend of tension and release. From Aussie rock to country twang and haunting lullabies the soundtrack is characterised by a strong dash of old school rock-n-roll, blues and country.

The Backlot Films director/manager Tony Ianiro is relishing using STALKHER as a flagship film project for The Backlot Films inaugural major cinema release programme. Ianiro says, “Audiences should get ready for a night of sex, cupcakes and rock ‘n’ roll.”

STALKHER’s the ultimate Romeo and Juliet story that got old and bitter, with grit and gusto that will bowl the audiences over in shock and laughter. It’s a dark, demented look at love, sex, and kitchen renovations for the over 40’s.