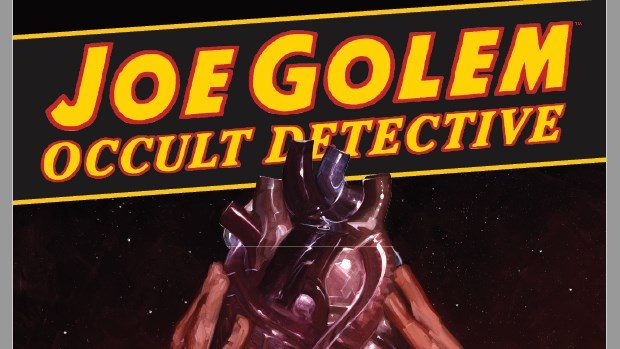 Summary: Joe Golem is classic pulp fiction material. The archetypal detective... with a twist. Mixing classic P.I. story telling with the occult makes for an even more compelling story.

Prior to reading Joe Golem: Occult Detective, my main experience from the creativeness of Mike Mignola and his Mignolaverse was through Hellboy and the B.P.R.D. and I wasn’t familiar with Joe Golem… however that’s because Joe is not part of this universe but rather his own standalone world and given the pedigree of its creators, I was bound to enjoy the story. I was not mistaken! If you have direct experience or simply general knowledge of the classic pulp fiction stories you will find many familiar elements here.

If you took the classic detective comics from the golden age of Pulp magazine’s and infused it with the occult tales of the early 1900’s you would have a reasonable idea of what Joe Golem: Occult Detective is like. But flesh out that basic concept with threads from the Mignolaverse to weave through the story and bind it to the wider world of paranormal and occult for which Mike is so well known and you begin to get a far more engaging character and tale. Little crumbs are placed throughout the story to help you find your way through the adventure as it unfolds. Layering Joe’s discovering who he really is while he is trying to figure out what the deal is with the Pentajulum and those associated with it gives the reader a lot of story to follow and enjoy.

If you have a flick through this book you may well get the impression it’s a lot like Indiana Jones if he devoted his time to working as an occult detective and you wouldn’t be entirely wrong (I guess kind of like crossing Dr Jones with Rick Deckard from Bladerunner), if you want to go the other more traditional route you could say Joe is basically Sam Spade from The Maltese Falcon but rather than chasing down the MacGuffin of a statue, he is chasing down the Pentajulum (I love the way that sounds). So basically you have your strong silent type, thrust into many fisticuffs and other dangerous situations, all while he is just trying to get to the bottom of the mystery.

Joe Golem: Occult Detective shows that there is no Mike Mignola story I have not liked. Interesting characters thrust into fascinating situations flavoured with mythology and streaks of the paranormal… I’m sold. It’s a compelling story with a personal discovery tale wrapped within. If you’ve read and enjoyed other stories from Mike Mignola I feel quite comfortable saying you are going to love this.