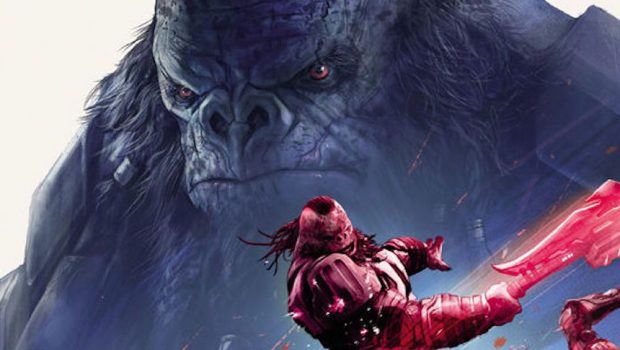 This isn’t your first time working on a video game, comic tie-in. Do find that you need to approach writing these kinds of stories differently?

There are some things unique to video game comics. With a tie-in to a movie or TV show, you’re usually working from something completed you can watch straight through — or, in the case of a show that’s not out yet, you have scripts you can read. Only occasionally do you have access to the people who created or are creating the show; usually you’re dealing with a licensing department that answers your questions.

With video game comics, frequently you’re working with the designers of the games themselves, meaning you get a lot more insight into what they intended to do — or intend to do in the future in other games. The feedback is a lot more robust because you’re dealing with the actual content creators. This results in fun dynamics sometimes.

Another big difference is that in games, there’s usually a character or characters the player identifies with — and there are sometimes limits to what can be done with that character. I usually tend to fill in the blanks around the periphery, so as not to collide with the path of a character whose future is still in development. 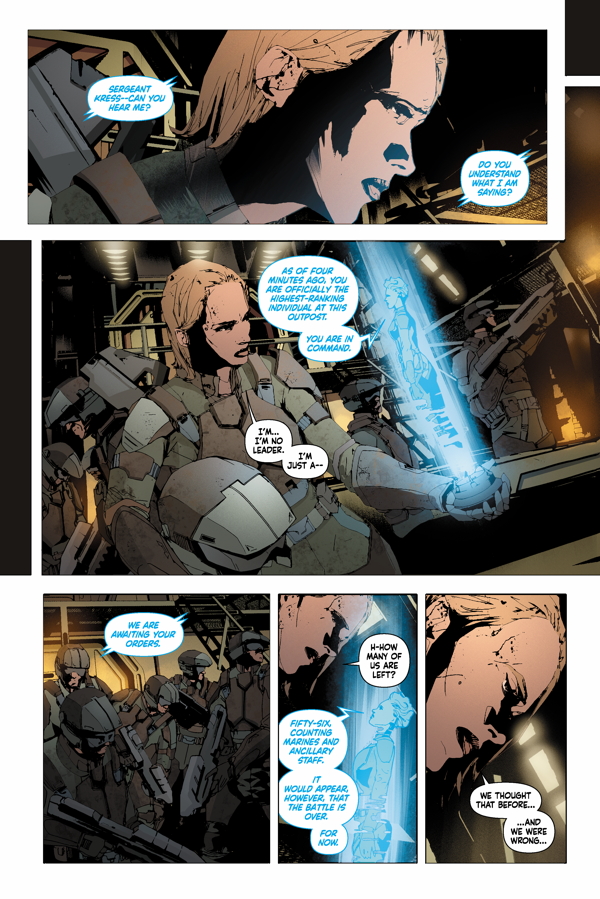 This isn’t your first venture into the Halo universe, as you have previously worked Halo: Tales from Slipspace. I’m curious, before coming
to this franchise had you played any Halo games, or were you completely new to this franchise?

My kids had played it — they’d specifically requested the Halo Special Edition Xbox for Christmas a ways back. I’m a video gamer of old but usually prefer to watch their progress, as they’re a lot better at Halo than I am!

In this story, fans will get a closer glimpse into Atriox’s past and the rise of his legacy. Did you encounter any difficulties when trying to capture the tone of the narrative and the nuances of these characters?

Atriox is a complex character. He’s violent and brutal, and we show that — but he’s also a brilliant tactician and has thought a lot about the state of things in the universe, and so we try to show that, too, when we can. He’s a character of few words who can also give a rousing speech to motivate the Banished. Showing that balance in his character was something we worked hard at.

343 Industries was a lot of help, as well, in helping us understand the political landscape during the different points of the timeline we were setting this series at. There are a lot of changes going on, and we did our best to show how things evolved as the Covenant lost control. 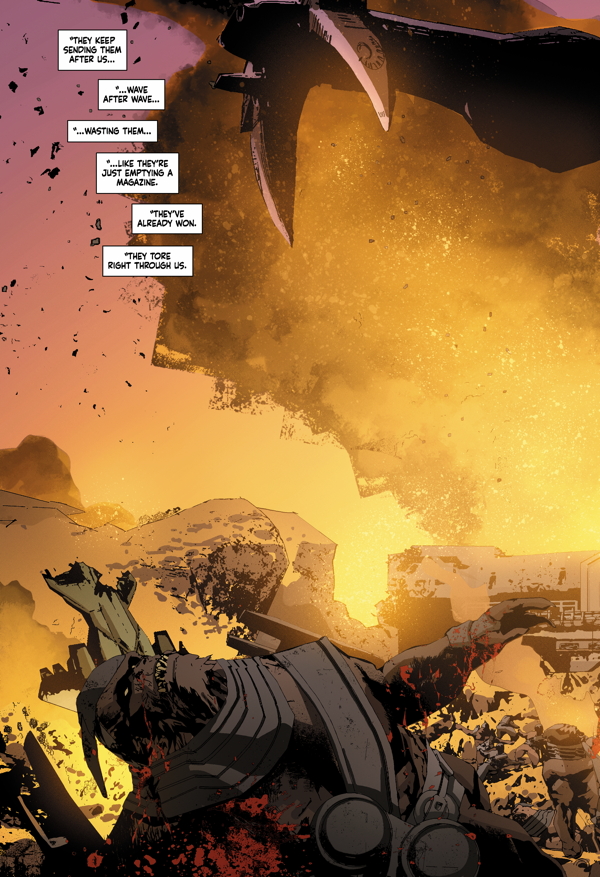 When delving into an already pre-existing universe with an established lore is something you’re familiar with doing with your extensive work on the Star Wars franchise. So, what was it that drew you to this universe and were there any particular aspects that appealed to you the more than others?

One of the things that’s interesting to me about Halo is that the state of play in the cosmos is very much in flux: it’s not a simple breakdown of good guys and bad guys, but there are multiple parties with multiple aims. And, as we saw at the end of Guardians, things can happen which change everything in a very short period of time. That’s pretty good to have in a story of interstellar civilizations, where normally changes happen at a much more glacial pace. We see major changes in Halo that happen not just over characters’ lifetimes, but that individuals have a major chance of playing a role in. That’s what you’re looking for in a video game franchise — and narratively it creates good opportunities for the writers. 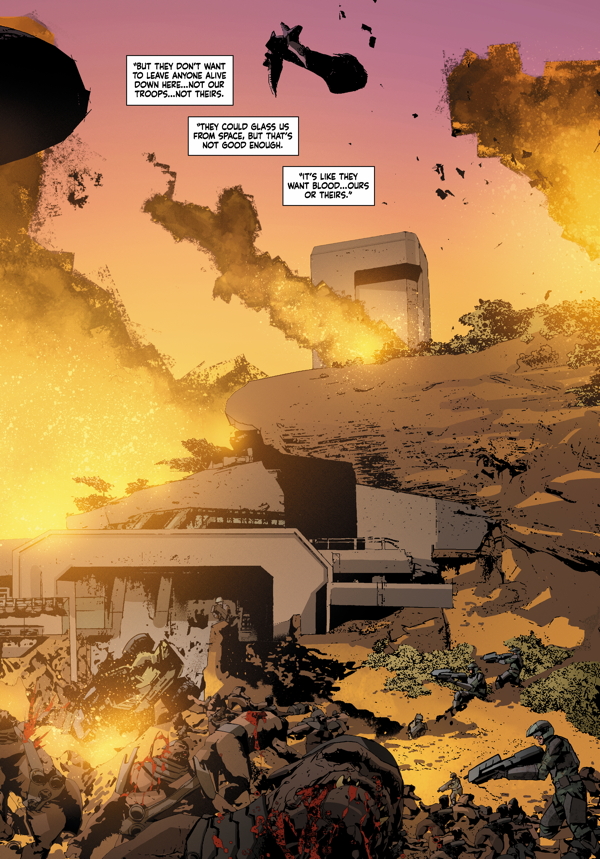 What about people who aren’t familiar with the Halo universe but are fans of your previous work, like on Knights Of The Old Republic, is there anything in this story that will appeal to them?

My Knights of the Old Republic comics and my Mass Effect comics kind of follow what I mentioned above — depicting very big events, but at the individual level. We see how individual characters live, and how their choices impact things on a large scale. I think with this title we see Atriox and his followers making similar kinds of choices as things go along, and those have big ramifications for the galaxy. So there’s really kind of a historical “you are there” feeling with a lot of these stories. The story I did for last year’s Halo: Fractures anthology for Simon & Schuster was similar.

Folks can read more about my work on my website, http://www.farawaypress.com, where I have production notes on most of the comics and novels I’ve done — and also can find me on Twitter at @jjmfaraway. 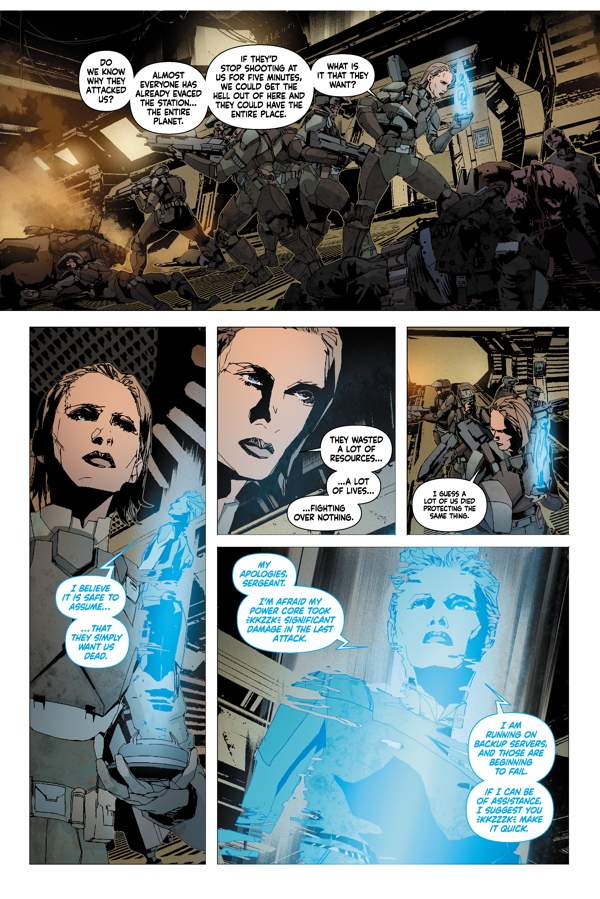