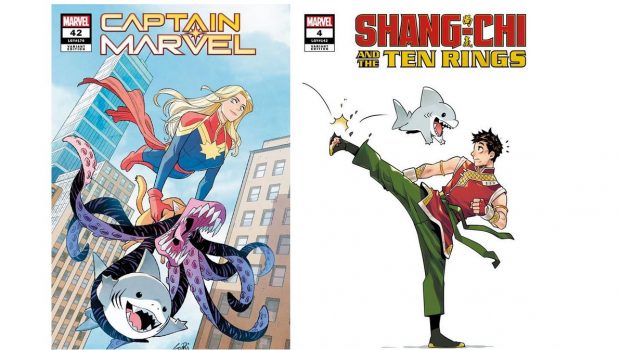 JEFF THE LANDSHARK MAKES BIG WAVES ON A NEW SERIES OF VARIANT COVERS!

Jeff the Landshark, everyone’s favorite Super Hero sidekick, will steal the spotlight in a new series of variant covers! Arriving in October, these covers will feature Jeff teaming up with the likes of Captain Marvel, Captain America, and Shang-Chi. The three pieces are by Gurihiru, the artist behind Jeff’s current misadventures in the It’s Jeff Marvel Unlimited series, and Nao Fuji, known for their charming work on Marvel Meow. Jeff’s recent appearance on Guirhiru’s San Diego Comic-Con exclusive variant cover for CAPTAIN MARVEL #39 was a tremendous hit with attendees and now, more fans can get in on the craze with these three delightful new covers!

Check out the JEFF THE LANDSHARK covers for CAPTAIN MARVEL #42 and SHANG-CHI AND THE TEN RINGS #4 now and keep an eye out next week for the reveal of the final JEFF THE LANDSHARK variant cover! For more information, visit Marvel.com.