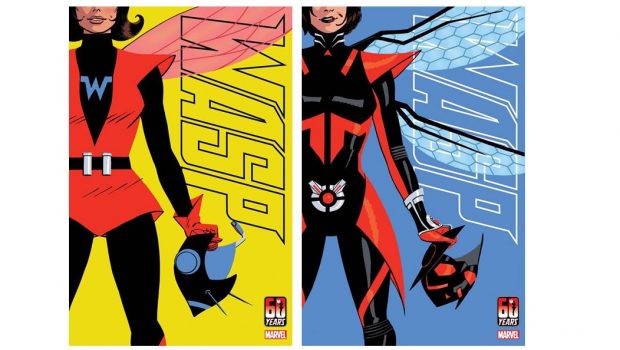 Since the very dawn of the Marvel super hero age, Janet Van Dyne has enchanted comic book fans as the founding Avenger known as the Wasp! Now, after 60 years of being a super hero and fashion icon, the character will headline a new four-issue limited series!

Arriving in January, WASP will be written by superstar Marvel mastermind Al Ewing and drawn by Kasia Nie, known for her acclaimed work on titles like Mockingbird and Age of Conan: Belit. Like Ewing’s hit Ant-Man series currently on stands, WASP will pay tribute to Janet’s incredible legacy by shedding new light on her wild Silver Age origin, spotlighting her relationship with protégé Nadia Van Dyne, and paving the way for a bright future! The saga will also directly lead into another Ewing-penned series launching in the new year!

After countless Avengers missions, earth-shattering battles, and fabulous costumes, Janet Van Dyne is ready to start a new chapter in her legendary super hero career! But as she sets out to change up her role within Earth’s Mightiest Heroes, a villain from her past rises out of the shadows to ruin all she’s worked for. Joined by Nadia Van Dyne, Janet and Nadia team up against a dangerous new organization with shocking connections to both their histories. As the threat grows more urgent, Janet and Nadia will face a test so great that they may become the very thing they fear most…

“The Ant-Man series was a whole lot of fun and gave me a new appreciation for Janet Van Dyne and her world – and when I went digging into her past, there was a whole story there just waiting to be unearthed,” Ewing explained. “If you weren’t a fan of the Wondrous Wasp before – not to mention her adopted daughter Nadia Van Dyne – you will be when we’re done!”

“I’m super excited to work with Al and rest of the team on this anniversary tribute to Wasp,” Nie added. “I love Janet, she’s one of my favorite Marvel characters—a mature person with an uneasy past, a successful woman and the best mom to Nadia. She’s unstoppable.”

Check out two of Tom Reilly’s main covers for the series, following the same bold design as his beloved covers for the Ant-Man series, and get swept away in Janet Van Dyne’s new era when WASP #1 arrives in January! For more information, visit Marvel.com.