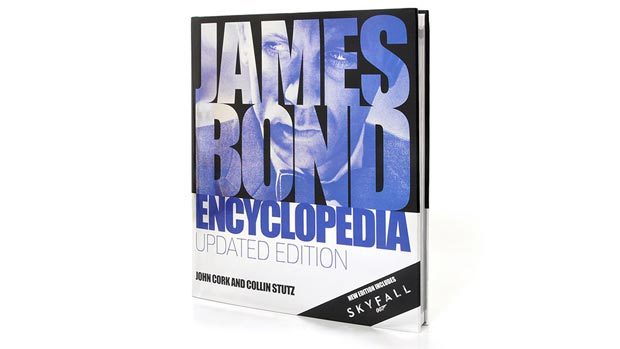 Summary: The James Bond Encyclopedia Update Edition is like walking through movie history and is brimming with amazing information and photos!

This beautifully presented hardcover book from DK is all about Ian Fleming’s extraordinary created in the last century called James Bond which has thankfully crossed over to the 21st century. As you can garner from the title, this hardcover book is all about James Bond (aka 007) that is carefully compiled by John Cork and Collin Stutz. This encyclopaedia also touches upon the films from Dr. No (1962), all the way to Skyfall (2013). Even though the ‘latest’ Bond film, Spectre is not included, this hardcover book is still worth the buy given the amazing content, interesting facts and stunning imagery. 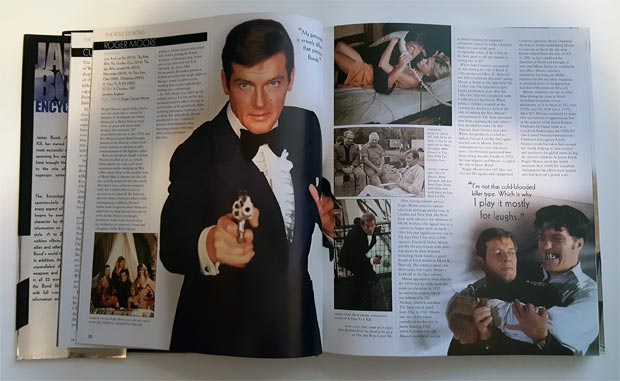 This book is also split into thirteen sections that include the foreword, introduction, Ian Fleming, the Bond Style, The role of Bond, Bond Villains, Bond Women, Supporting Cast, Vehicles, Weapons & Equipment, The Movies, Index and the Acknowledgements. However as a reader, what really stood out for me was revisiting the diverse characters from the Bond mythology that include the nefarious villains to the beautiful women with both being a staple to James Bond. The James Bond Encyclopaedia even touches upon the skills, his classy wardrobe and of course his unique style that made him the charming spy with a license to kill. 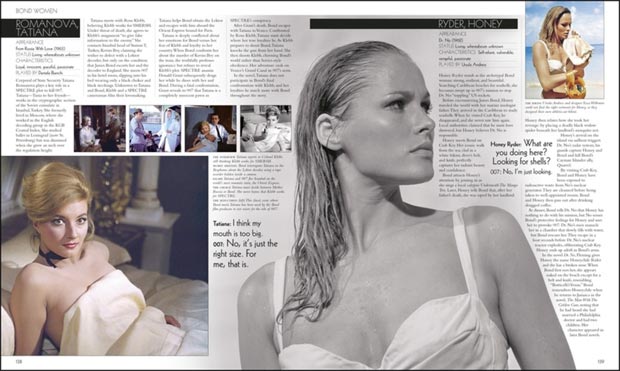 In relation to the talented actors who have starred as Bond, this hardcover books dedicates a two page spread to each that include Sean Connery, Australia’s very own George Lazenby, Roger Moore, Timothy Dalton, Pierce Brosnan to the current 007 Daniel Craig. Each of these pages also mentions the films that they starred in as this enigmatic spy plus what made their rendition of the character so special, including a history of the actor themselves. I actually found out that Roger Moore was in the British Military (that’s kind of cool) and that Timothy Dalton’s grandmother performed with the legendary Charlie Chaplin. 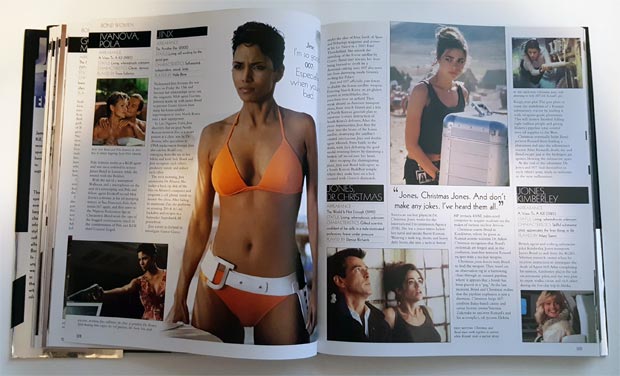 This Who’s Who of Bond additionally boasts some of the best villains to have ever graced the silver screen with the likes of Blofeld (founder of Spectre) and was played a handful of actors, including the late great Telly Savalas. Of course, one of my favourite villains was Jaws (Richard Kiel), the giant of a man with silver teeth who always gave Bond a true challenge, particularly when it came to physical strength. Reading his fictitious biography again really made me want to check out Moonraker again. 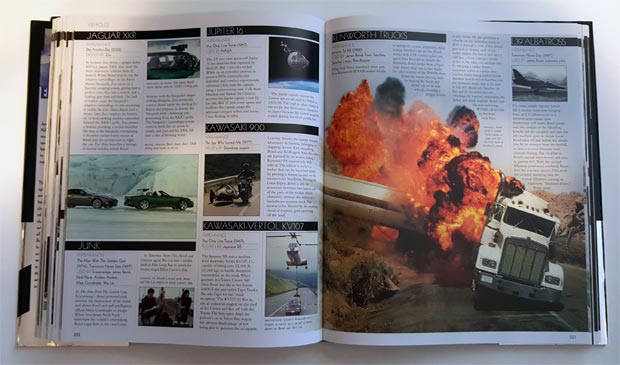 Then you have the man with the deadly hat Oddjob (Harold Sakata, Tosh Togo) to Scaramanga (Christopher Lee) and the information helps highlight their diverse and villainous histories. Add in the Bond Girls such as the beautiful Pam Bouvier (Carey Lowell), the charismatic Pussy Galore (Honor Blackman) and delightful Octopussy (Maud Adams) and although these women were sex objects in many of the films, they were still powerful women who really added uniqueness to the various stories of 007. 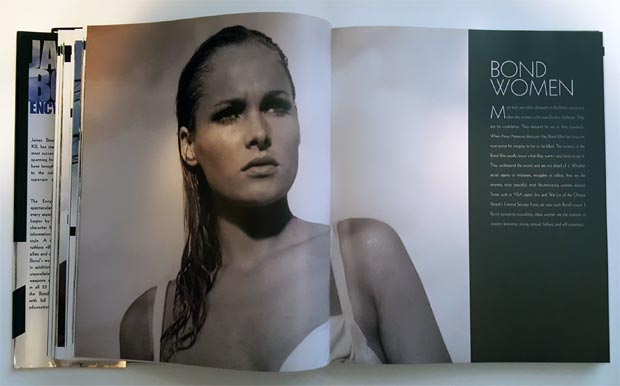 Other interesting titbits include the wondrous vehicles of the franchise such as the Lotus Esprit which appeared in the film The Spy Who Loved Me (1977) and captivated me as a child when I saw it drive underwater. Of course, gadgets and weapons were another staple of the Bond mythology from relatively obscure props such as the Breitling Diver’s Watch (Thunderball) to Pen Grenades and even the very cool X-Ray Specs that were seen in The World is Not Enough, it’s quite a collection.  Furthermore, this book touches upon the various costumes of the films such as the sensual ‘weighted skirt’ which appeared in Octopussy to Kara Milovy’s beautiful blue evening gown from The Living Daylights which just emphasises the content of this encyclopaedia. 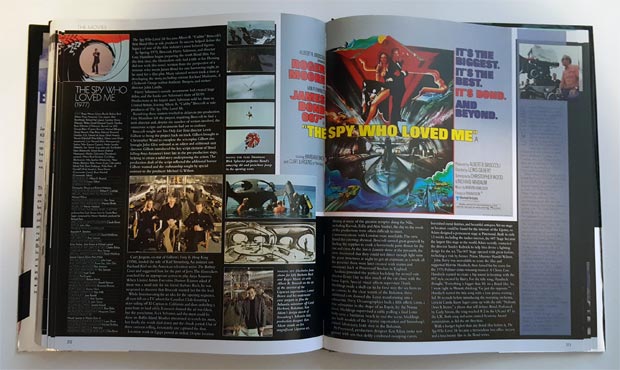 Another cool aspect about this encyclopaedia is that the last part of the book gives the reader a very informative double page spread of each film that includes information about the story, characters and cast plus the production crew. Seeing some of the movie posters is another example of how iconic this character has become, with singers wanting to sing the famous intro song to some candid photos of the actors who helped create these thoroughly enjoyable films. Sure, some of the films were a hit and miss but for the most part, this encyclopaedia just showcases why the franchise has lasted so long. 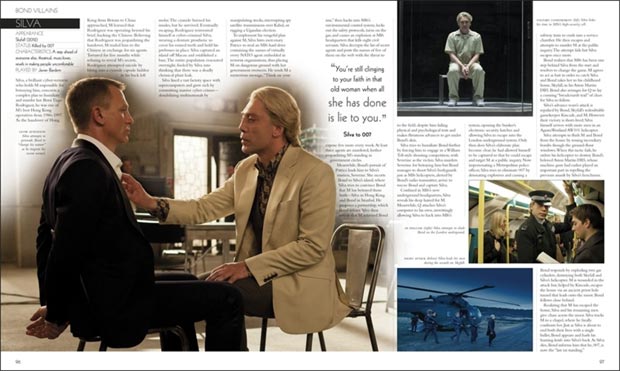 The trouble with print encyclopaedias, particularly with movie franchises is that there will always be a new film or story to add to the mythology (such as Star Wars) but the nonetheless,  it’s still an amazing read and collection of information and photos and successfully captures all the movies from Dr. No to Skyfall. 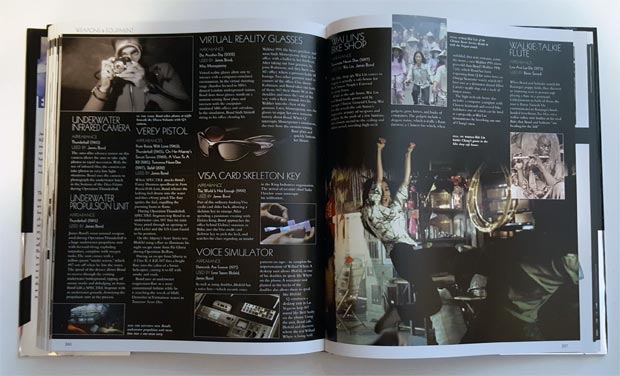 This book is also beautifully produced and unfortunately you cannot get the same quality from an electronic version and even after you have long put this book down, you can pick it up again to flick through the images and information in order to reminiscence about the world’s favourite secret agent. On that note and on the information and breathtaking images featured in this hardcover book, the James Bond Encyclopaedia gets a 5 out 5!