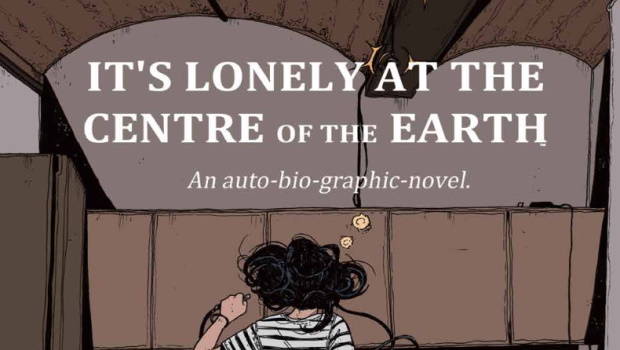 It’s Lonely At The Center Of The Earth Review

It’s Lonely At The Center Of The Earth is, as stated on the cover, an auto-bio-graphic-novel. It covers a six month period of Zoe’s life in which things seem to be falling apart… the only thing she can do to try and put it back together… is to write about it?

It’s Lonely At The Center Of The Earth is a very personal piece that doesn’t shy away from some sensitive and harsh topics (Zoe is kind/responsible enough to put a warning about the content)… but it’s that openness that makes this such a compelling book. I’m sure it has been said that some of the greatest art is created when the artist is truly open and holds nothing back… I get the feeling Zoe hasn’t held anything back here and whilst I certainly hope first and foremost it was cathartic for her… I suspect it may also be something potential readers may need. A phrase repeated throughout is “relatable” and I think there’s a good reason for that. It’s not that readers can relate to the specifics, it’s that the general feelings, the insecurities and self doubts are things that many of us face and seeing it written about so candidly can be very reassuring.

Visually it’s a lovely mix of a variety of visual styles, from caricatures, naturalistic, surreal and really anything and everything in between. Zoe gives her inner voice/s their own visual style and it works wonderfully to give an idea of the tone of the voice… either a menacing creature or an awkward looking figure or perhaps just a young girl… it all speaks to the inner conversations many of us have day to day navigating the world.

There are mentions of self harm and suicide and drug use… so this isn’t going to be for everyone… but the unrestrained manner in which these topics are covered somewhat helps to destigmatise them… it doesn’t hide them away as things to be ashamed of… it brings them into the open and says “yep… this stuff happens and it sucks”. Zoe notes at a number of points that she is “selfish”, perhaps in someways that’s true… but I think we can all be selfish at times… ironically perhaps I think the act of writing this book, though she may call it selfish as it was an act of self preservation of sorts… may in actual fact be selfless… being so open and frank with some harsh realities lets readers see someone for who they are and possibly see themselves in those moments and understand that they aren’t alone… they aren’t a “freak”… that you can go through dark times but come out the other side.

Certainly worth grabbing a copy, it’s a fantastic bit of writing with engaging art that is bound to draw readers in… get your copy now.