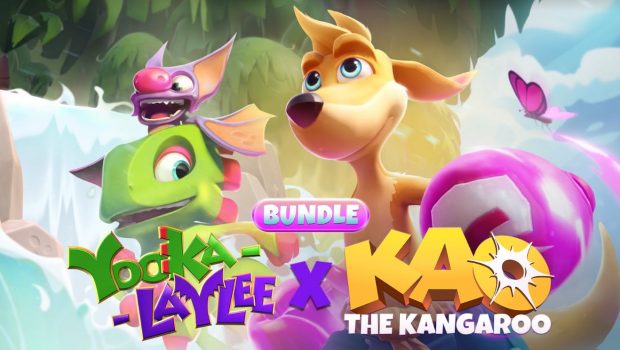 Tate Multimedia is excited to announce a partnership with renowned UK developer PlayTonic Games to unite celebrated platformer Yooka Laylee with its own marvelous marsupial Kao the Kangaroo in a free update available on PlayStation, Xbox, and Steam from today.

This brand new DLC will enable players to take on the entirety of Kao the Kangaroo as Yooka, whilst those on Steam will also be able to pick up a Yooka Laylee x Kao the Kangaroo bundle, enabling them to play both games for 20% less than their standard combined RRP. Indeed, gamers who already own one of the two titles will also be able to buy the second with 20% off the RRP.

“This is a significant moment for platforming fans,” says Magda Schwarzer, Head of Marketing at Tate Multimedia.

“Yooka Laylee rightly one praise and plaudits from critics and gamers alike when it made its debut in 2017 because it took the spirit of 3D platformers of old and brought it into the present day. It’s a joy to be able to unite a modern classic like this with our very own Kao, who has been on a very similar journey from old to new. We think players are going to love it.”

The launch of this new DLC comes just weeks after the previous update – Dubbed “Oh! Well” – added five new playable Eternal Wells to conquer and five scary skins to unlock, serving as the perfect way to give yourself a scare just in time for Halloween.

Both the free Yooka Laylee update on PlayStation, Xbox, and Steam, and the Yooka Laylee x Kao the Kangaroo bundle on Steam launch today.