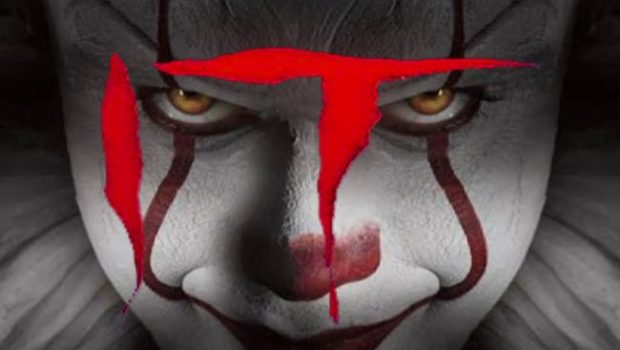 Fear is a deeply personal and powerful emotion that morphs the person to whom it clings. Based on Stephen King’s 1986 horror novel, It is a story of understanding and overcoming fear. Told through the eyes of adolescents, this horror-themed coming of age story was previously a two-part TV miniseries made in 1990. This film is the first instalment of a planned duology telling the story of “The Losers Club” and Pennywise the Clown.

On a rainy afternoon in the small American town of Derry, Bill Denbrough (Jaeden Lieberher) builds a waterproof paper sailing boat for his little brother Georgie (Jackson Robert Scott). After warning him to be careful in the wet weather, Georgie sets off to play with his new boat in the running rainwater. When his boat falls down a sewage drain, Georgie peers in to have his youthful gaze met by the eyes of a smiling clown. The clown introduces himself as Pennywise and entices Georgie to climb into the sewer and play with his new boat. The childish innocence of their conversation starts to turn when Georgie asks for his boat back and suffice to say, the young boy never makes it back home to his brother Bill.

One year later in the summer of 1989, the unexplained disappearances are rising in numbers all around the town. Within the farmland of Derry, adolescent worker Mike Hanlon (Chosen Jacobs from Cops and Robbers, 2017) struggles with the slaughter of livestock; his father enforces the belief that killing is for his own his own survival in the grown-up world. On the other side of town, it is the last day of school for “The Losers Club”. Bill and his friends, Richie Tozier (Finn Wolfhard, Stranger Things), Eddie Kaspbrak (Jack Dylan Grazer) and Stanley Uris (Wyatt Oleff), are bullied by Henry Bowers (Nicholas Hamilton, Captain Fantastic, 2016).

Across the school, awkward “New Guy” Ben Hanscom (Jeremy Ray Taylor, Ant-Man, 2015) is warned of the bully threat by social outcast Beverly Marsh (A Midsummer Night’s Dream, 2014). Upon returning home to their families, the adolescents’ personal struggles and fears are singularly revealed. Manifesting in waking nightmares, the kids must band together to understand their fears and why it is linked to Pennywise the Clown.

Director Andy Muschietti made a strong impact with the 2013 horror film Mama. His directorial debut successfully explored parental relationships within the gothic horror genre and impressed with a FX‑heavy conclusion. With It, Muschietti competently tackles parent/offspring relationships, but this time through the eyes of the children. The director keeps a tight rein on the film, despite the lengthy running time, and from the outset the love shown for the subject material is clear. The cinematography, courtesy of Chung-hoon Chung (Oldboy, 2003), is bathed in warm sunlight as the lens travels through the fictional town of Derry.

The audience is presented with a world in which everything seems fine on the surface, but darkness lies beneath in quite the literal sense. Wide shots and low angles bring a classic look to the film with obvious inspiration from 1980s classics such as E.T. (1982). The camerawork also keeps a strong focus on the youthful main characters and helps to enhance their heroic moments and family conflicts. The audience exists in their world, from their perspective. A few single-frame, steadicam shots early on adds to what is a beautifully immersive and visually dense film in both light and darkness.

Additionally, Benjamin Wallfisch (Hidden Figures, 2016) has composed a beautiful and haunting score for It. Keeping with the film’s nostalgic aesthetic, it is not without influence form the great John Williams. A great film score will be noticeable when necessary but it must also complement a scene without becoming a distraction. Wallfisch uses the string and horn section of his orchestra to confidently create a beautiful symbiotic work that complements the film. While the go-to guy in Hollywood for John Williams sound-alike scores is Michael Giacchino, Lucasfilm producer Kathleen Kennedy would be wise to take note of Wallfisch’s talent for future adventures in a galaxy far, far away.

While the original It still has many fans if not for nostalgic value only, there is no denying that the special effects featured in the television classic are now considered out of date. Likewise, one regular pitfall for horror directors is relying too heavily on special effects or overblown sound cues to create scares. Thankfully, Muschietti only uses the computer effects to heighten the scares when necessary, thereby aiding the escalation of danger as Bill and his friends venture further into their shared nightmare of tailored fears. A child in pain will often feel separated from their parents believing they don’t understand their view.

The screenwriters (and King of course) have used that isolation as a means for the children to bond and work together, which culminates in the impressively menacing special effects-driven finale. These effects never outweigh the importance of the characters and what they individually want to achieve. They are there to serve the story and enhance the “reality” of the horrors experienced by Bill and his friends.

The young cast do an exceptional job with their roles and all contribute to creating a memorable ensemble cast reminiscent of Stand by Me (the 1986 film, based on a Stephen King short story). Jeremy Ray Taylor and Sophia Lillis are the standouts—although the screenplay unfortunately leaves their relationship hanging like a loose thread. This will hopefully be touched on further in the next feature. Finn Wolfhard surprises after Stranger Things by proving his comedic acting abilities are competent and Jaeden Lieberher creates a believable performance to lead the film. The adult supporting characters are thin in character detail but strong enough in their performances to enhance and guide the motivation of the “trapped” adolescents.

If Stephen Bogaert’s unnerving performance as Mr. Marsh doesn’t have your skin crawling you should probably check your pulse. Bill Skarsgård is barely recognisable under the striking makeup and costume. His grinning performance is beautifully on point as he relishes in the macabre character and mystery of Pennywise the Clown. As Tim Curry was before him, Skarsgård’s Pennywise will be the face featured in more than a few nightmares of those too young to be watching a film of this subject matter and intensity.

It has been created with respect to the novel and a strong love for the legacy of these characters. Never feeling like a cheap attempt at cashing in, the film plays like a loved film from the 1980s yet also shocks and scares with the fully realised and darkly vicious visual horror that has come to be present in modern films of the genre.

Summary: It has been created with respect to the novel and a strong love for the legacy of these characters.