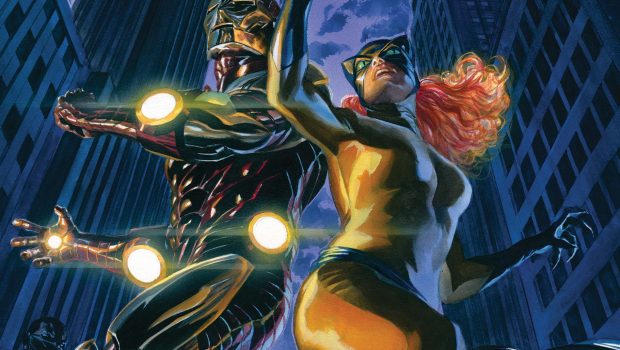 Summary: When Slott left the title I was very disappointed. Christopher Cantwell has put those fears to rest. Cantwell is obviously planning a long running story here.

Tony and Cat hit the sack, Korvac adds more to his deck.

The Story: Tony and Hellcat shack up as Tony starts to develop a team to bring down Korvac. Meanwhile, Rhodey is brainwashed.

Summary: Tony and Patsy commiserate about their current status quo, with Tony suffering from doubt and a load of injuries and Patsy’s HUGE facial scar and hearing of voices. Patsy reveals that that she likes the man Tony could be (and is some of the time) but she’s tired of what she calls his “subterfuge.” After some sex, she convinces him that he needs help to take down Korvac and rescue Rhodey. He goes to recruit the street racer Halycon we saw earlier in the run, who turns out to be a mutant.

While all that is going on, Korvac has The Controller use numerous control discs on Rhodey, who is proving to be surprisingly resilient. Korvac then absorbs the energy that was stored in the lightning batteries from a few issues earlier… which is A LOT of power.

Writing – Cantwell is obviously planning a long running story here. We’re four issues in and we haven’t even gotten to the “team forms to stop threat” part. At first when Slott left the title I was very disappointed. After all, he had put a decade in on Amazing Spider-man and I was very ready to invest in a decade long Slott run on Iron Man. Christopher Cantwell has put those fears to rest. He has a very solid grasp on a man who has just come back from the dead again (well, sort of. He was already alive, but he was metaphorically dead because he thought… you know what? Go read Iron Man 2099).

I’ve never really been a fan of Korvac. When I was younger, he just looked like a giant purple dude in a square wheelchair that just so happened to kill the Avenger’s and then brought them all back to life. For the first time since then, Korvac seems like an actual cosmic threat.

As for Hellcat, I first encountered Patsy Walker in Avengers Vol. 3 issues 10-11. He was briefly resurrected and after the issue, I dug through the back issues looking for more info on her. What I found ever really excited me. She had powers and then she didn’t. She was crazy , but not really. She was considered a joke until she wasn’t. It wasn’t until her debut in the MCU that she managed to become popular, but in comics she was still considered a liability. To see her actually get her due as a competent hero is really satisfying.

OH, and kudos for using Blizzard. He was always my favorite Iron Man villain, both in comics and in the 1990’s cartoon.

Artwork – Alex Ross truly does make a hell of an Iron Man Armor. While it’s not seen in the actual issue, the cover features it and it looks absolutely gorgeous.  The muted red and golds give a great contrast to the bright “search lights” on the suit. The inner art continues the same trend as the previous ones. It’s kind of like a depressed person’s view of the world (sort of like Tony’s crisis).

Final Thoughts? – Tony’s troubles are just starting. Between Hellcat’s facial and mental problems, Rhodey’s subjugation, Korvac’s power boost and Tony’s bout of depression, we have just started on a long adventure. He may be a man of iron, but he’s still just a man.