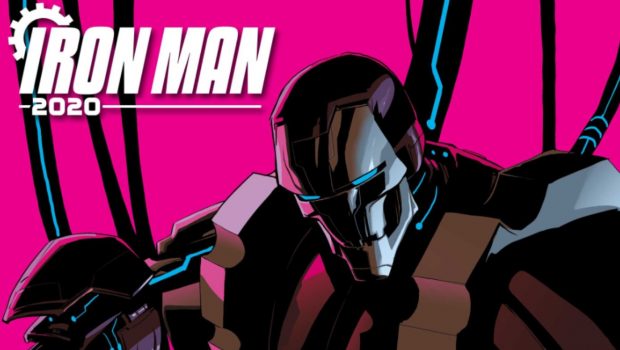 n 1984, the Iron Man of 2020 visited from the future in MACHINE MAN #2. Now, decades later, that future has arrived! Just announced at the Marvel Comics: Next Big Thing Panel at New York Comic-Con, IRON MAN 2020 kicks off in January and begins an event that will redefine one of Marvel’s most iconic heroes!

Recent teasers have hinted at the tragic fate of Tony Stark, and now readers will see his long-lost brother, Arno Stark, take over as Iron Man. How he tackles the responsibilities that come with being the armored Avenger will have monumental effects on the Marvel Universe. Dan Slott and Christos Gage, a superstar duo of longtime Marvel writers, have crafted an Iron Man saga for the ages, and with art by the incomparable Pete Woods, this is an event that was worth waiting decades for!

“Like the inexorable turning of pages on a calendar, we’ve been building up to the arrival of 2020 and the advent of Arno Stark as Iron Man ever since this latest run began,” says Executive Editor Tom Brevoort. “Here, all of the larger themes we’ve been playing with will come to the fore in a big, sweeping, epic action movie that anyone can enjoy!”

This 6-issue series will also continue to raise thought-provoking questions about what it means to be an artificial intelligence. As the story unfolds, expect to see your favorite Marvel robotic characters from Vision and Jocasta to Albert and Elsie-Dee in what’s shaping up to be a true “Robot Revolution.” Also keep an eye out for upcoming announcements about the exciting tie-ins that will accompany this epic event featuring some of your favorite armored characters!

IT’S A NEW IRON MAN FOR A NEW YEAR!

The future is now! Artificial Intelligences present a clear and present danger to humanity and must be brought to heel!

The Robot Rebellion battles for the establishment of robot rights!

And Arno Stark IS Iron Man!