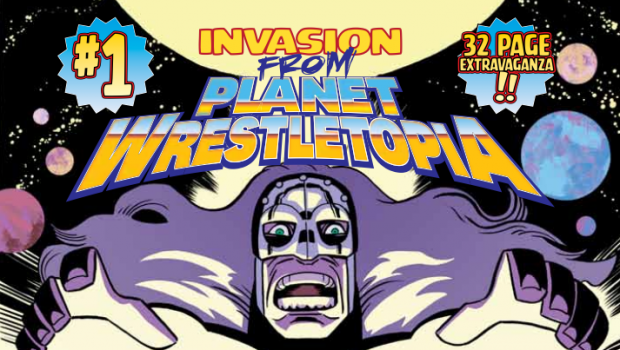 Summary: It's a little absurd and a whole lot of weird.

When Rory Landell, a.k.a Rock ‘N’ Roll Rory, a professional wrestler declares himself “Galactic Champion of the Universe”, the planet of Wrestletopia sees it as a declaration of war! 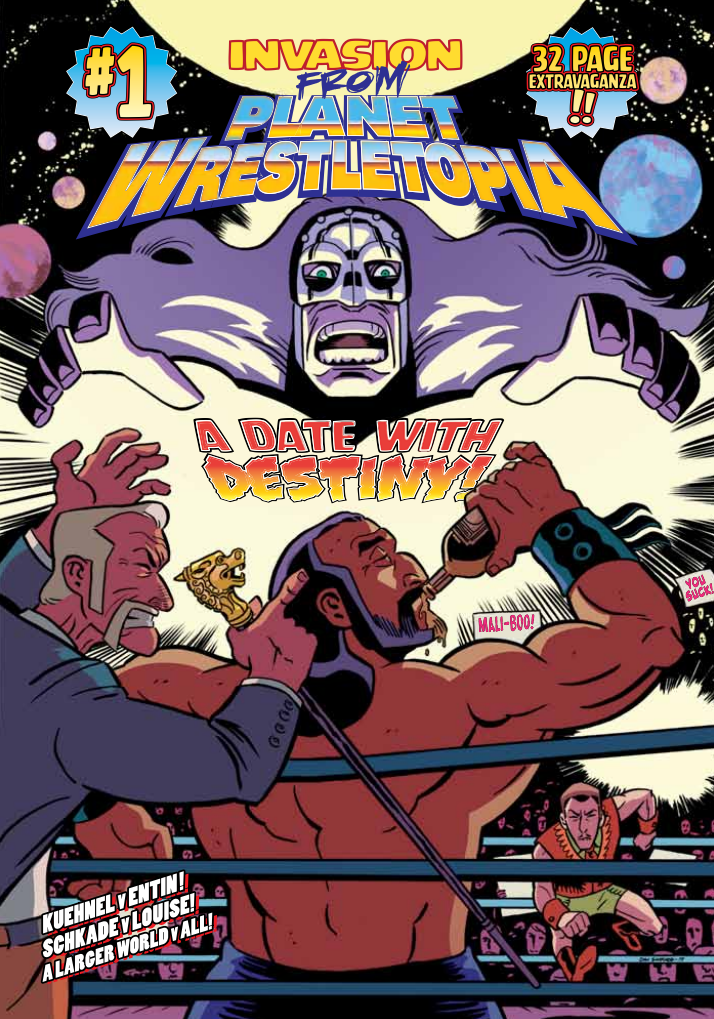 Invasion from Planet Wrestletopia #1 begins in deep space in the year 1999, where a signal from Earth is picked up by Wrestletopian Command, which is interpreted as an act of war. We then jump back fifteen-years, where we see Rory Landell, a young and ambitious professional wrestler who is rehearsing his championship winning speech in front of the mirror. He is interrupted by another wrestler, who relays the message that the promoter, Mr. Drasin, wants a word with him. Drasin informs Rory that there is to be a change of program, with his opponent winning the championship belt instead of him. Angry and frustrated, Rory argues with Drasin, and when he is handed his new speech, abruptly storms off. Rory’s manager, Don, tries to reason with him, giving him a word of advice about his behaviour and attitude towards Drasin. He advises him to put his head down, eat humble pie and do as Drasin asks. However, later that night, we see Rory being interviewed, where he declares himself the “Galactic Champion of the Universe” in a smug and arrogant display of self-gratification. We then jump back to the year 1999, where we see a much older and washed-up looking Rory, trying hard to make a buck wrestling. He is still stubborn, bull-headed and arrogant, with his wrestling acts looking more like scripted comedy routines than those that belong in professional arena. Meanwhile, back on planet Wrestletopia, news of Rory’s declaration of being the galactic champion has just reached them, which is seen as an act of war, as there can only be one galactic champion! 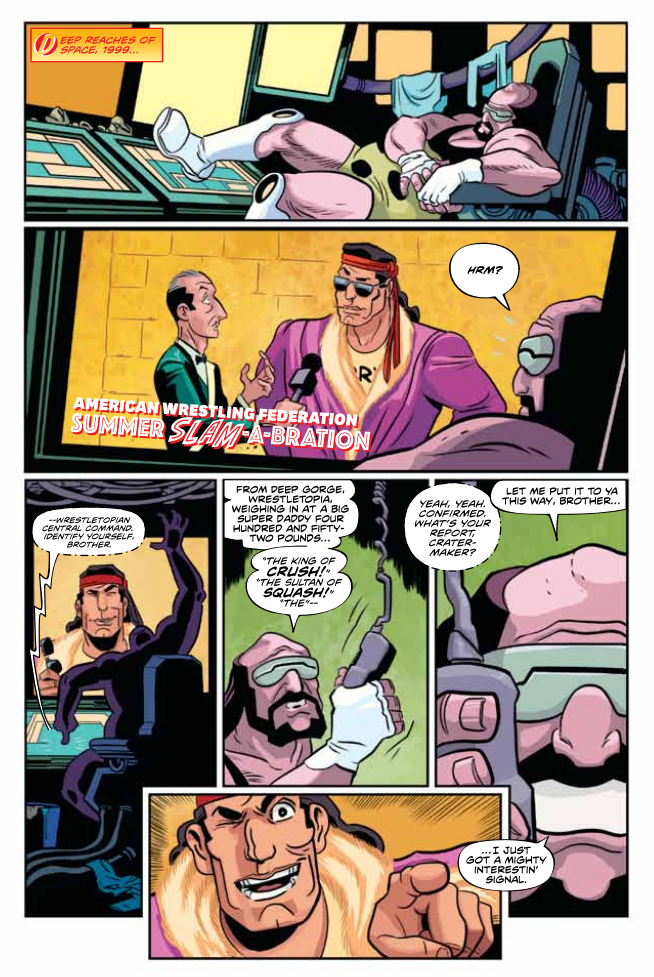 OK, I’m going to admit something here; I know NOTHING about wrestling. Where I grew up in Sydney, there isn’t really a culture of pro wrestling, so in saying that, I came into this issue a little sceptical about whether I would like it. I thought the concept sounded interesting enough, so I thought I’d give it a go. I’m happy to say that I was pleasantly surprised, finding this first issue to be an entertaining and light-hearted introduction to this series. The main protagonist, Rory, is an embittered, egotistical jerk. It appears like nothing has really worked out for Rory, and whether that’s because of his bad attitude, or just plain bad luck, I’m not entirely sure. He does, however, treat those around him like dirt, including his manager, Don. I found their relationship to be an interesting one, and their back-and-forth banter to be funny and entertaining. I’m curious to see what kind of character development we’ll see with Rory, as flawed characters like this always grow and mature…well, hopefully.

What I’m also looking forward to seeing more of is the Wrestletopians. Wrestling is ingrained within their society and culture, and grand sweeping statements like the one Rory made, are taken very seriously. I found the whole idea of a planet dedicated to wrestling to be funny, making me laugh at the absurd idea of it. For someone who doesn’t like wrestling, I was pleasantly surprised how easy it was to become swept up in the light-hearted and entertaining tone of the story. 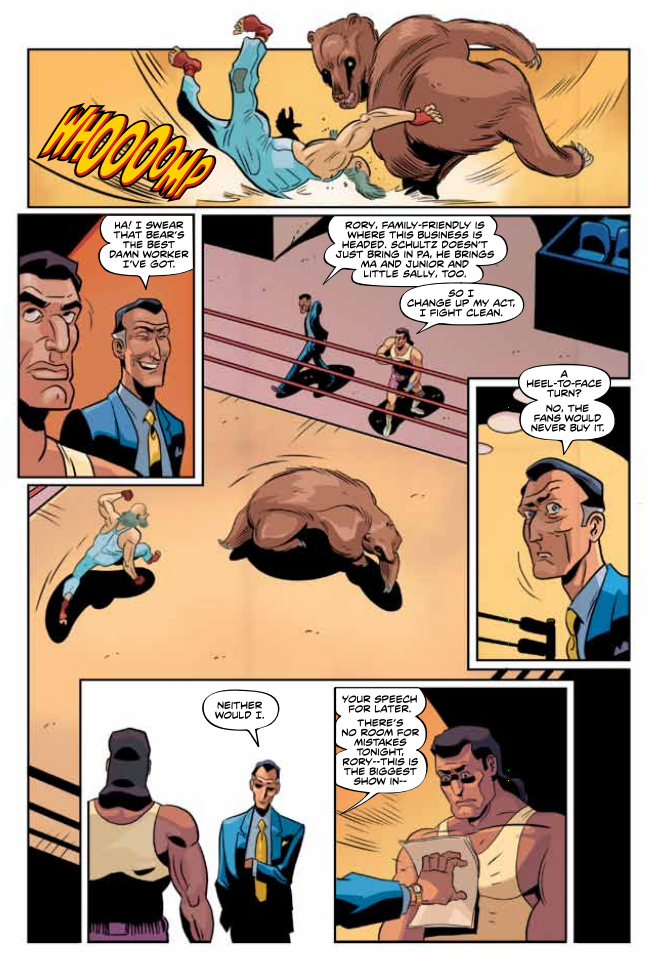 Don Schkade’s art has a lovely animated quality about it, which perfectly captures the humorous tone of the story. I rather liked seeing the exaggerated features, and angular jawlines of the wrestlers, finding them to be a parody of what we’d expect pro wrestlers to look like. With a comic based around wrestling, it’s really important for the artist to be able to convey a believable sense movement on the page, and I found that Schkade easily does this, making the wrestlers look like they are moving in a fluid and kinetic way. I also like how the art doesn’t take itself too seriously, with Schkade never shying away from drawing some funny and laugh-out-loud moments, there is a wrestling match between Rory and a dwarf that comes to mind. The colouring, by Marissa Louise, is both vibrant and bright, and brings an even livelier quality to the already energetic art. I enjoyed seeing the vivid colour palette, and found that it worked really well in heightening the overall art. 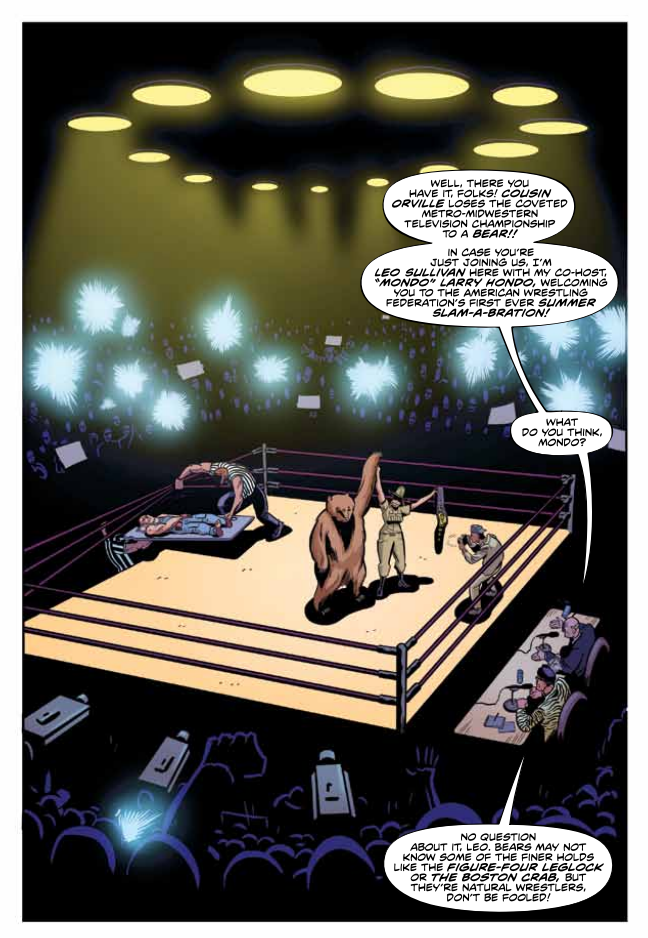 Overall, I found Invasion from Planet Wrestletopia #1 to be a funny, engaging and a somewhat bizarre introduction to this story. Whether you’re into wrestling or not, give this series a go for it’s light-hearted and whimsical narrative. It’s a little absurd and a whole lot of weird, but there ain’t nothing wrong with that.