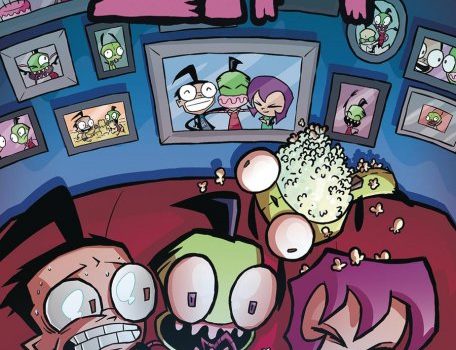 Summary: This book was a delight to read start to finish.

Invader Zim #37 can be described easily in one word: fun.  This book was a delight to read start to finish.  While it is clearly aimed at a younger demographic, it is engaging enough for anyone to get into.

This issue features two covers, a standard and a variant.  The standard cover features Dib, Zim, and Gaz sitting on the couch.  Zim is having a blast playing video games with Gaz, while Dib sits beside them trembling in fear.  On the wall in the background are numerous family pictures, with one in the center featuring the three as happy siblings smiling together.  It does a great job representing what happens in the book.  Warren Wucinick and Fred Stresing created a great first impression for this book.

The variant features Zim tip toeing across the dangerous looking teeth of a many-eyed alien.  It has nothing to do with what is found within the book, but is still fun.  Fred C. Stresing has created a great cover that looks like it came right out of a scene from the opening credits of a cartoon.

Kate Sherron handles the interior art for this issue.  It is a good-looking book, with the characters beautifully rendered.  Zim and GIR look great, with GIR looking especially creepy, but in a good way.  The colour work makes the issue pop, making the characters almost seem like they’re moving.  I really like how Zim is drawn throughout this issue, he looks like the over-eager villain, and his facial expressions alone tip off the reader that Dib is caught somewhere he does not want to be.  The art definitely supports the story, and it looks and feels just like an episode of the show.

This issue is written by Sam Logan, and makes for a delightful read.  The characters are all true to the animated series, and the way they are written blends perfectly with the art.

The book begins with Dib waking up in the morning, being greeted by the smiling face of his ‘brother’, Zim.  Dib is immediately suspicious, and demands to know what plot Zim has unleashed on him.  As the issue continues Dib becomes more and more unhinged, as every character and family member doesn’t seem to be aware that Zim is an alien bent on conquest.  Instead they question why he’s being mean to his brother, or advise him he’s been watching too many conspiracy videos.

Dib eventually manages to break Zim’s hold on him, and Zim is incredulous that his plan failed.  The final pages of the story are really fun, and I won’t spoil them here.

Invader Zim #37 is a solid issue.  The story is fun, and the art looks great, matching the style of the animated series.  I enjoyed Zim’s plot, and when Dib finally breaks free, the ending is a great payoff for the whole issue.  The portrayal of Zim as Dib’s brother throughout the issue is played up for maximum laughs, and it was quite enjoyable how the art and the writing worked together to pull off the various jokes.

This is a great book for all ages, and a younger demographic will definitely have a lot of fun with it.  The jokes are well thought out and accessible, and the issue progresses as logically as a book about a megalomaniac alien can.

All told this was quite an enjoyable read, and if you are a fan of Invader Zim this is a must buy. If you’re not but are looking for a good clean book or something to enjoy for kids, this issue is for you!  4 out of 5 stars. 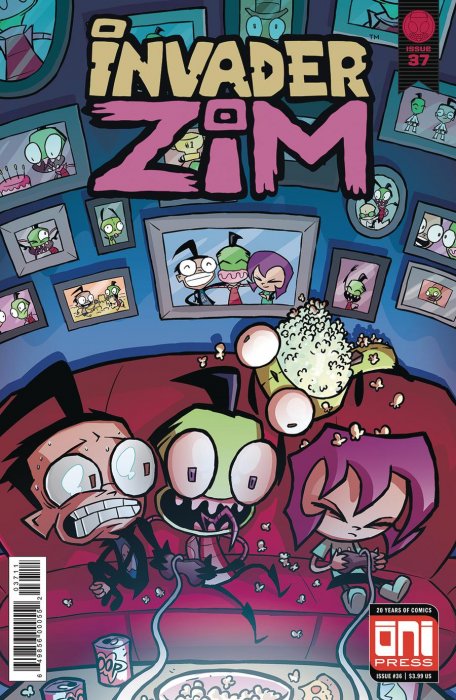