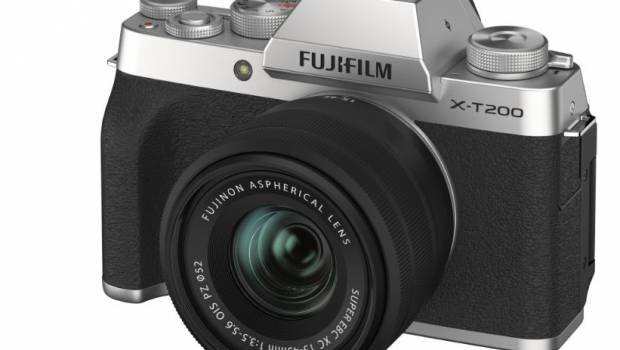 The FUJIFILM X-T200 gives all creatives the chance to enjoy professional level features. Content creators of all levels can make the most of this new lightweight and compact mirrorless camera body that features a newly designed EVF, quick face detection AF, the ability to create 24.2MP stills at 8 FPS, and record 4K UHD video.

The camera has a new sensor and processor combination that provides great performance and features, alongside a bright, large widescreen LCD vari-angle touchscreen, which gives users familiar and intuitive controls similar to a smartphone. The camera also offers wide dynamic range video by using the “HDR  movie mode” and the X-T200 is also capable of recording 4K30p and Full-HD 120p video. Additionally, the new “Digital Gimbal” can be used to smoothly record video by controlling the camera shake with the newly equipped gyro sensors. The X-T200 is an ideal camera for creative individuals who want to make high-quality videos and images easily and not be frustrated by the technology making them.

Incredible Image Quality for any Situation

X-T200 combines innovation, design, and technology to provide image makers of all levels with a complete solution to unlock limitless creative possibilities. Weighing 370g, the X-T200 is about 80g lighter than its predecessor and is equipped with a new vari-angle touch-screen, a high-speed APS-C 24.2 Megapixel CMOS sensor with copper wiring for better performance, and an intuitive user interface that provides professional quality with the ease and familiarity of a smartphone. It is able to process data 3.5 times faster than the X-T100, reducing the rolling shutter. AF performance in X-T200 is also dramatically enhanced through the use of phase detection autofocus pixels across the sensor.

Touch Your Way to the Perfect Image

X-T200 is equipped with a vari-angle 3.5-inch, 16:9 Aspect Ratio widescreen LCD touchscreen that can be opened and closed between 0 to 180 degrees and rotated between -90 to +180 degrees. It also provides an intuitive and responsive control over the camera’s features and functionality and can be used to adjust a variety of settings, like brightness, background blur, Film Simulation effects, and image aspect ratios.

Focus on the Faces and the Moment

The use of on-sensor phase detection pixels across the sensor and an improved AF algorithm means focus can be achieved quickly and in a variety of conditions. The updated Face/ Eye Detection AF makes focusing on individuals or groups of people quick and easy. This is even possible when the camera’s LCD monitor is flipped out and users want to take a selfie. Automated functions allow the camera to be set to recognise and track a main subject within the frame. Combined with a burst mode of 8fps, important moments with the right people will surely be easier to frame, focus, and immortalise.

Fujifilm’s history in colour science has given it world renowned status among image-makers across the world. During its 85 years in the industry, it has been responsible for some of the most iconic photographic films in history and this exceptional knowledge has been poured into the 11 digital Film Simulation modes installed into X-T200. Images made with these film simulations carry the look and feel of the actual films that inspired them, sparking creative imaging making. In addition, 20 Advanced Filters, which includes the new Clarity Filter, give even more creative possibilities to image-makers as they seek to express themselves artistically.

The new Digital Gimbal mode and HDR movie modes, along with its basic internal editing functions, helps X-T200 do more than just produce beautiful 4K Video. These modes ensure that videos are stable, crisp, and properly trimmed so they can be easily shared with family and friends. A gyro sensor sits at the heart of the new Digital Gimbal mode and assists in reducing the effects of camera shake when recording video footage. The new HDR movie mode makes recording footage in high contrast situations much easier and more practical, while its in-camera video editing functions allow for clips to be trimmed and correctly sized before they are shared. This means creators can share the perfect section of a slow motion clip or the best part of their 4K footage right from the camera to their smartphone without ever needing to use a computer!

Pick Your Favourite Colour and add a Fast Prime Lens