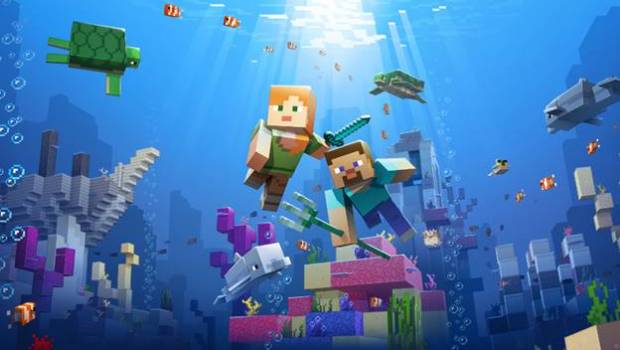 Beginning April 4, Xbox Game Pass members can join the Minecraft community of millions of players from around the world. Discover limitless ways to play and create anything you can imagine. Plus, with Minecraft´s free content updates, you´ll always find new environments to explore, tools to create, and mobs to meet. Last summer, the Update Aquatic filled Minecraft´s oceans with dolphins, turtles and more, and the upcoming Village & Pillage update will expand the game even further later this spring. With over 100 great games, including Minecraft, there´s never been a better time to be an Xbox Game Pass member and discover your next favourite game. If you haven’t tried Xbox Game Pass, join today and get your first month for $1.

Halo: The Master Chief Collection is Coming to PC and Adding Halo: Reach

On today’s show, the crew was joined by Brian Jarrard from 343 Industries, who shared a couple of pieces of exciting news. First, we announced that Halo: The Master Chief Collection is officially coming to PC! Built specifically for the PC audience, players will be able to experience generation-defining campaigns and iconic multiplayer modes, many for the first time, on Microsoft Store and Steam. On PC, titles within Halo: The Master Chief Collection will be released individually over time to ensure that we are partnering with the community and investing the time into development to create a premier PC experience. We’ll have more to share during the Halo Championship Series Invitational at SXSW on March 15-17. We also announced that we’re bringing Halo: Reach to Halo: The Master Chief Collection for Xbox One and PC! Players will be able to experience this legendary title in stunning 4K/60fps and we’ll have more to share in the future.

At Xbox, planning for E3 2019 has kicked into high gear and we couldn’t be more excited for what we have in store for our fans.  As you may have heard, Bonnie Ross head of 343i, recently confirmed we’ll learn more about Halo Infinite at the show.  Our community team is hard at work getting ready for the return of Xbox FanFest, one of our favourite events at E3.  And we’re stoked to announce that in collaboration with AEG and L.A. Live, Microsoft Square will soon be renamed Xbox Plaza and will be a big part of what we have in store for E3 in June.  Cool, right?  We’ll have more to share on how Xbox Plaza is shaping up, all things FanFest and so much more goodness on E3 2019 in coming weeks and months ahead so be sure to stay tuned to Xbox Wire, This Week on Xbox and Inside Xbox for all the latest info.

State of Decay 2 Lets You Choose Your Own Apocalypse

During today’s Inside Xbox segment, we revealed more about the two all-new terrifyingly awesome difficulty levels coming to State of Decay 2 with the free Choose Your Own Apocalypse Update (that we mentioned late last year) coming to Xbox Game Pass members and current players starting on March 26. Dread Zones will offer exciting challenges for experienced players, such as deadlier zombies, plague-infected juggernauts, a faster-acting blood plague, and fewer resources to scavenge. Want the ultimate challenge? Nightmare Zones are grueling endurance tests for hardcore players, featuring wandering groups of freaks and hostile humans capable of scoring lethal headshots against your survivors.

A Closer Look at the Future with Project xCloud

On today’s episode of Inside Xbox, we gave viewers their first real look at Project xCloud, a vision for game-streaming technology that will complement our console hardware and give gamers more choice in how and where they play. We’re developing Project xCloud not as a replacement for the video game console, but as a way to provide the same choice and versatility that lovers of music and movies enjoy today. We’re adding more ways to play Xbox games. We’re excited to share more about the technology in the coming months, including the first details of how and when you can help us to test it in real-world scenarios later this year.

Spatial Sound and the Wireless Display App are Changing the Game

As you might have heard, Xbox One currently supports Spatial Sound that’s specifically mixed for Dolby Atmos. During today’s show, we announced that the team is working to bring Spatial Sound to your whole Xbox One experience, regardless of whether it was specifically mixed for it. That includes all your games, movies, TV shows, and music content. Think as it as up-scaling for sound. To put it in simplest term: In the near future, all the content you experience through Xbox One is going to sound like it’s been mixed for Spatial Sound. We also announced that the team is in the process right now of rolling out the Wireless Display app, which is available in the Microsoft Store today. This app lets you project from your desktop or laptop PC or even your tablet onto the biggest and best screen in the house. Go check it out now!

Bohemia Interactive’s DayZ has been a big hit on Xbox Game Preview, so we were happy to share on today’s episode that this intense RPG shooter will be coming out of XGP on March 27. Yes, you and your friends will be able to take on zombie hordes, as well as other players, in an attempt to stay alive. You’ll need to scavenge the world for weapons, food, water, weapons, and medicine, dealing with both zombies and competing players as you try to survive the outbreak. It’s one of the most intense experiences on Xbox One, and we’re excited for the full version to be released.