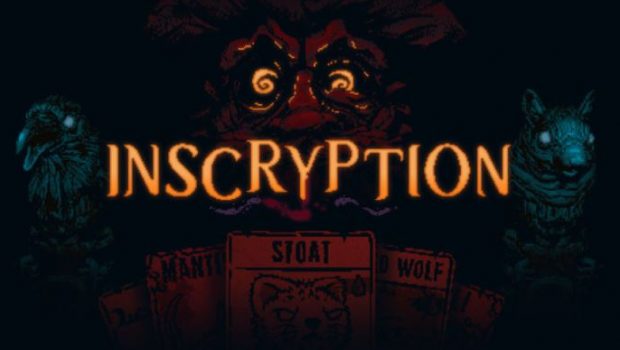 Summary: The creepiest hand of cards you'll ever play, and one of the best pieces of interactive fiction I've seen in years.

Daniel Mullins has a reputation for making games that are far more than they seem. Inscryption is no different.  As the first of his games to come to the Switch, you owe it to yourself to check out, what is by far one of the best games of the year.

Presented as a long-lost digital version of a defunct collectable card game, with some serious Jumanji vibes. Inscryption loads with a grainy cry filter and a click and whir, as the beaten-up 3.5-inch floppy the game is contained on springs to life. 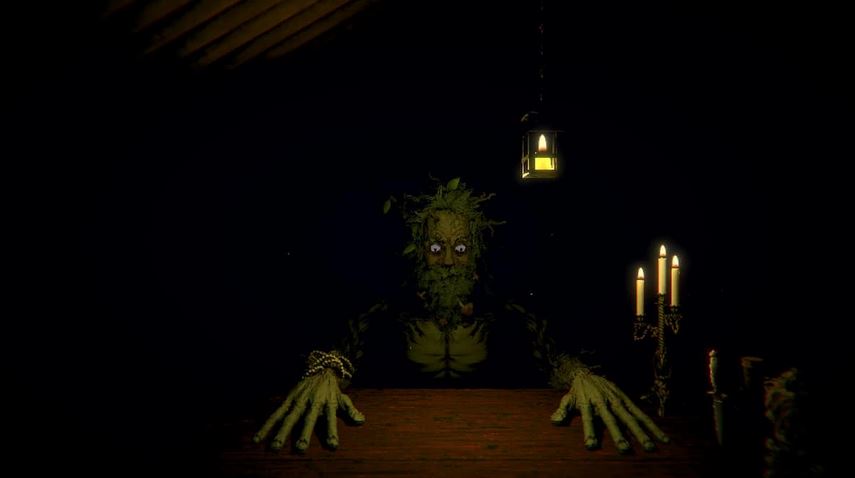 After clicking continue, as of you’re playing someone else’s save game, you awake to find yourself trapped in a cabin sat across from a Psycho that wants to play a very high-stakes game of cards with you. The rules are simple; you beat him, and you can leave. You lose, you die and become part of his ‘collection.’

An unsettling slow-burn horror, Inscryption is the kind of game that gets under your skin. At its core, it’s a deck-building card game crossed with a rogue-like. Although, these two genres might sound antithetical. It works really well. As each new run introduces new cards, new rules, and new ways to strengthen your deck as you desperately try to find a way to escape from the dire situation you find yourself in. 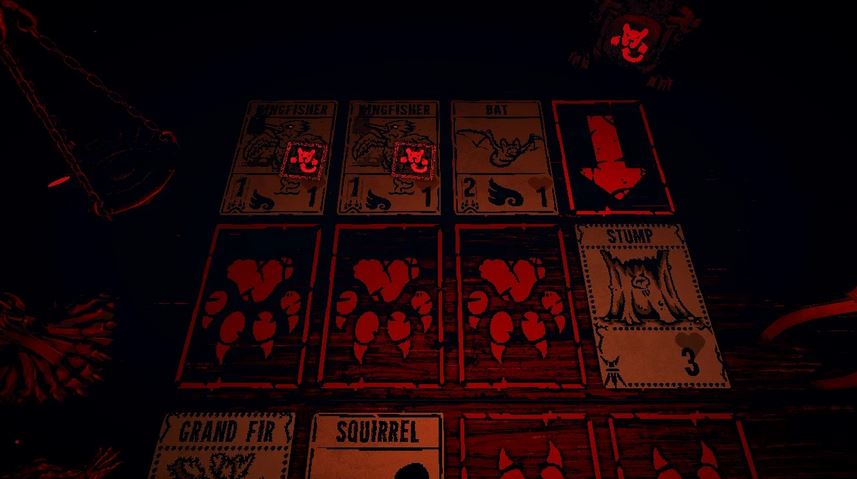 It also helps that at its most basic level Inscryption is a really great card game with a surprising amount of depth, even if the ultimate aim of the metagame is to find a good way to break it.

What initially seems to be a simple game about a guy at the whim of a weird serial killer with his own warped version of Yu-Gi-Oh and a flair for the dramatic evolves into so much more.

It’s impossible not to get sucked into the deck-building and battling as the primary deck-building and battling loop is incredibly engaging, as the game progresses, so too does the card game within it, as new cards, rues and mechanics are introduced and a steady pace. Its also impossible not to get attached to recurring cards in your deck, and after a while, it feels like they take on a life of their own, and that the cards are almost talking to you.

While managing your ever-expanding collection of squirrels, stoats, wolves, and Elk is an absorbing experience, as you figure out new card combos and deck strategies, as well as the best time to use additional power-ups and your best path forward on the gameboard that presents your character’s journey between rounds.

There’s also a slew of fantastic boss battles to take part in that shake up the rules and provide a real challenge, as they need to be beaten over two rounds, instead of the usual one. You’ll have your cards stolen, turned into objects, and even your dead critters come back to haunt you.

These frequent changes, as well as opportunities to customise, and power up your existing deck and add additional tules to entire classes of cards,  help you not only craft a deck that favours your particular playstyle but also ensures that the action at the card table never gets old. 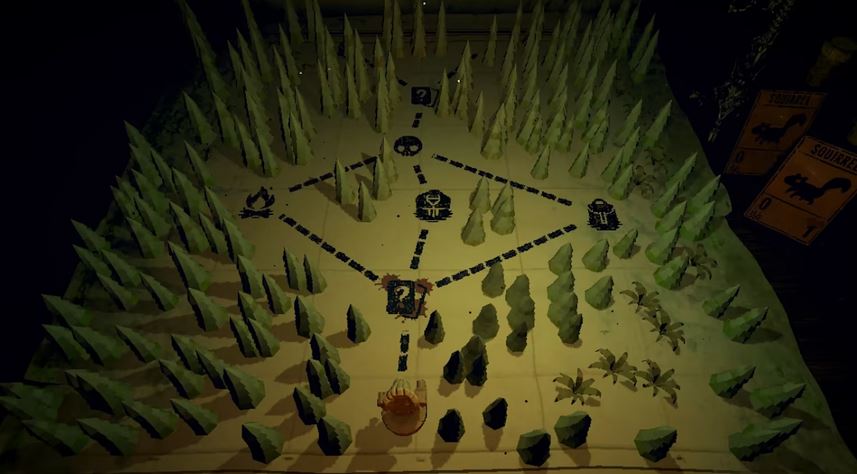 The only issue I have had with Inscryption is the process of trying to appraise it without ruining anything. And even with this mere suggestion, I feel like I have said far too much. Anyone who has played any of Mullin’s previous games will be aware of his penchant for toying with player expectations and genre conventions, and Inscryption proudly carries on that tradition. It’s very much a wheels within-wheels kind of affair, and the metagame is easily one of the most expertly crafted I have ever seen. To the point where after a while you’re wondering who is playing who. There was a moment where It seemed I was completely stuck, that maybe the game had bugged out in some way. I tried everything else I could think of before I gave up, quit, and clicked new game on the main menu. Let’s just say sometimes it pays to start again.

The only slight disappointment I had with the game is that in handheld mode on Switch, there are no touch controls. It’s only a minor thing and more my own personal preference than a knock on what is for the best part a very tight, expertly crafted, incredibly imaginative game.

The most compelling thing about Inscryption though, is how it explores people’s relationships with the games we play and the effect that they can have on us. By mixing not only genres, but different types of play, Mullins reveals not only the commonality of certain game types, what are escape rooms and trading card games but a series of puzzles presented in different ways, but how these different forms of play can become all-consuming pursuits. 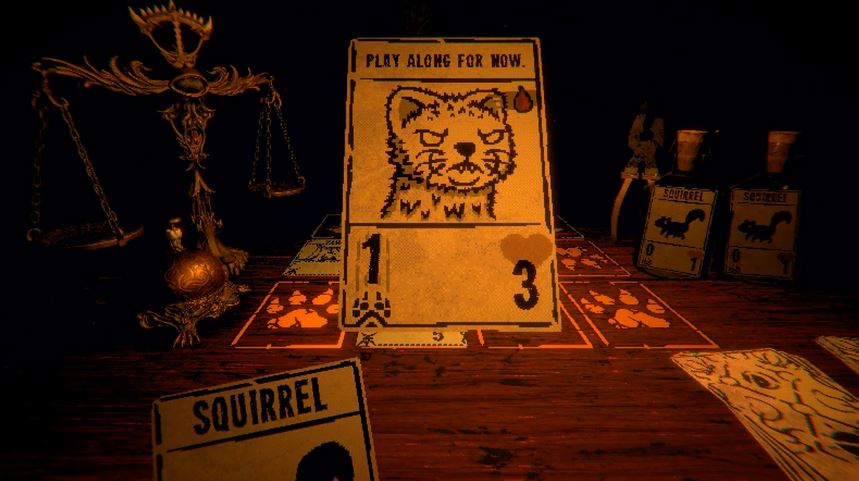 Meanwhile, the narrative is the kind that could only be effectively told by using the medium of video games. It’s an insidious and haunting experience that will plague your thoughts, and leave you almost as obsessed as its creepy antagonist, long after the credits roll.

The biggest issue I have had with Inscryption is talking about it without spoiling it and I feel like I’ve already said far too much. If you have a Switch, (or the means to play it on any console for that matter), a love of puzzles, and want to see what the medium of games is really capable of as a narrative form, Inscription is one rabbit hole well worth jumping down.