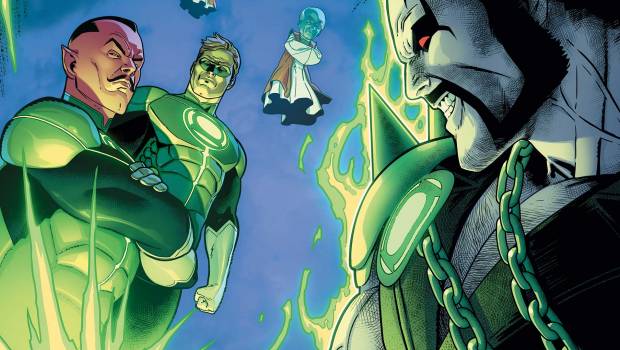 Before we get into the review for Injustice 2 #32, let’s talk about the formula that writer Tom Taylor uses in this alternate DC Universe… 3X2(9YZ)4A(Hal Jordan = Green Lantern Again)(Sinestro = Green Lantern Again)(LOBO=GREEN LANTERN=WTF) … yep, welcome back to the latest, strangest and coolest issue of Injustice 2 as Taylor continues throwing the unexpected at the reader. In the previous issue, a new Red Lantern named Starro the Conquerer had just thrown a massive spanner into the works and as a result, Atrocitus has finally gotten revenge on the Green Lanterns as their numbers start falling with their planet OA about to fall.

So when desperate times call for desperate measures, Hal Jordan who is atoning for his sins in the original Injustice series has been reinstated as a Green Lantern, including his once mentor enemy Sinestro and of course, the Main Man himself Lobo. So when Lobo literally kicks Atrocitus’ cat Dex-Starr into another galaxy, he turns his attention to the leader of the Red Lantern Corps and creates some obscene and depraved constructs to kick his butt. Elsewhere Hal and Sinestro are attempting to free the Starro controlled Green Lanterns and more concerning, Sayd one of the guardians who is also “possessed” by the conqueror threatens the future of the Corps.

The issue also returns to Booster Gold and Blue Beetle who are chasing Starro back to Earth as this alien starfish wants revenge on this planet for defeating it. However they learn that something is interfering with the timeline which is this issues biggest mystery. We also discover that Hal has lost his willpower but is given a pep talk by his imaginary and deceased friend Guy Gardner as he rallies the other Green Lanterns to work with him in order to free Sayd from Starro’s control. As this occurs, Sinestro is trying to free his daughter from the control of Starro and although he frees her from its influence, he is unwittingly killed by her in the process. The issue ends with the Titans chasing one of the Red Lanterns who attacked Starfire and in pure cliffhanger fashion, he is killed by one of the Braniacs many legions.

Injustice 2 #32 was another thoroughly enjoyable read from Tom Taylor who adds some powerful emotion into the story such as the scene with Hal and Sinestro where his former mentor tells him that he was his best student or to the final scene between Sinestro and his daughter. So even though there is all this action happening in the background, it’s filled with these emotional gems and world building which is where Taylor succeeds. Then you have the amazing art of Bruno Redondo who is unfortunately leaving Injustice 2 and he adds to the emotion of the story plus that blockbuster feel with all the dynamic panels and flawless action. My favourite page is seeing the Guardian Sayd freed from Starro’s influence with a close second being the final page as we see Brainiac’s ship and his army. Bruno, you’ll he missed mate!

Once again Injustice 2 is my favourite comic of the week and gets 5 out 5! 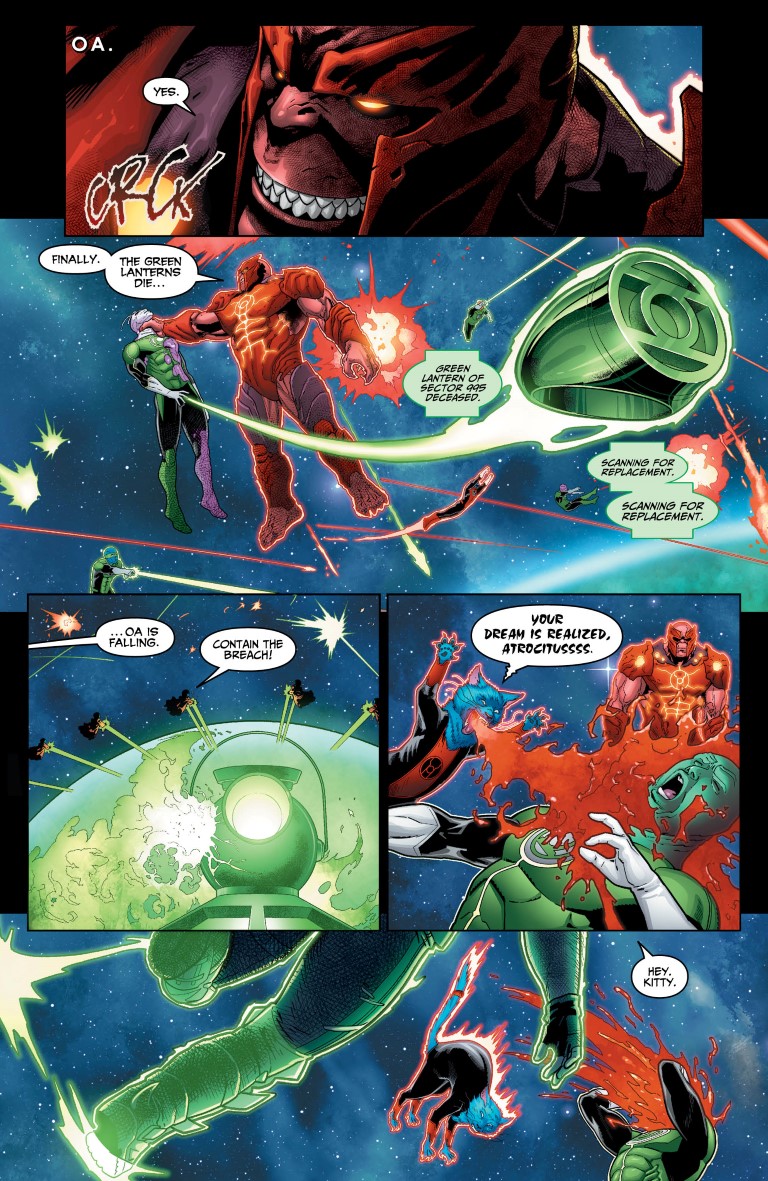 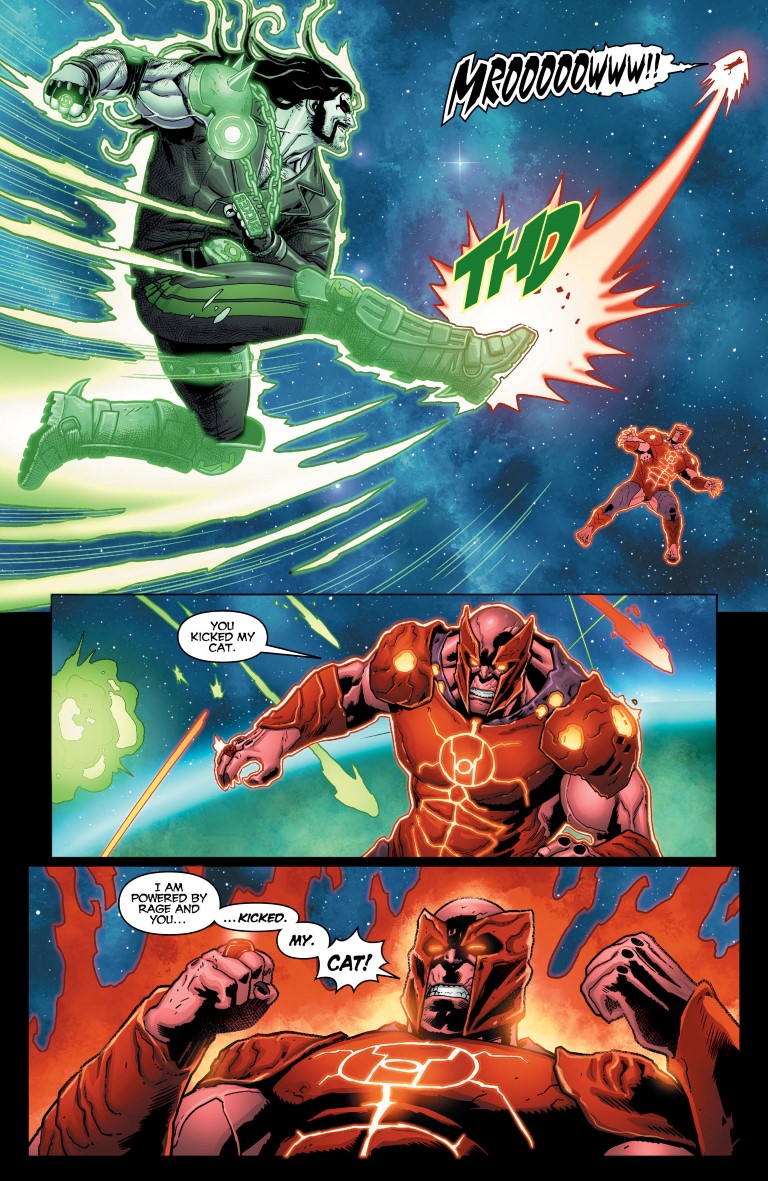 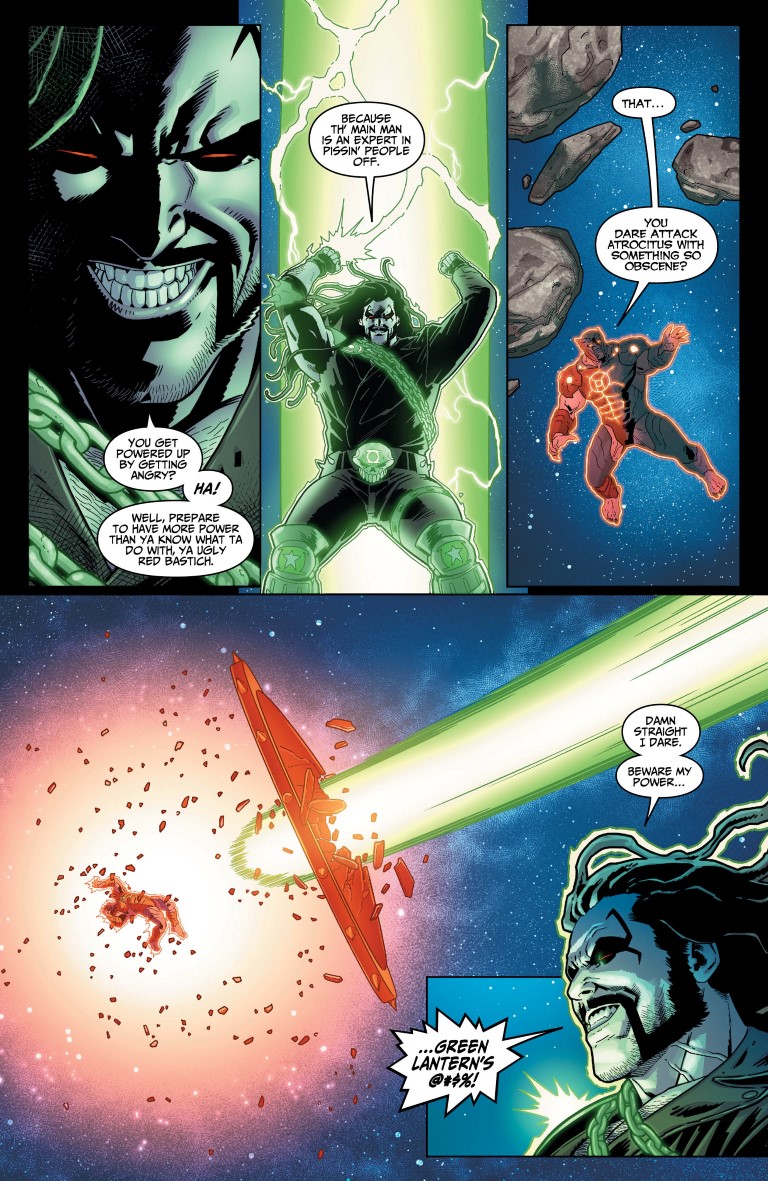 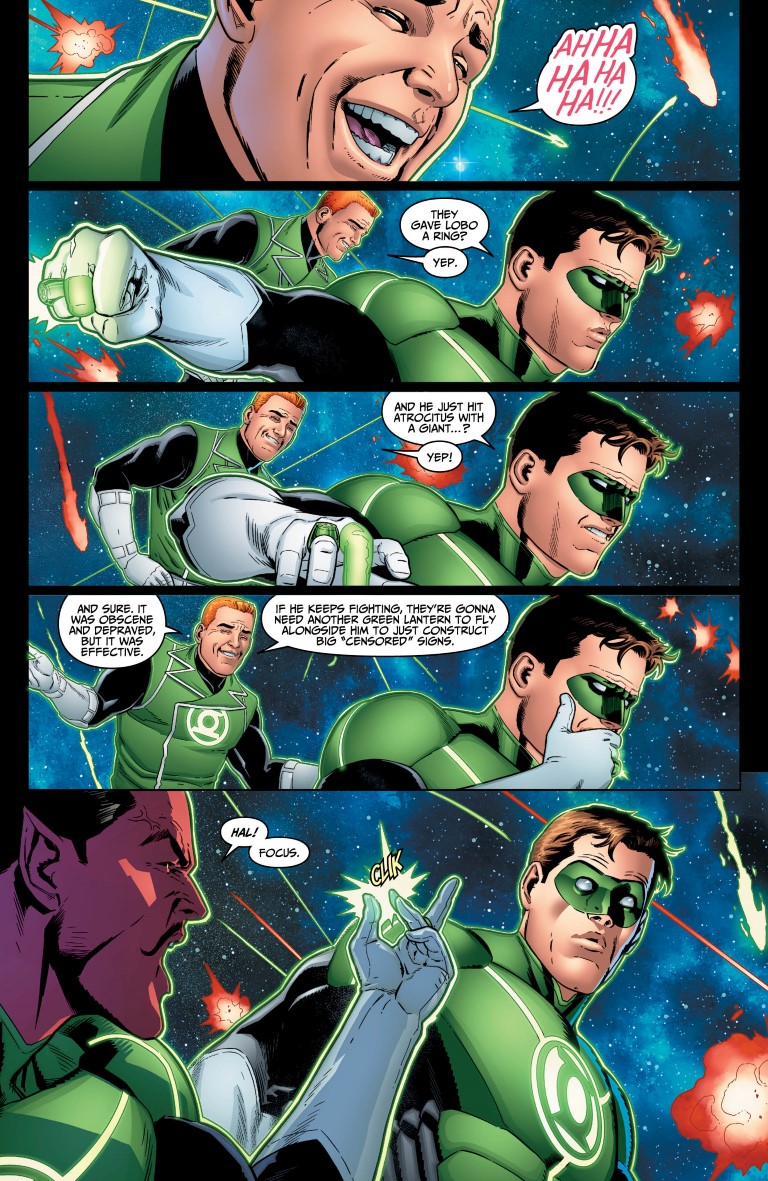 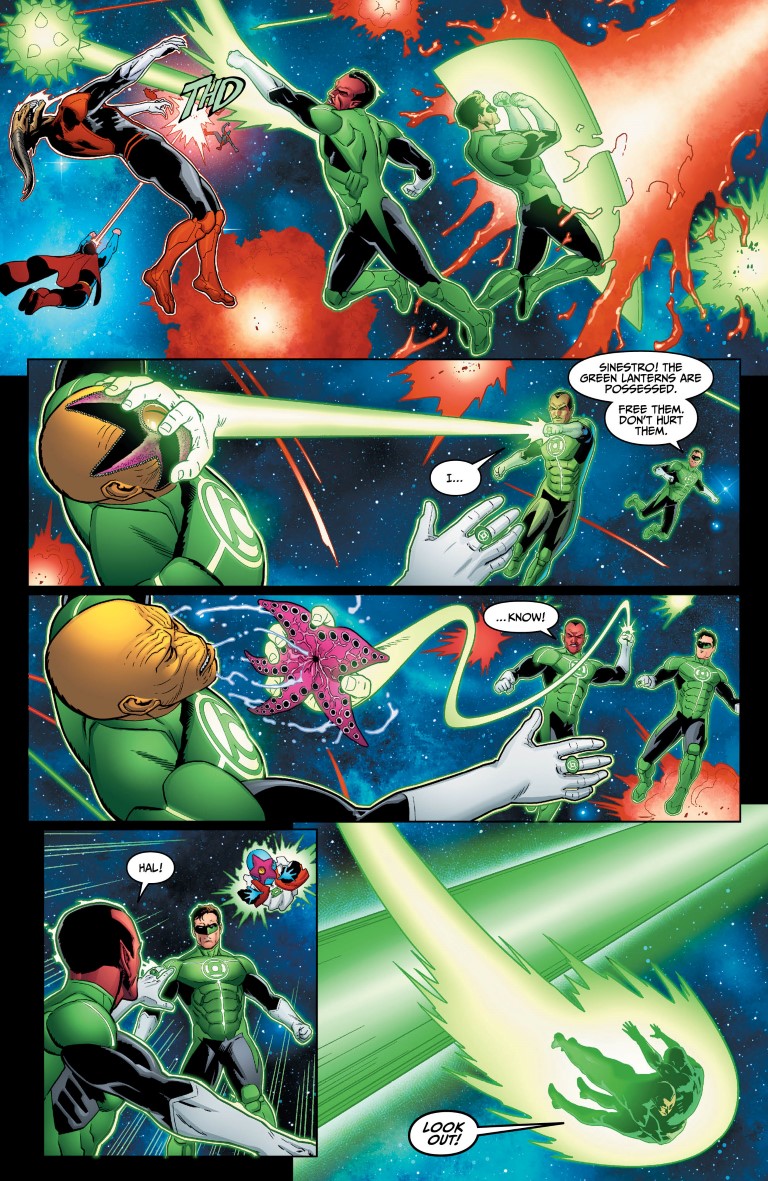 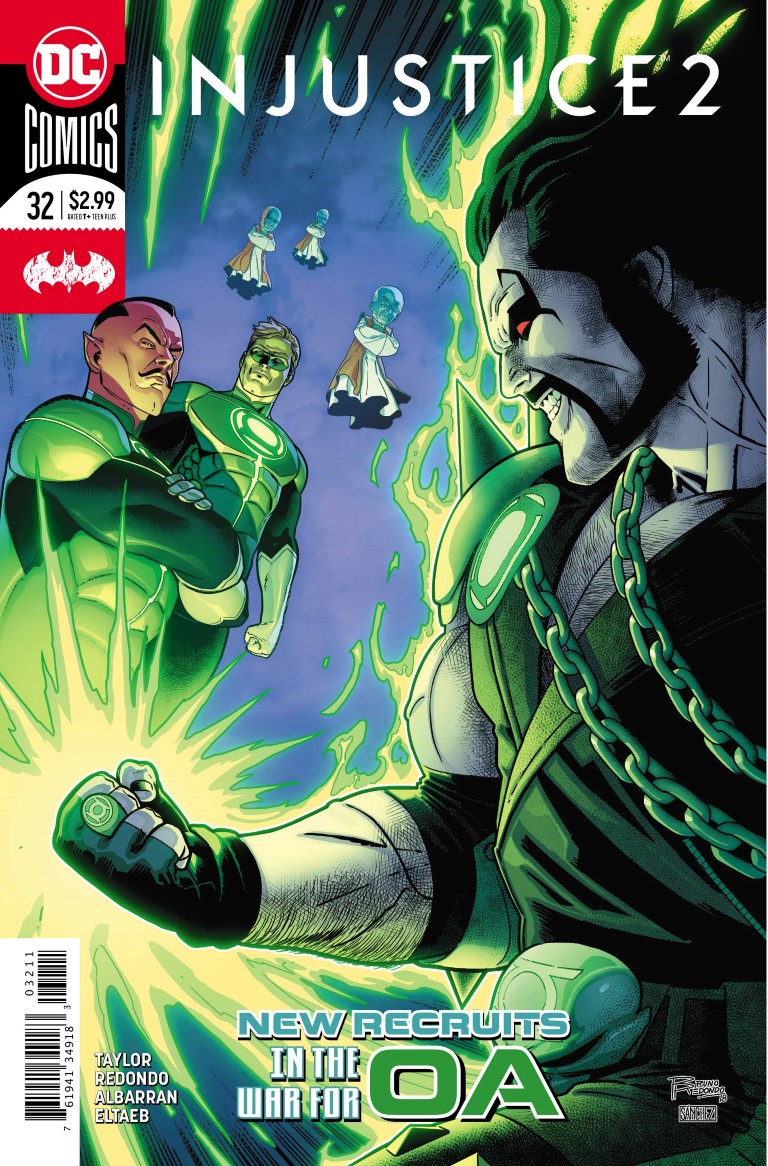