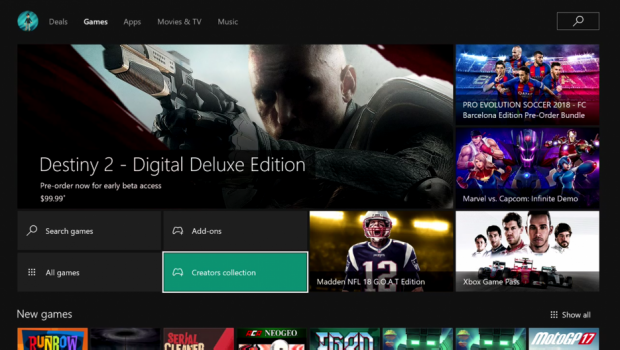 Indie Up! The First Wave of Creators Program Games Are Available Now

Back in March, we unveiled the Xbox Live Creators Program. Starting today, I’m excited to announce that any developer can directly publish their games to Xbox One and Windows 10. And, the first wave of games from the Creators Program are live right now for everyone on Xbox One and Windows 10 PCs! This is an important step for Team Xbox as we continue to deliver a large and diverse lineup of games from creators big and small from around the world.

I’d like to tell you a little bit about the Creators Program, what it means for games to be available in the Creators Collection, why developers should signup, what gamers can expect, and look at some of the first games available starting today.

First, what is the Creators Program? Xbox empowers game developers large and small to create different types of games for every type of players. It’s all about offering a diverse range of games, and this program has that for sure! The Creators Program was established to enable developers to directly publish their games – any of their games – to Xbox One and Windows 10 PCs, with a simplified certification process and no concept approval required.

Developers that publish through the Creators Program have the freedom and independence to develop games that are truly unique, resulting in a collection with games that can be quirky and have varying degrees of polish, but are always interesting.

Here’s a quick look at the first titles that will be available via the program:

Where can you find the games? On Windows 10 the games are in the Games category of the Store. On Xbox One, the games can be found in the Creators Collection, a special section of the Xbox One Store which you can find in the Games section. Why a special section? We think it’s awesome to open up development to anyway with no barriers – no traditional certification, no “concept approval,” and no limitations. But we also listened to feedback from players, parents and developers who let us know they love the curated store experience on Xbox One. This gives us all the best of both worlds: A curated store and a fully open marketplace in the Creators Collection.

For developers, publishing games through the Creators Program is easy. First, you can take advantage of tools you’re already using; like a retail Xbox One console, the free Dev Mode Activation app from the Xbox Store, and game engines like Unity, Construct 2, MonoGame, and Xenko. Second, there are minimal barriers to the program; use a Microsoft Developer account which can cost as little as $20, download the Xbox Live Creators SDK, create your game, and then ship it through a short and simplified certification process. That’s it!

Games published through the Creators Program have access to the full set of social features from Xbox Live, including sign-in and presence, use of your Gamertag, leaderboards, access to your Activity Feed, Game Hubs, Clubs, Party Chat, Game DVR, and broadcasting on Mixer.

As an open program, Creators Program games don’t have access to Achievements, Gamerscore, or internet multiplayer. To access those features, professional developers can go through the ID@Xbox program. Of course, there’s a path for games to move from the Creators Program to ID@Xbox during development (or even after they reach the Store) if a developer decides they want to add Gamerscore, Achievements, or internet multiplayer.

While ID@Xbox was designed for professional game developers who wish to use the full set of Xbox Live features through a full certification process, the Creators Program makes publishing a game accessible to anyone. Whether they’re small or budding studios, hobbyists, makers, teachers and students, or if they’re just learning the ropes – the Creators Program is a simplified way to create and ship games to the Xbox community.

We hope players will enjoy the games in the Creators Collection. You’ll find creative games, some familiar styles, and some brand-new experiences; really, whatever these imaginative developers chose to make. Gamers can expect the Creators Collection on their Xbox One, and the Window Store on their PC, to regularly add new games as developers finish their work. And these are unfiltered games directly from the developers themselves, so your feedback is of course welcomed.

This is just the beginning. We’ll be sure to spotlight more of the diverse array of Creators Program games that catch our eyes right here on Xbox Wire. I can’t wait to see all the games that these developers will create, and of course, I can’t wait to play them. Stay tuned for more, and in the meantime, have fun!