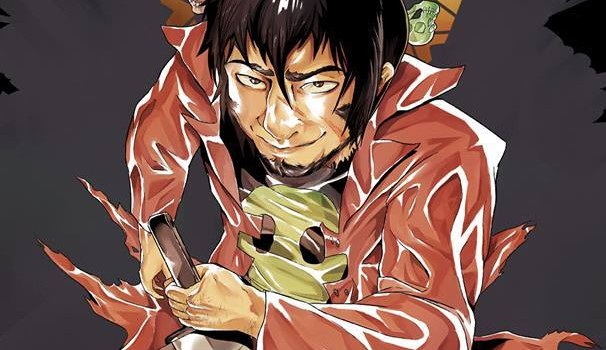 Summary: Vice is the story of "Vice", who seems to be some sort of demon hunter that follows the classic formula

Welcome back to another review of an indie comic series. This week we are focusing on Vice, which is the brain child of Lee Montayer and Jacob Fairy, and looked like one hell of a ride. Let’s just jump right into this piece, see what I felt, see how it made me feel, and after we will break down the comic series so far (without too many spoilers). 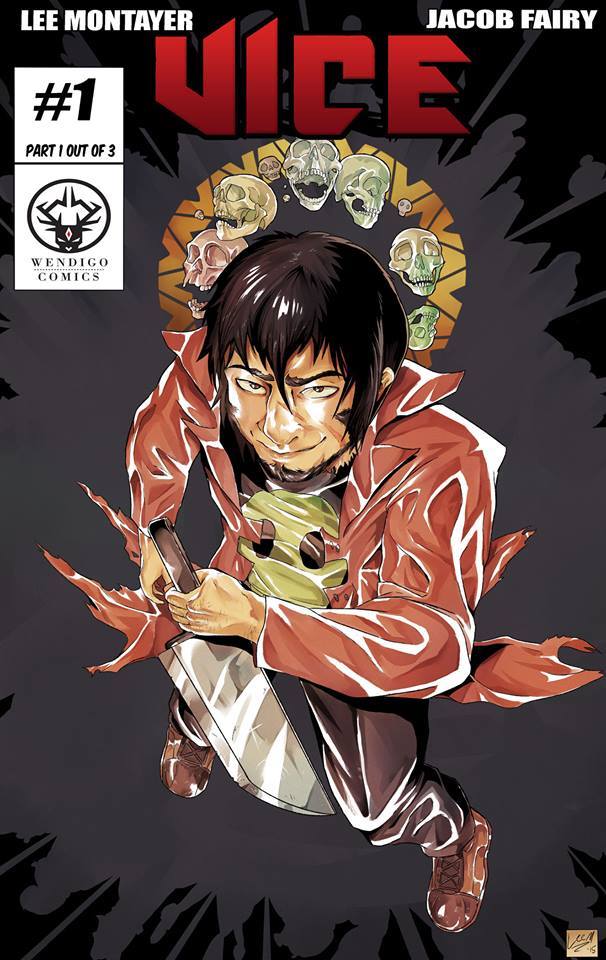 The writing was quite interesting to say the least. There was quite a lot of development throughout the story, and a lot of back and forth among the characters. I had a little bit of trouble following it at parts, just because it kept diving back and forth among several different styles. Comedy, horror, action, and back to comedy, which did take away from the story a little. I am basing all of this on the first issue, as I always do.

The story was catchy, and the overall feel of the comic was there for sure. It was a very original take on the supernatural style. I was glad to see a lot of “Oh dang” moments, which is hard to do in this genre of comic as the market is a bit saturated with them. 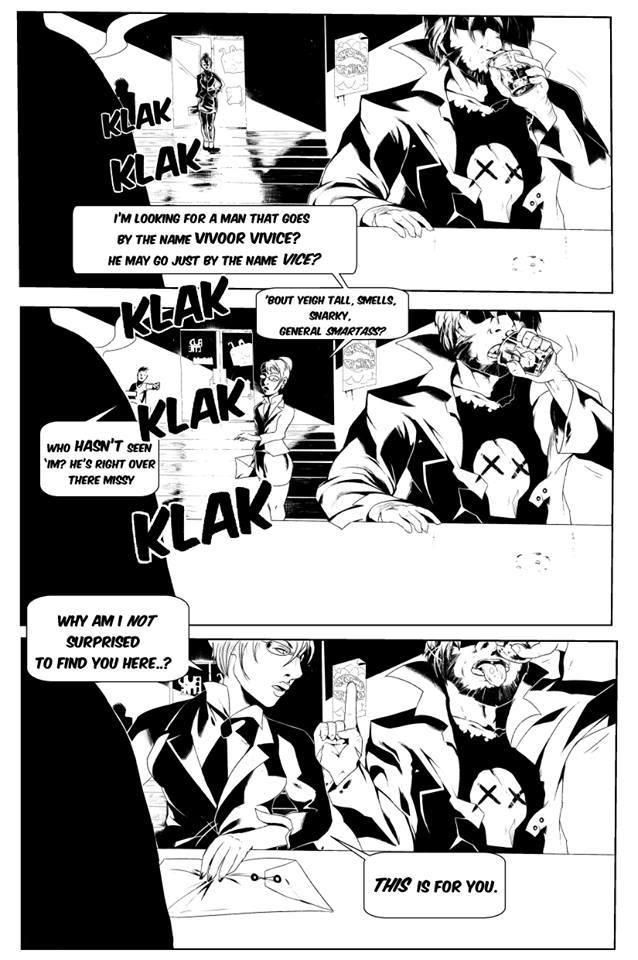 I want to start by saying that the art was decent. The artist was good at his layouts, and panel planning, which is really one of the harder things to do in comics. He had good proportions most of the time, and really had an overall good consistency.

Visually, the demons are really well designed, and honestly they do exactly what they should, they make you feel the incoming terror. Also something I find is not so easy to pull off.

My main issue with this comic is the lettering. The lettering can make or break a comic most times, and in this one, I feel it breaks it. Everyone talks the same, all of the lettering is essentially the same, and 80% of the comic is just one style of font. You need to mix it up, maybe add some subtle difference between characters. Something to show a changing of the guard. 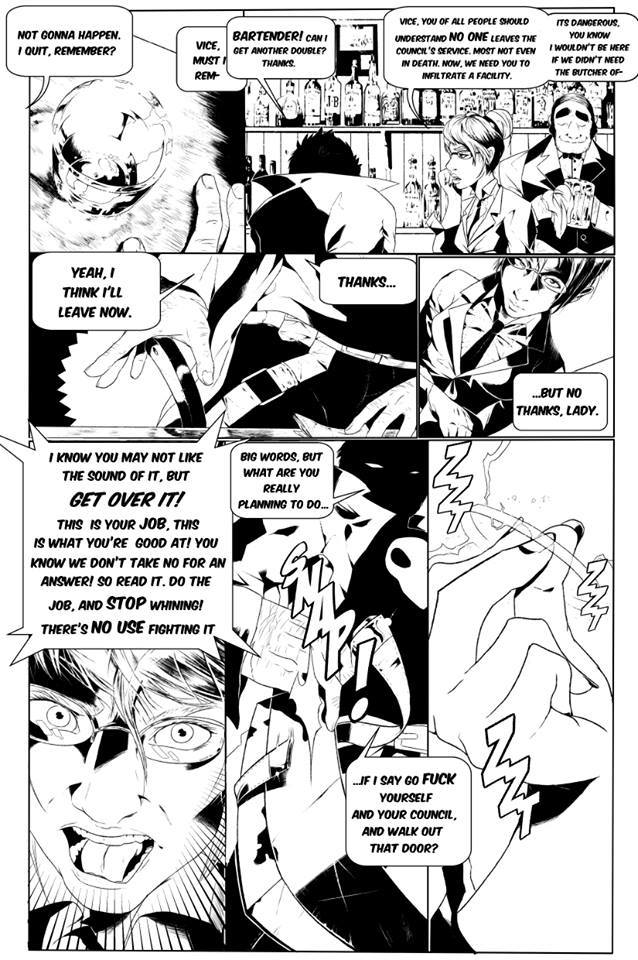 Vice is the story of “Vice”, who seems to be some sort of demon hunter. He is recruited in the beginning by a super bad ass woman, complete with gun, sword, and a quick attitude. Arriving at his destination, he is greeted by a rather large woman who just watched as her boy tore his own skin off. Ensue the hunt, battling, and the super baddie coming in at the end. A classic tale!

Let’s see what Jacob had to say!

Vice started out very simplistically. I had an image for a panel in my head from a dream or what not that i had once upon a time. A classic view over my shoulder as a beautiful woman walked through the bar door. That turned into the first panel, and then from there i just kinda rolled with it, I asked myself “Ok, so she’s here for him, but why?” and then from there i just buckled down and wrote the story as it progressed.

Working with Lee was a great experience. I gave him the script and he would shoot out drafts almost daily for me to look at and edit. I would bounce ideas off of him for scenes and a number of the creepy crawlies that are in the book and we would sketch out this crazy gruesome and just jaw-dropping creatures and characters. It was all very organic, which is what everyone should aim for when making a comic. A couple of times He would even come to me and say “hey, so i like this panel, we should make this a full page and really delve into whats there.” or “I’m going to add this battle scene here I’ve got some great ideas” and it truly helped elevate the comic to the next level. All in all, that partnership and open communication was the best process I’ve had so far in making comics.

My advice for those who are thinking of doing their own comic, is to constantly strive for excellence and to always try harder and different things in each outing. Really make what you want to see in comics! The more different a story is, the more it sticks out! Don’t look for your peak,don’t look back and say “yeah, that was the best i could do” because then you stagnate and you fall backwards and readers can tell that right off the bat. A good way to to go about this and get better with each try is to listen to those that have constructive criticism for you. If someone says “Hey, i think your story would benefit from slowing the pace down, or delving into the backstory a bit more” then take that to heart, listen to them, and then if it fits with what you have envisioned, act on it. But leave the the knuckle headed fanboys who will say”this story is crap” and not give a reason. They will give you no forward momentum and end up being nothing but dead weight.

You can pick up your own digital copy of Vice right on our facebook page  https://www.facebook.com/Comiceater

Thanks Jacob, for making an interesting read. Keep in mind all, it is a good story, well written. For an Indie Comic, well done!